Talks about the expansion of the RU-Pass to include unlimited air travel are underway between the Ryerson Students’ Union (RSU) and Air Canada, The Eye has learned.

Following the not-at-all controversial approval of the RU-Pass, a discounted transit pass that works on all forms of transportation on wheels within Canada, RSU president Ram Ganesh has confirmed the student union is looking to incorporate unlimited flights next.

“In its current form, the RU-Pass takes care of the everyday transit needs of students in the GTA, but what about our out-of-province and international students?” Ganesh said.

“The AIRU-Pass has to be our next step. It just makes sense.”

He said that the mandatory AIRU-Pass would cover unlimited rides on foot, bicycle, bus, subway, streetcar, train and airplane at a “reasonable rate.” 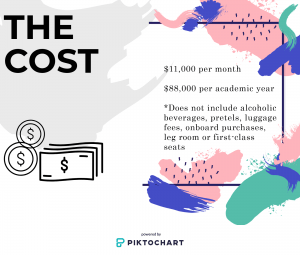 An Air Canada spokesperson estimated the AIRU-Pass will cost about $11,000 per month—a total of $88,000 per academic year. That sum doesn’t include alcoholic beverages, pretzel snacks, luggage fees, onboard movies, leg room or first-class seats, the spokesperson said in a statement.

“We get a lot of complaints. We don’t acknowledge the students that have to commute via Boeing 707-138B every day, and rightly so—out-of-province and international students shouldn’t have to pay the ridiculous rent in Toronto,” said Savreen Gosal, vice-president operations for the RSU.

“Forget the Beach Floor of the SLC, the AIRU-Pass will allow students to travel to an actual beach in Cuba, California, Mexico or anywhere else in the world between classes,” she said.

Ganesh said he is 99.9 per cent sure the RSU will be able to secure an opt-out for students who live on campus, bike to school, take the TTC and commute via GO Transit. However, he said students must vote in favour of the AIRU-Pass before the RSU can begin to negotiate opt-out procedures with Air Canada.

It is still unclear whether this deal will cover helicopter, skydiving and rocket trips.

The referendum will run from Dec. 25 at 8 a.m. until Jan. 1 at 4:30 p.m (Well, that’s what the dates their advertisements have on them, so it’ll most likely end on Dec. 31.) Polling stations will be set-up somewhere in the Kerr Hall basement.

Since the RSU spent all their referendum money on waffles and their private victory after-party, the stations you’ll see around campus will reportedly be BYOB (bring your own breakfast).