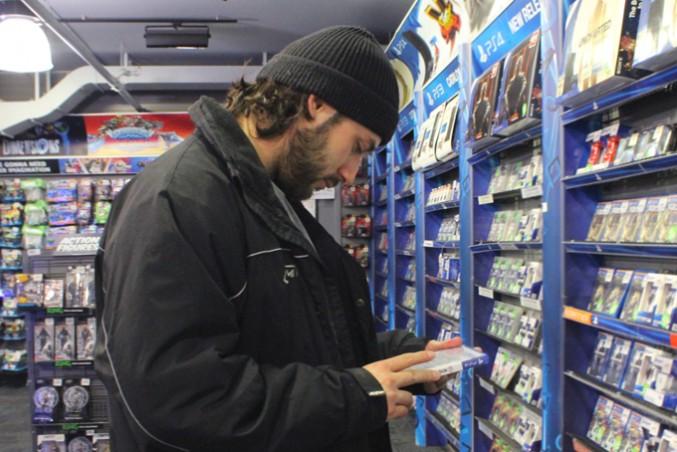 On the ice and off of it, Michael Fine keeps everything in perspective.

The captain of the men’s hockey team is quite possibly its best playmaker, and Fine’s vision of the ice and sense of timing and positioning are focal points in his game.

“He makes all his line mates better,” says now-former teammate Mitch Gallant, who played his final season of Rams hockey this year on the team’s top line with Fine. “He finds open ice — you just have to get to that open ice and he’ll find you every time.”

Fine knows that his playmaking ability and on-ice vision are among his top assets as a hockey player, but he isn’t about to define himself by them, or by any dimension of his sport — regardless of how much he loves it.

When asked about being able to separate himself from the game, Fine says, “Absolutely, that’s important. Hockey’s hockey, but it’s not everything, right?”

Fine, a North York native, joined the Rams in 2012 after a five-year career in the Ontario Hockey League (OHL), where he played for the Sault Ste. Marie Greyhounds, the Kingston Frontenacs and the Saginaw Spirit.

In high school, Fine played for both the hockey and baseball teams but like many multi-sport athletes, he phased one sport out to focus on the other as his OHL draft year approached. When the Greyhounds selected him in the third round of the 2007 OHL Priority Selection, 52nd overall, the 15-year-old Fine left home to live in the town of the league’s farthest-flung franchise.

“They go away as kids and they come back as men,” says Fine’s father, George Fine. “[Sault Ste. Marie] is pretty far to call mom or dad if there’s trouble there. They have to grow up, and it probably matured him a lot faster than other kids.”

After his time in junior hockey, Fine, now 24, considers coming to Ryerson a watershed moment for contextualizing hockey in relation to everything else.

“A lot of it comes with one chapter, one side of life, ending in your junior career, and something else beginning,” he says.

Now in his fourth season with the Rams, and second as their captain, the left-shooting centre makes a point of bringing a level head and an open mind to his role as a team leader, constantly working to set an example for his teammates.

“Hockey’s hockey, but it’s not everything, right?”

“He’s not really a rah-rah guy but if something needs to be said, Mike will say it,” says head coach Graham Wise. “He goes about his routine the way he’s comfortable with, the way he knows he can best prepare himself, and I think that’s maybe the way he looks at life right now.”

Fine tries to instill in his teammates the same perspective that keeps him grounded, especially when they’re struggling.

“You have to know when you have to speak,” says Fine. “You just have to try and keep them even keel, keep them at the task at hand, and let them know that if you work hard, things will get better.”

Even in school, Fine is driven by a desire to broaden his worldview, working towards a degree in arts and contemporary studies.

“I’m pretty into theories and what people think,” says Fine. “I’ve learned good qualities through ACS, [like] being more open to people and their points of view.”

Fine’s passion for sports extends to his affinity for video games, with EA’s NHL and FIFA series ranking high among his games of choice.

“When I play him, he beats me pretty bad every time,” says Gallant. “I’ve never beat him at anything.”

With his final season of Rams hockey and another year of school yet to come, Fine isn’t focusing on his future after Ryerson. He hopes to be involved in hockey for years to come, with a year of Rams hockey left to earn looks from professional teams in North America and Europe, but he doesn’t have tunnel vision.

“The good thing is, there’s opportunity, and it’s really, ‘How much do I love hockey?’” he says. “It would be whatever fits right for the moment.”

Fine has also bounced around the idea of starting a hockey school, having been told on numerous occasions that he has the makings of a coach.

For now, Fine’s long-term goals are, not surprisingly, rooted in a larger perspective on life.

“To be successful in whatever it is, whether that is hockey or trying to start a career [in something else],” he says. “To just be satisfied and happy with everything that I’ve got.”