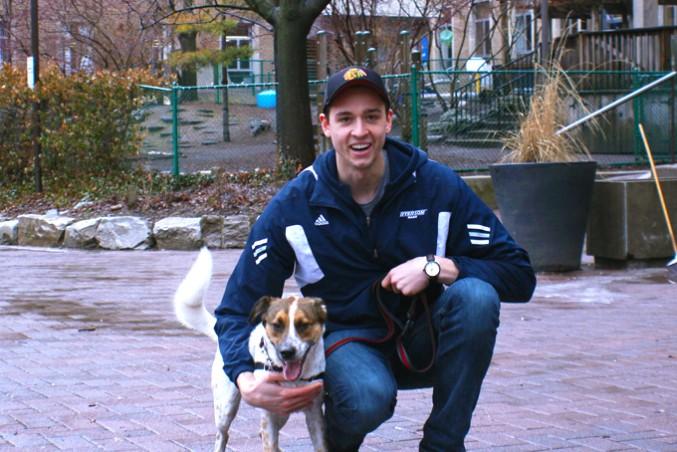 Robert Wojcik was one of the most feared outside hitters in the OUA. But he didn’t start off playing volleyball. Instead, until he was 11 or 12, he was a competitive swimmer. One day, after a session in the pool, Robert told his father, Marius, what he really wanted to do.

“[Robert] left the pool, he put the bag in the car and he said, ‘I am not going to swim anymore, I am going to play volleyball,’” Marius says.

“[Robert] left the pool, he put the bag in the car and he said, ‘I am not going to swim anymore, I am going to play volleyball,’” Marius says.

Ever since then, volleyball became one of the biggest parts of his life. However, it’s not too surprising Robert chose volleyball. His father played professionally in Poland and coached Robert when he played for the Durham Attack until he was 18.

“I think he always wanted to follow in the footsteps of his father,” says his mother Barbara.

“He’s always been a role model in volleyball for me,” Robert says.

Starting at 14, he’s played much of his career alongside fellow outside hitter Alex Dawson, who, like Robert, was a senior on the Ryerson team. Marius recalls what Robert and Dawson were like when they were teenagers relatively new to the game.

“They looked like little puppies, they were uncoordinated,” his father says.

Over the years, the two grew together both on and off the court. Robert says he and Dawson are the two biggest nerds on the team. They built their own computers together by following YouTube tutorials. They also play video games against each other and can regularly be found in front of their computers with their headsets on engaged in heavy trash talk. Robert insists that Dawson isn’t better than him like he would say, it just depends on the game.

Robert was a force in his five seasons with Ryerson, ranking near, or at, the top of the team each year in kills, service aces and took home team MVP honours for the 2013-14 season. He finished his career at Ryerson as one of the most decorated players in team history. The Rams finished the season earlier this month with a solid 14-6 record in the OUA and qualified for the CIS national championships for the first time in school history. Their season ended at the hands of the Laval Rouge et Or in the consolation final, placing the blue and gold seventh in the country.

Robert lives close to campus with his girlfriend, Lauren Sokolowski, whom he met at Ryerson. She played for the women’s volleyball team for five years until she graduated last year. The duo also have a dog named Cooper, an Australian Cattle breed mix. Robert doesn’t find he has a lot of free time between school and volleyball, but the time he does have is often spent gaming with Dawson.

He isn’t exactly sure what line of work he wants to get into when he graduates at the end of the semester, but whatever it is, it may have to wait until his volleyball days are over. Robert says he has plans to play professionally in Europe.

“I would obviously love to play in Poland because that’s where my family is still, it’s just my parents that are here in Canada, so staying in Poland would always be really cool,” he says.

“I would obviously love to play in Poland because that’s where my family is still, it’s just my parents that are here in Canada, so staying in Poland would always be really cool,” he says.

The professional leagues in North America are non-existent, so playing overseas is the only option on a professional level. But that’s not all he wants to accomplish on the court. Robert would “absolutely” want to try and make Canada’s national team one day and going pro is the first step. He has previously attended team Canada’s camp, but wasn’t able to crack the roster. However, the experience helped him a great deal.

“You’re constantly practicing and playing with the best players in the world, and how else do you get better?” he says.

It’s impossible to look at Robert Wojcik strictly off-the-court. Sure, there are the video games, Cooper, his girlfriend and his friends and family. Not just his father, but also his mother, who helped him keep his studies under control and made sure he always did his homework. While he has the life he wants outside the lines, what happens in them is what he’s always loved as much as anything else.

“Robert has always lived and breathed volleyball, the game is in his heart,” his mother says.

Who knows what kind of swimmer Wojcik would have turned out to be had he not told his father he wanted to try something else. But based on his Ryerson career and his potential for the future, it’s hard to imagine he made the wrong choice. So while his volleyball career at Ryerson is at a close, he hopes the next chapter is just beginning.