Vending machines around campus are continually being vandalized and plundered.

A wave of vending machine robberies on campus is costing Ryerson a small fortune.

Aramark, the company that provides Ryerson with pop and snack machines, says Ryerson is losing thousands of dollars to campus thieves.

“In the busy hallways, like Kerr East, the machines can get $1,000 a day,” said Mike, an Aramark representative, who didn’t want his last name published. “Ryerson takes commission and they’re losing a fortune.”

Mike said the looters make a hole in the machine by forcing a crowbar into the tiny crack just above the change slot. They then put a vacuum hose into the hole and suck loose change from the broken and unusable vending machine.

Of the 101 machines on campus, 80 have been robbed, says Mike. When machines are repaired, Aramark installs a safety mechanism to prevent thieves from using the same method of stealing. Mike says this measure hasn’t stopped the robbers, who use a blowtorch to make a hole at the front of machine in order to get their vacuum hose in.

“They’re reckless,” said Mike. “They don’t give a shit. I have to laugh or I’ll go crazy.”

From Friday night to Saturday afternoon, Mike says 18 machines were broken into. Mike is personally offering a $1,000 dollar reward to anyone who can identify the vandals. 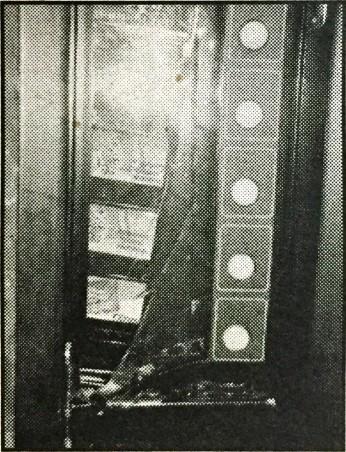 “I worked Saturday and Sunday for free,” he said.

Some of the machines are robbed every week, and because the change slot breaks in the process, students wonder why the machine is continually jammed. Many of the vending machines have been turned off until they can be raired.

“I fix, on an average, three of four machines a day,” said Ernie Briggs, Aramark’s campus repairman. “On some days I have to do 10 or 15. I’ve become efficient at it. It used to take me hours, but now I can do it in 15 minutes.”

Aramark reports significant vending machine losses at other universities during two times of the year — the beginning of the school semester and before Christmas. Ryerson, on the other hand, has had a steady loss for the last nine weeks.

“I want to put a sign up that says ‘out of order due to vandalism,’” says Briggs. “If they become too damaged, we have to replace them.”

Mike says that students are still losing money in the broken machines, even though lights indicate that they are not working.

“We’ll have to put tape over the coin holes,” he says.