On a biter cold night in late November, thousands of Toronto Maple Leafs fans gather with tickets in hand around the gates of the Air Canada Centre, waiting anxiously to take part — if only as spectators — in a friendly war, as it seems,against their arch-nemesis, the Montreal Canadiens.

As the hissing crisp wind voices its path through the growing crowd around the building on Bay Street, a handful of fans wearing red jerseys proudly displaying the Canadiens’ “C” are all that contrasted against the blue ocean of Leafs fans.

Inside, as the game starts, it’s enough to listen to the exchange of insults and scattered statistics from past games between Leafs fans and Canadiens fans to know which team is winning. At 1:29 of overtime, the game tied 3-3, Mats Sundin gets the puck deflected back to him from a shot off a Montreal player. He wastes no time in shooting it past Montreal goalie Jose Theodore, scoring the game-winning goal.

Instantly, the building roars to life as thousands of excited fans pour out chanting “Go Leafs Go,” having defeated the team they love to hate.

This ardour of competition flowed through Torontonians’ blood long before the Leafs were made, by virtue of home and history, heirs of such long tradition. It was at a building originally built to serve as an opera house where the history of love and hate between the Leafs and Canadiens began; at the same building where the first Stanley Cup was awarded in an NHL season, and by none other than our city’s heroes. 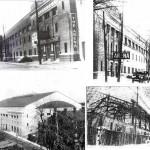 It was the building where everything begins. The date was Christmas Day, 1912. It was a mild winter night with temperatures hovering above freezing — 32 F, as the metric system had not yet been accepted in Canada.

A crowd of nearly 4,000 people gathered at newly opened Arena Gardens, situated on Mutual St., just south of Dundas St. The crowd, consisting mostly of men wearing suits and ties and holding top hats and canes, buzzed with conversation of business and the advancing war in Europe as it waited to enter the arena.

That night, 94 years ago, the first hockey game with a Toronto team composed of professional players was celebrated. The opening game of the National Hockey Association (now the National Hockey League) was played by the Toronto Blue Shirts and the Montreal Canadiens. The Toronto professionals had taken the lead late in the second period as the crowd, swarming with Toronto fans, roared with excitement before the few scattered Canadiens fans.

However, the excitement would only last until the next period. The Blue Shirts were beaten 9-5, prompting this Toronto Star headline the next day: “Superior experience beat Toronto in first pro. game.” The crowd sat in silence and dismay as the game came to an end. The fans felt a direct hit when their team lost a game they appeared to have under control.

It was there, at the Arena Gardens on Christmas Day of 1912, that the Toronto-Montreal rivalry began. “It certainly began that day. But it wasn’t only about a sports team losing a game to another sports team that sparked the whole deal,” explains Scott Bell, freelance TV producer and amateur historian.

“The grudges between the Catholics and Protestants had been brought from the old country; hockey was just a new excuse to let it out,” Bell says.

When Arena Gardens opened on October 7, 1912, it was the largest indoor arena in Canada, with 8,000 seats and a hockey rink measuring exactly 200 feet by 80 feet. The building, with massive steel trusses spanning its entire width, was the first of its kind in North America, coming with a price tag of just over $500,000.

It was originally built to serve as an opera house, but management and investors soon realized they would make more money if it were a professional hockey arena. The inauguration of the building was led by a six-day music festival. The Blue Shirts would only keep the name for three years until 1915, when E.J. “Eddie” Livingstone purchased the team and changed it to the Toronto Arenas.

Three years later, in a newly formed league, the Toronto Arenas won the first NHL Stanley Cup. Arena Gardens saw a total of 19 hockey seasons, during which the home team changed its name from the Blue Shirts, to the Arenas, to the St Pats (St. Patrick’s), to, finally, the Maple Leafs.

In November of 1931, the Maple Leafs left Arena Gardens for the newly built Maple Leaf Gardens. It was a move which many Toronto fans felt was unnecessary. Arena Gardens was a symbol of the city’s hockey history, and a reminder of a much simpler past — as expressed by an article in the Star on Sept. 19, 1989. “(Arena Gardens) — a symbol of a less materialistic, less alienated era when people loved to have fun after a hard day’s work.”

But the city was growing and a larger facility was needed to house the rapidly growing hockey crowd. After the Maple Leafs left the arena on Mutual Street, no other form of professional hockey was ever played there. In 1932, Arena Gardens was renamed Mutual Street Arena and opened its door to all kinds of events. Bicycle races, boxing matches, and bands were featured in the building.

Amongst those to appear at Mutual Street Arena was the 17-piece band led by Glenn Miller on Jan. 23, 1942 — the only time he appeared in Toronto. Other big shows include the city’s first boat show; the Melody Fair, which in 1954 became a Toronto tradition; and a two-night special with a young Frank Sinatra in 1948.

In 1962 the arena suffered yet another name change and became The Terrace. It would continue with that name until its demolition in 1989. During the 1970s it served as a roller rink featuring restaurants and other attractions, but by then it had lost its charm and became an increasing burden on its owners. During the late 1980s new owners stepped in with the idea of demolishing it to build condos and co-op buildings.

A few passionate groups rose to the defence of the historic building facing annihilation, and protested to city hall. But in the end, money made history a victim of its profit-driven trail. The building was demolished in 1989. Those who remembered the opening day musical could hear the bands play as the building was being demolished.

With every beat of the drum a new piece of the building thundered to the ground. With every crash of the cymbals, a yellow truck screeched its arms against the ground. Then, when the last note left the building, the dust settled over the site. Arena Gardens now lies only in our memories.