Kai Benson looks at the gender pay gap at Ryerson

Canada has one of the highest gender income gaps out of 30 industrialzed countries belonging to the Organisation for Economic Co-operation and Development (OECD). There was roughly a 20 per cent difference in salaries in 2008. Much like any other business or institution, Ryerson still tends to pay its female professors less than their male counterparts.

“Speaking anecdotally to colleagues around the university, there does appear to be a difference between male and female salaries,” says Anver Saloojee, president of the Ryerson Faculty Association. Saloojee could not provide specific data, as employee salaries are confidential for those who make under $100,000 a year. Still, on the 2010 list of Ryerson staff making more than $100,000, only about one third were women.

“We do see gender anomalies in salary but most of those are at point of hire,” says Saloojee. “If there’s a problem, that’s the point at which a critical challenge lies.”

If two people enter the same position at the same time for different salaries, the lesser-paid individual will never be able to catch up as long as the other employee continues to work the same job. “The individual faculty member in a particular department is offered a position and then negotiates a salary with the dean of that department,” says Saloojee. “If you and I have a different salary at the beginning, that carries forward all the way to retirement.”

Jean Golden, a professor of sociology who has worked at Ryerson for 40 years, says she was hired for less than a male friend with the same degree and same experience. Back then it was clear the evaluation was based on gender, she says. “He was always paid one level higher.” He retired about five years ago, and she says the difference added up to about $400,000 dollars over the 35 years they worked.

Staff at Ryerson can apply for a “salary anomaly adjustment,” where three members of the RFA and three university representatives examine a possible inequality and make a salary adjustment. Golden has received adjustments twice, both in recent years. The first bumped her base salary by $1,000, the second by $500. “Maybe I’ll make another $10,000, but it certainly won’t offset the $400,000.”

Jacquie Chic is a politics professor and vice president of campaigns at CUPE local 3904, the union that represents contract faculty and teaching assistants at Ryerson. She says that there is no gender wage gap within contract employees, but that women are far more likely to be a part of this lower-paid group. “We don’t have the same wages or benefits as tenured faculty.”

Chic says part of the problem is that once you start as a contract employee, it can be difficult to get out of that trap. “We make far less than tenured faculty, so the university has an interest in offering someone like me a contract, rather than a more lucrative position.”

Ryerson’s leave policies don’t directly cause an income gap for faculty, as up to 17 weeks of maternity leave and up to 37 weeks of parental leave are covered (at 93 per cent of regular pay) and salary increases are still granted regardless of time off, as long as it is paid leave. However, women are still far more likely to work part-time to take care of children than men. According to Statistics Canada in 2010, when women were asked why they work part-time, 19 per cent said to provide care for children or other family responsibilities, compared with two per cent of men.

James Brown, a philosophy professor at the University of Toronto who works with gender and equity issues, said that the matter has been with us for years. There are fairly easy remedies he says like a compensation fund for female faculty up to the point where they meet average male incomes and actively urging those who make merit pay decisions to make sure they are not disadvantaging females. “Overcoming all the biases at work in one’s evaluation of others is quite difficult. They may honestly believe they are being fair, but the numbers tell a different story.”

Graphic: How starting at a higher salary adds up over time (click to enlarge) 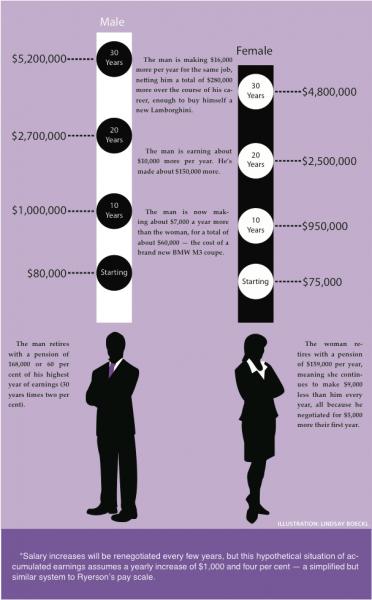