Like any good superhero, Eggy the Ram lives a double life — a student by day and a party animal by night.

Jeremy Pearl, a Ryerson graduate, was Eggy in 2012-13 and agreed to tell all about what it’s like behind the mask, a story never before told on the record.

“When you’re in a suit, when you’re acting as a mascot, you’re willing to go a little bit crazier,” he said.

The radio and television arts (RTA) graduate, who now does freelance work with Sportsnet and CBC, got the Eggy gig by working for Ryerson athletics, running their Twitter account.

His first time in the suit just  happened to be for, according to Pearl, the biggest game in Ryerson basketball history.

The Ryerson men’s basketball team had made it to the Ontario University Athletics (OUA) final four in 2012 and upset the Lakehead Thunderwolves to send them to the national championships. The team had not been there in 10 years.

“I was going nuts — cause I’m a fan myself and because I was Eggy,” Pearl said. “So I was just trying to pump the crowd up as much as possible.” 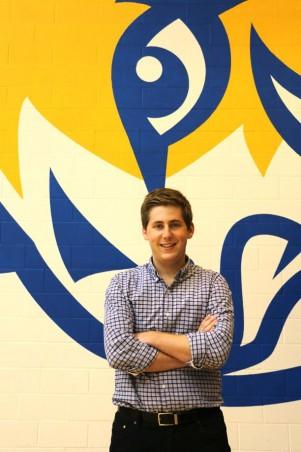 Another graduate, ARi Lyon was Eggy between 2008-10 when the costume looked a lot more like a dog.

“Eggy was fuzzy and adorable when I did it,” he said in an email.

Lyon’s first experience with the suit was a hot one.

“It smelled terrible and the fan in the head was broken so I was dripping sweat within minutes,” he said.

Lyon’s version of Eggy tended to perform stunts during Rams games. He said his past experience with a Russian circus helped him with his tricks.

“I would take off the jersey he was wearing and go ‘streaking’ through a game,” Lyon said. “[And I would] throw myself down the bleachers just to freak people out.”

Pearl said that he was a little short for the ideal height of the “one size fits all” costume, but he was able to get around it by making the best of the platform shoes that come with Eggy’s outfit.

Pearl said it is really hard to see out of the eyes and so he needed a handler to keep an eye on him.

“Your peripherals are really shot, and you can only really see straight forward,” he said. “Some weird things would happen … I’d be taking  a picture with someone and they would, you know, grab my butt.”

Kristen Burkard, Ryerson’s mascot coordinator, said Eggy “exemplifies the true Ryerson spirit, reflecting the heart and passion of the student body through a commitment to optimism, sportsmanship, and the pursuit of excellence through entertainment.”

This was important to Pearl, who said that if there’s a five-year-old waving and [the mascot] doesn’t see them, “you look like a dick, and you can’t have Eggy look like a dick.”