Best tallied 30 points, ten rebounds, and one emphatic finish on an alley-oop that had the fans in the Mattamy Athletic Centre going nuts.

“I was so into the moment,” said Best, commenting on his alley-oop. “Words can’t describe it man.”

The other high scoring Rams included Adika Peter-McNeilly with 18, Jordon Gauthier with 16 and Kadeem Green with 15 key points off the bench.

The Rams got off to a hot start, going up 30-12 after the first quarter on the strength of a 23-0 run. Almost every shot they attempted seemed to be hitting all mesh. 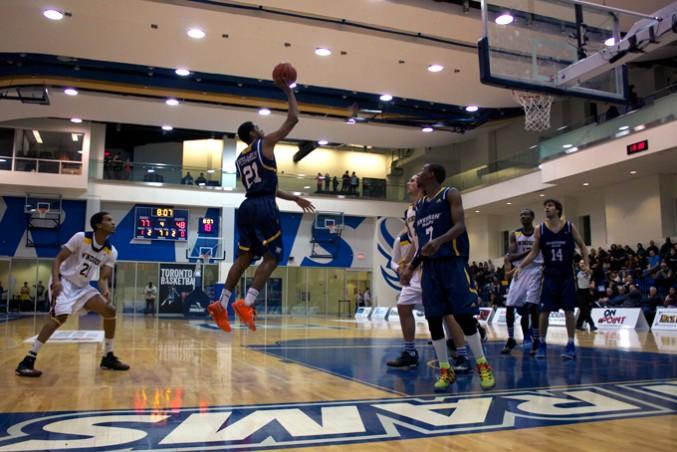 The Lancers tried everything to slowly chip away at the lead, at one point bringing it down to nine points. But another massive 21-8 run from the Rams to end the third quarter put Windsor out of it for good.

Ryerson shot the lights out from downtown thanks to great ball movement, hitting ten of 25 three-pointers. They also outmuscled the Lancers at every opportunity, coming out with a 47-30 advantage in rebounds.

Point guard Jahmal Jones wasn’t a leader in points but his career high 15 helpers tied an all time Rams record for assists in a game.

With this win, the third ranked Rams have a lot of momentum going forward, but they know the journey is a long one.

“We have some things we still have to work on,” said Best. “But overall I think we did a great job as a team.”

The Rams will try to stay undefeated next Friday against Laurentian in game three of their current four game home stand.