While the New Year saw students return to Ryerson for a fresh semester of classes, the Ryerson women’s and men’s volleyball teams found themselves on the road to start the second half of the 2014-15 Ontario University Athletics (OUA) season.

The teams each played five consecutive matches away from the Mattamy Athletic Centre (MAC) from Jan. 10-25.  The men went 4-1 over that span to improve to 12-4 on the season, while the women’s team went 3-2 for an 11-4 record on the year.

The women defeated Lakehead, Windsor and RMC and lost only one set over those three matches, but were also upset by Western, which had just three wins on the year. The men downed Waterloo, Windsor, Western and RMC, winning 12 of 14 sets.

Both teams lost 3-0 to Queen’s on Sunday night in the final road game of their respective regular seasons.

“It leaves a bad taste in the mouth,” men’s head coach Mirek Porosa admitted after the Gaels upset his team to snap a six-game Ryerson winning streak dating back to Nov. 28 and denied the Rams a perfect road trip. “But sometimes it’s good to lose after a number of wins.  [You] refocus and get hungrier for the home games.” 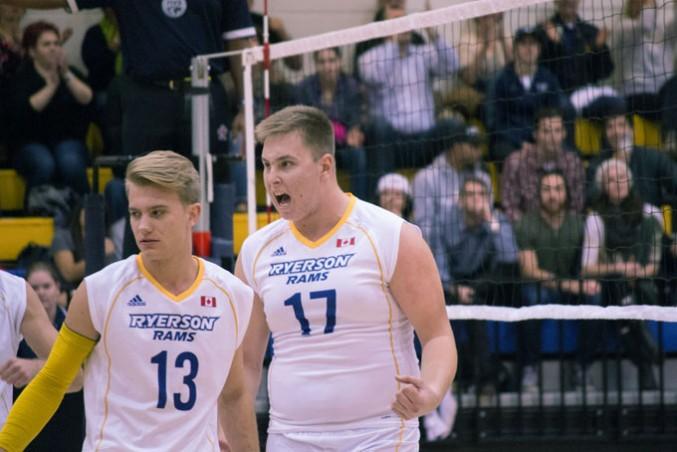 Despite the disappointing conclusion to their road trips, both Porosa and women’s head coach Dustin Reid saw plenty of positives from their teams through the first five games of January and used the streak of away games as a chance to gauge the growth of their players.

“When people are taken out of their comfort zones it creates challenges, but being an athlete is all about how you respond to adversity,” said Reid. “We’ve had some great moments on this trip, and we’ve lost some games where we thought we deserved better, but more importantly we’re glad to have these [types of games] in January because it gives us a chance to see where we have to improve and gives us a chance to do that.”

Several Rams on both squads continued to build on already impressive seasons. Third-year outside hitter Veronica Livingston had a career-high 24 kills in the women’s five-set loss to Western, while second-year outside hitter Lucas Coleman reached a new career high with 25 points in the men’s 3-1 victory over Waterloo. Livingston ranks first among all female OUA players with 3.85 kills per set, while Coleman sits third among male players with 3.74 kills per set.

Following the road trip, the men’s team sits in second place in their 11-team league with 24 points, trailing only McMaster.

The women’s loss to Queen’s means the Rams and Gaels are now tied for third in the OUA East with 22 points apiece. The Rams currently have a match in hand and the teams split their season series with each team winning once.

The teams will play their final four games of the regular season at the MAC. Each will face Nipissing, York and U of T over the next two weeks before the women battle Ottawa and the men take on Waterloo in the regular season finale on Feb. 8.

Both teams are next in action on Friday, Jan. 30 versus the Nipissing Lakers. The women’s game begins at 6 p.m. with the men’s game to follow at 8 p.m.