The Ryerson men’s hockey team were handed a first-round sweep at the hands of the Toronto Varsity Blues on Feb. 14. With the season now over, the future is one step closer for these student athletes.

For defenceman Brian Birkhoff, the reality of graduation is now only one year away. Despite this, the 23-year-old has a vision of the future in the sky.

“One of my passions is flying,” he said. “A couple of my family members are pilots and that’s something that I’m looking into. I would love to be a pilot of a Boeing-747. I’ve always loved those planes.”

Birkhoff played for the Ottawa 67’s, Peterborough Petes and Gatineau Olympiques before joining the Rams. But despite the aspiration to fly, he said he’d like to keep life after hockey far away.

“It’s something that hopefully is a long way in the future,” he said. “I’d like to play some hockey after this as well.”

“I don’t really think about [graduating] because that’s another 30-plus games away, but it will be an interesting feeling when the time comes,” – Brian Birkhoff

The native of Richmond Hill, Ont., says his dream is to play pro hockey in Europe when his time is up at Ryerson. Birkhoff played his 100th-career game in the Ontario University Athletics (OUA) Feb. 7, and plans to finish his eligibility by returning next season.

“I don’t really think about [graduating] because that’s another 30-plus games away, but it will be an interesting feeling when the time comes,” he said.

Unlike Birkhoff, fourth-year forward Chloe Richardson aims to keep her feet on the ground when she graduates in the spring. But her sights are set high. Richardson has applied to ten different law programs across Canada and acceptances have begun to flow in.

Still, she was in no rush to leave. The team was in a big push to make the playoffs for the first time and Richardson was determined the team would get there. 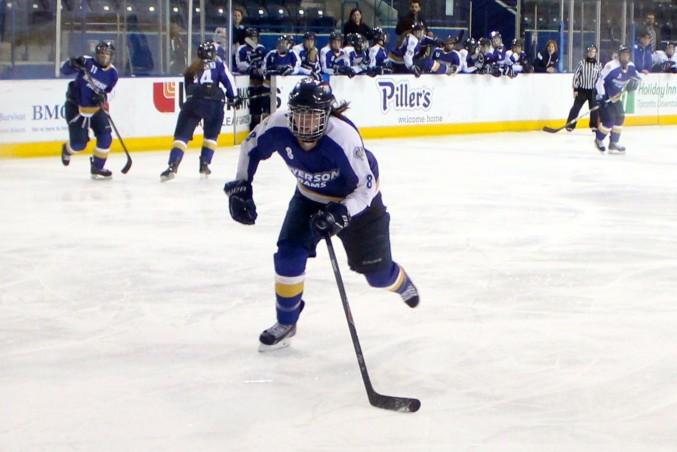 With a program best 13 wins, the women’s team made the playoffs for the first time in the its four-year history before being swept by the nationally ranked Guelph Gryphons. The second and final loss came on Feb. 21, a 2-1 defeat in overtime.

Now the team will cast their sights on next season, a campaign that will see captain Jessica Hartwick don a Rams jersey once more. She’ll play her final season without Richardson, her teammate and friend.

“I’ve grown up with Chloe throughout this program,” Hartwick said. “Knowing that she’s been accepted to these awesome programs … that’s awesome. That’s something I look up to her for, academically.”

Because of the athletic department’s philosophy of success in all aspects of an athlete’s career, women’s head coach Lisa Haley says her players will be prepared for real life when they move on.

“Winning the championship is nice and you want to make sure you win it the right way,” she said. “That’s about helping the players reach their full potential in all areas of their life. And most importantly, it’s the quality of person that you are and the level of respect you show others and the leadership you can bring.”

“Most importantly, it’s the quality of person that you are and the level of respect you show others and the leadership you can bring” — Lisa Haley

Haley says making the playoffs in Richardson’s and defenceman Kaitlyn Mullett’s final season is the best way to honour their commitment to the program.

“They’ve been here since the beginning,” she said. “Personally, it means everything to be able to give them an opportunity to go on a playoff run because they’ve put all the hard miles in.”

In its first official season in the OUA, the women’s team finished with a 1-25 record. Before last season, the team hadn’t won more than five games in a single season. Making the post-season this year was a giant leap forward.

Hartwick she says it’s this that makes it an ideal time for graduates.

“It’s a great year to leave, to be honest,” she said. “It’s hard going through those first three years, but the fact that this is the year that we’re succeeding, I’m so happy for them that they got to be here for this year.”