Those were the statements that could be heard exiting the Mattamy Athletic Centre after the Ryerson men’s hockey team lost 2-1 to the University of Toronto on Wednesday night.

“I don’t know that we could do much more,” said head coach Graham Wise “Willows just stood on his head, he was phenomenal.”

The one standing “on his head” was Brett Willows, Toronto’s goaltender and the bane of Ryerson’s existence on the rink.

The Rams fired away at him, spending most of the game in Toronto’s end of the ice and dominating the scrappy Varsity Blues squad.

In the end, only one of their 50 shots found the back of Toronto’s net, much to the dismay of the crowd and the players.

Toronto’s lead came from a total of 34 shots, with both goals off the stick of Russell Turner.

The first was visibly frustrating for goaltender Troy Passingham; the puck skipped up the stick of another player deflecting the play and jumped over Passingham’s shoulder, giving Toronto a 1-0 lead with 9:40 in the first period. 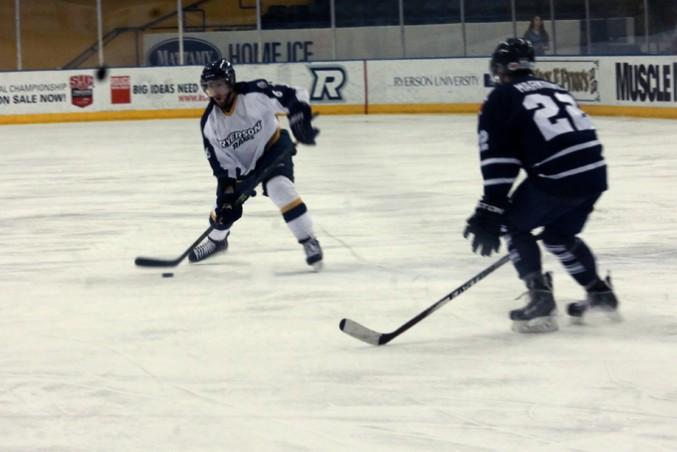 However, Turner banked his second of the game in with six minutes to go in the first to give the Blues their second, and final, lead of the game.

“I thought we played a good game, I think we out-played them actually,” said Gallant after the game, “But now we need a little more jump in our step.”

Toronto now owns a 1-0 lead in the first round of the playoffs, which forces Ryerson to cross Yonge Street to Toronto’s Varsity Arena for game two of the best of three series.

“It’s like a game seven for us now,” Gallant said, “There’s a little more urgency.”