In what will surely go down as the greatest upset so far in the 2015 men’s volleyball playoffs, the seventh-seeded Windsor Lancers defeated the second-seeded Ryerson Rams in four sets (25-27, 19-25, 25-13, 22-25) of intense quarterfinal action.

Lucas Coleman led the Rams with 17 kills, while Robert Wojcik tallied 11 digs in the loss.

The first set saw countless lead changes and evenly matched play from both teams. With the Rams leading 23-21, Windsor showed incredible resiliency by fighting back to tie the game at 24. Windsor used their momentum to fuel their comeback and ultimately took the set 27-25. After giving up the lead, the Rams seemed to immediately lose their confidence.

Ryerson looked to rebound after a tough first set, but Windsor had other ideas. After building a seven-point lead (20-13) with energetic play and their raucous fans behind them, Windsor prevented any Rams comeback, winning the second set 25-19. 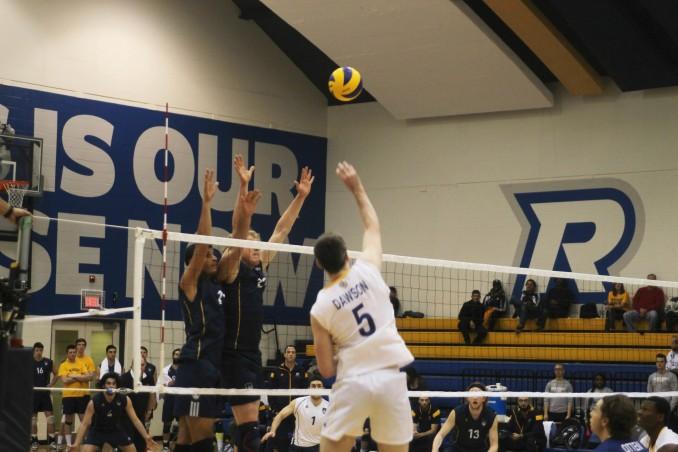 After digging themselves a two set deficit, the Rams played with desperation in the third set, winning it rather convincingly by a score of 25-13. Ryerson’s third-set victory ultimately wasn’t enough to avoid the upset as they lost their final set of the season 25-22.

“They wanted it more than us,” said head coach Mirek Porosa. “When you’re up 23-21 in the first set, you have to put it away. We didn’t and I think that was the turning point”.

Porosa credited the loss to the amount of unforced errors the team committed. “You can’t win the big games if you make errors like that,” he said. The Rams committed 15 service errors and 4 return errors for the game.

The players seemed utterly demoralized after the loss, as they sat in a circle on the Mattamy Athletic Centre hardwood. A disappointed Porosa credited Windsor for coming in poised with a good game plan. “You can’t get away from the disappointment of losing in front of your home crowd and not getting the opportunity to play in front of them next week in the final four.”

Windsor will now join Waterloo and the winner of the postponed game between Queen’s and York at the University of Toronto next weekend for the OUA final-four.