Musicians@Ryerson inspired one student to stay in school.

First-year image arts student Charlotte Fabro was considering leaving the university when she discovered the group.

“I went to one of their open mics and it was such a welcoming experience, it was something to look forward to every Wednesday,” said Fabro. “This is one of the reasons that I stayed at Ryerson.”

Musicians@Ryerson celebrated reaching 1000 members with pizza, cake, and live music Feb. 5. The group has doubled its membership since January 2014.

Fabro and Boni José were first to perform to a crowd of about 30 people with an R&B set that had the laughter and casual banter of a living room jam session. 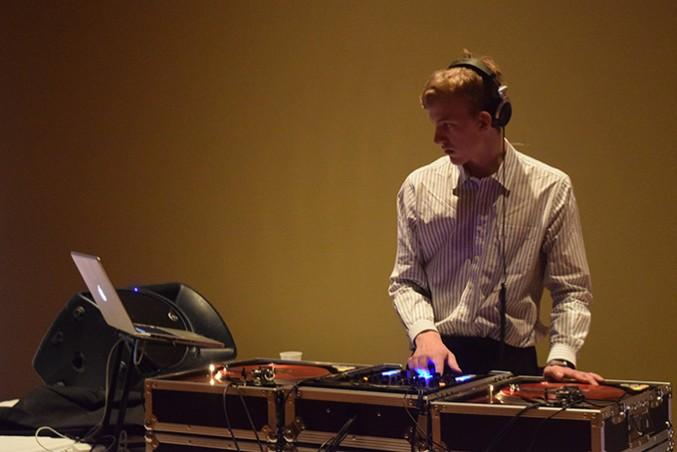 Fabro serenaded her boyfriend with a cover of Nick Jonas’ “Jealous” as an example of the “jam-o-grams” that Musicians@Ryerson sells.

Group social chair Justin Bellmore stressed the inclusivity of all levels of skill and experience within the group.

“We’re an entity that serves as an outlet for musicians who don’t have anywhere to go,” said Bellmore, also a first-year student. He added that Musicians@Ryerson was the one group that really stood out to him during orientation.

Jonathan Lord and Aarone Amino followed with a similarly soul infused set, sprinkled with laughter and crowd-engagement. The evening was capped off with some crowd-pleasing DJing by Jake Thielen, who spun EDM, hip-hop and top 40.

Musicians at Ryerson formed in 2012 when founder and Ryerson graduate Eli Vandersluis and his friends realized that the Ryerson community was lacking something.

“We thought, OK, we’re at Ryerson because we like culture but we don’t really have any way of expressing that,” said Vandersluis who returned to campus to show suppourt.

The group began as a Facebook page before being ratified by the RSU in Spring 2012.