Despite a slow start, Ryerson managed to carry a 38-32 lead at the half, battling hard against their division rivals.

“We really wanted to win and got caught up in that early rather than our process in playing,” said Ryerson head coach Carly Clarke. “It took us some time to pull away but I’m pleased with how we did that down the stretch.”

Tonight’s win is the second and final time Ryerson will face U of T in the regular season, losing the first match 74-71 last month.

“They ended our season last year and we lost to them four times in a row before this [victory],” said Rams guard Keneca Pingue-Giles. “And all by three points, so to get tonight’s win by 18 feels really good.”

The game was close through three quarters, but Ryerson drained three baskets beyond the arc to pull ahead in the game’s final moments. Outscoring the opposition 31-15 in the final frame, the Rams handed the Blues a third loss over their last four contests.

“In the second half we really picked it up,” said Pingue-Giles. “We were able to score points, got tons of rebounds and it was a full on team effort.”

But beyond a hard team effort, Pingue-Gilles made key steals of her own late in the game to help secure the victory. “I always try to get in the lanes as much as I can on defense” she said. Pingue-Gilles led Ryerson with 20 points and four steals in the victory. 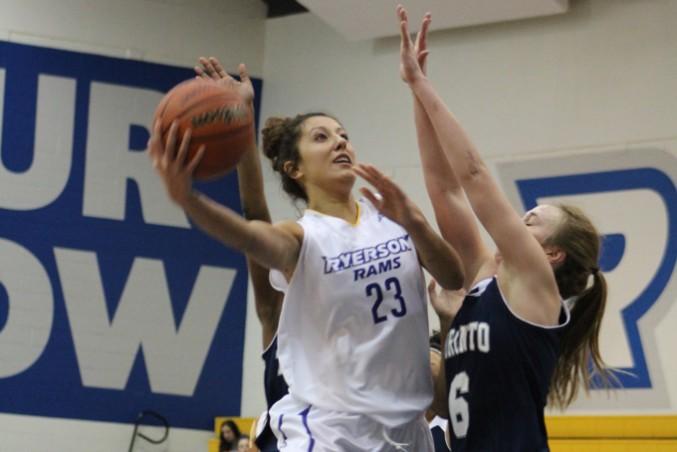 Despite shooting a poor 39 per cent from the floor, Ryerson fought for possession through 40 minutes and posted 63 rebounds by games end. Rams forward Annie Sokoloff registered a new career high 17 boards.

“I knew I could body them in the hot spot and some of the rebounds just came to me,” she said. “I think getting UofT frustrated was important and we ended up with the win.”

Though for the Rams another victory came beyond the scoreboard: forward Mariah Nunes returned to action since sustaining a minor concussion last week. “It’s been good to return, but I need to get back in shape and regain my mental composure,” she said.

Nunes registered nine points and despite missing some easy layups, is credited with a solid return to the court. “You could see she was a little bit rusty for sure, but she had a couple deflections and steals so it’s certainly nice to have her back in the lineup,” said Clarke.

The Rams are back in action on Friday Feb. 20 when they host the Queens Gaels at 6 p.m. in their final regular season game.