Ryerson was led by graduating all-star Keneca Pingue-Giles, who had 18 points. Mariah Nunes added 15 points of her own.

The game started off close with both teams trading three’s and neither team being able to pull away. Ryerson kept a lead most of the time though, but by no more than four points. The first half ended with the score 38-35 Rams.

“It’s always a battle with Queen’s,” Ryerson coach Carly Clarke said. “We had some defensive breakdowns in both halves and I thought they capitalized on more of them in the first half.”

The third quarter is where Ryerson really opened the game, outscoring Queen’s 21-11 and grabbing a big 59-46 lead. Queen’s outscored the Rams 16-13 in the fourth including a 9-2 run to start the quarter, but Ryerson had the cushion and were able to easily hold on to win.

“We found a collective effort defensively, we were able to get some stops,” Clarke said on the second half. “We also executed a little more cleanly offensively and we got to where we expected to be on the floor.”

“I think we were a little up tight at the beginning but in the second half we just took a breath,” added graduating forward Annie Sokoloff.

The final game of the season was also seniors night for the Rams, with the team honouring Sokoloff, Pingue-Giles and injured guard Lindsay Harris. 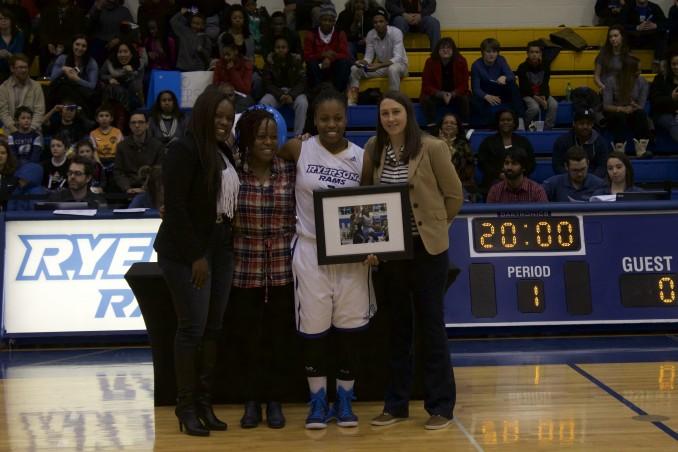 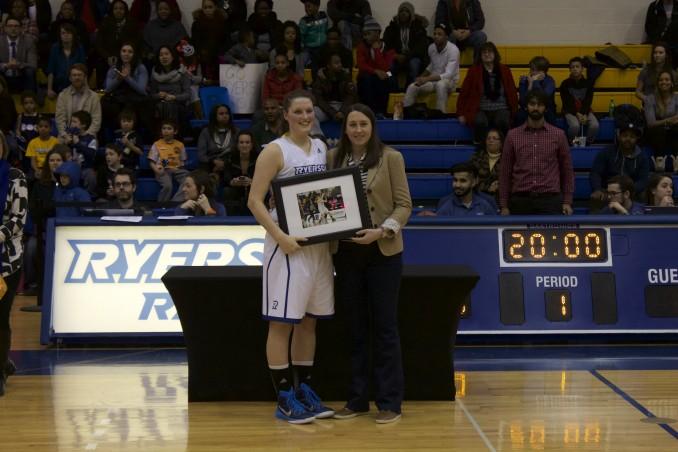 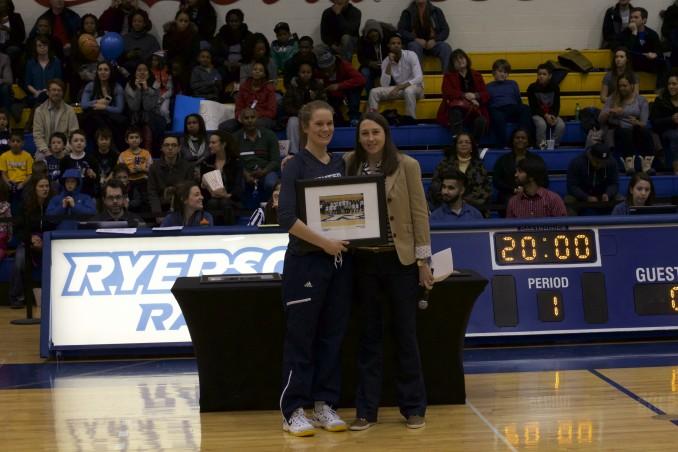 Pingue-Giles is eligible to return to the Rams next season if she stays at Ryerson for grad school. But if not, she closes out her career with 783 points, which ranks her seventh all-time in program history. Her 330 rebounds rank 11th and 117 assists rank fifth.

Sokoloff leaves her five-years at Ryerson fourth all-time in rebounds with 398, averaging 4.8 rebounds per game for her career

“Personally, I’ve had the upmost perfect career,” Sokoloff said. “I started at Ryerson when we were still in Kerr Hall and we weren’t winning a lot of games. It was rough.”

“But then we got this new building and Carly came on. Now we’re setting records, so I wouldn’t trade it for the world.”

With the win, Ryerson all but clinches third place in the Ontario University Athletics (OUA) standings, which means they get a bye in the first round of the playoffs. That also means the Rams don’t know who they will be playing next, but they do know whoever it is will be coming to Ryerson on Feb. 28 for the game.

“The fewer games you have to play to win is always to your advantage,” Clarke said. “We’ll be looking forward to what we have to prepare for but will be focusing on what we’ve been doing the whole time.”