The Ryerson women’s basketball team made history Friday night by clinching its first ever spot in the Canadian Interuniversity Sport (CIS) national championships.

The Rams beat the Queen’s Gaels 69-60 in the Ontario University Athletics (OUA) final four semi-finals and will now face the University of Windsor Lancers for the provincial championship, before heading to Quebec City to compete in nationals later in the week.

The game saw the two teams compete in a back and forth affair that came down to the final seconds. Rookie sensation Sofia Paksa led the Rams with 18 points to help secure the victory.

“It’s pretty exciting but I don’t think it’s really set in yet to be honest,” said head coach Carly Clarke. “It was a tough battle, and I’m still wound up about that.”

There was no grace period during Friday night’s game. With knowledge of each other’s play styles, the competition got off to a fast start, with both teams jockeying for position and trading quick shots right from the get-go. As a 6’4 forward, Paska asserted her self-early, nabbing six rebounds to go with her 18 points and playing 24 minutes off the bench. By the end of the first quarter the Rams led by only three, 14-11.

The second quarter saw both teams virtually go shot-for-shot, trading points and attempting to establish a rhythm that would carry out for the rest of the game. Gaels winger Jenny Wright scored seven of her 18 points on the night to help bring the Gaels to within seven, but at the end of the half Queen’s trailed the Rams 35-27. 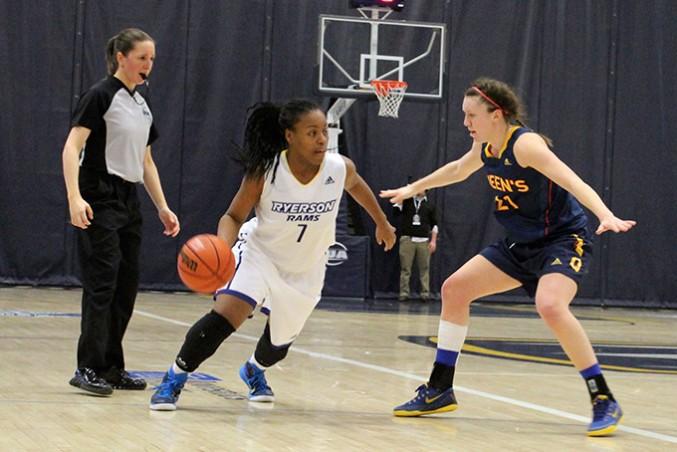 “This is what you work for every season,” fifth-year forward Annie Sokoloff said. “It’s taken five years for me but we’re finally here, so it’s a dream come true.” Depth off the bench has been a huge factor and advantage for the Rams this season, and with 37 points off the bench, tonight was no different. By the end of the third quarter the Rams had found their rhythm. Going on a 10-0 run, the Rams began to edge away from the Gaels, and using their depth and experience, showed why they’ve been the team to beat all season.

The Gaels weren’t going down without a fight though, and the fourth quarter saw them pull with six points of the Rams, in a valiant attempt to keep their season alive and try to make it to nationals for the second year in a row. In the end, the Rams kept their cool and stuck to their game plan.

“It means the world, we really have come a very very very long way and this season has just been so remarkable and we’re all ecstatic about making it to nationals,” said guard Keneca Pingue-Giles. “Who would have thought this team would have the opportunity to win the OUA championship and play in Quebec. We’re going to take this excitement and bring it to the court tomorrow.”

Anchored by the leadership of Pingue-Giles, the Rams will continue their sensational record-breaking season, when they face the Lancers in Windsor on March 7. Windsor has won the last four national championships and is still a powerhouse in the OUA. But when they came to Ryerson in November, the Lancers only won by a score of 77-74.

The first game of the national championships against will be March 12 in Quebec City against a yet-to-be determined opponent.
“It’s certainly going to be tough, Windsor’s proven themselves as the best team for a long time,” said Clarke. “We got nothing to lose, so we got to come out here and play and be ourselves. If we hang around long enough I think we have a real chance.”
When Clarke returned to her hotel room after the game, she found a birthday surprise from her team.

Thanks to my team for the bday surprises and gifts. Now what the heck do I do with all of these balloons!? pic.twitter.com/W4NtfXprCe