Arlene Throness is standing in a sea of kale. “Eat whatever you want,” she says. We part the seas and dive into the food around our ankles, floating to the rows of baby greens.

“I recommend making a salad,” Throness says; she is energetic and sharp. She picks a little bouquet for each of us — mustardy tat soi, fun jen and mizuna — I devour the spicy red and green mixture. We finish off with edible purple borage flowers, planted in an empty patch to attract bees for pollination. Twenty feet below us, an engineering student bites into a bland sandwich, probably.

Throness, a handful of volunteers and I are on a farm. On a roof. It’s as though a giant hand plucked a small-scale farm from rural Ontario and accidentally dropped it on top of the George Vari Engineering and Computing Centre. Here in the epicentre of the largest city in Canada is the Rye’s HomeGrown (RHG) 10,000 square-foot market farm. Throness is the urban agriculture coordinator — she is the brains and the backbone of the operation, in charge of both planning and programming. “And also everything,” she says. 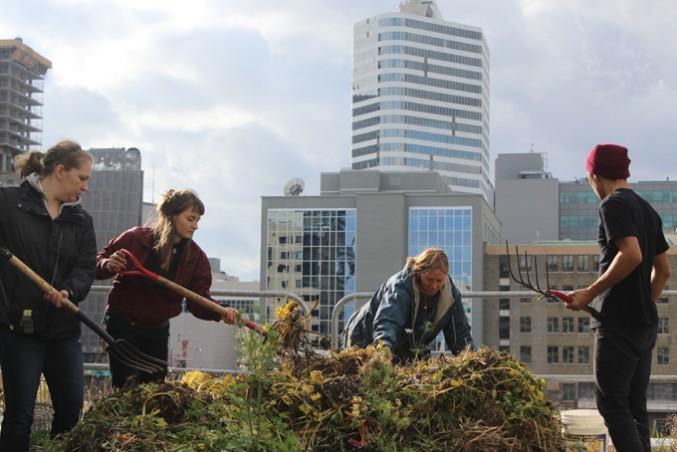 The significance of a farm on a roof is hard to comprehend until you’re up there, witnessing rows of plants growing in real time before a backdrop of skyscrapers and bustling city streets. The garden is meticulously planned with tidy rows of vegetables and “human-size” straw walkways to sit or kneel in while harvesting. Vegetable families like brassicas- (radish, broccoli), nightshade (tomato, potato) and legumes (beans, peas) are grouped together in different sections of the roof, alongside companion plants like basil and cilantro that ward off pests. Throness refuses to use pesticides or synthetic sprays, opting for organic methods like composting plant waste for fertilizer and hand-picking weeds. 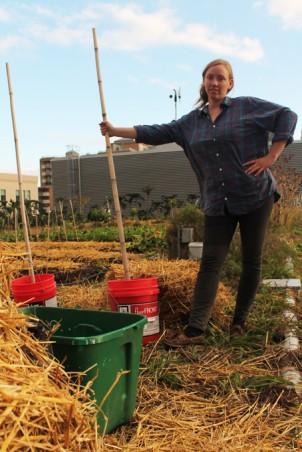 This quarter-acre patch of land — established just last year — yielded 8,000 pounds of food in the 2015 growing season and 5,000 pounds in 2014. With rising food insecurity in cities, the urban farm is a welcome addition to campus.

The 2015 Daily Bread Food Bank annual hunger report revealed the increasing number of Torontonians turning to food banks. Since the recession hit in 2008, total client visits have increased by 12 per cent, food bank use increased 45 per cent in Toronto’s inner suburbs (Etobicoke, North York and Scarborough), and the average length of time visiting a food bank has doubled from one year to two years.

Throness says having the knowledge and infrastructure to grow food in a city makes us a more resilient and healthy society. The ultimate goal of RHG is to become an all-encompassing resource for people who want to learn about and practice urban agriculture. “I think urban agriculture is really trendy right now and that’s exciting because if we make it part of our mainstream culture again it’s only going to have a positive impact on our society,” Throness says.

With the success of this agricultural experiment, it’s clear that the rooftop farm has already made an impact, proving the possibilities of farming in the big city.

RHG began as a student group in 2011 with the goal of growing food, starting with a small garden on Gould Street and expanding to spaces in the Quad, planters at Pitman Hall and a greenhouse in the architecture building used to grow microgreens through the winter.

In 2013, Garth Poppleton of custodial services pointed out that the Andrew and Valerie Pringle Environmental Green Roof on top of the engineering building might be a possible space for growing.

“[Garth] was the one who invited us to come to the roof and gave us the keys and put trust in the project,” Throness says. “So that’s a huge part, is just to have the university be willing to say yes.”

The green roof was built in 2004 as part of the original infrastructure of the building to catch stormwater runoff and reduce heat absorption in the summer. Over 10 years, seeds had blown onto the roof. Daylilies and weeds sprouted and thrived — a sign of fertility.

Throness — who has a degree in permaculture, a bachelor of political science and human geography from Concordia University, and years of farm experience all over the country — was hired by Ryerson as the urban agricultural coordinator of the project. She was immediately intrigued, knowing that urban agriculture isn’t normally recognized as a legitimate profession.

“Finding the roof I was like, ‘OK, this is exciting, this is an opportunity.’ And then of course the first year was exhausting, like trying to convert the whole roof and balance the books and make sure that it all happened,” she says.

With the financial support of the university, they spent several months at the beginning of the 2014 growing season transforming the roof to a farm: sheet mulching, adding two inches of topsoil — which they will do each year — digging rows and planting seeds.

Their budget of $70,000 was supplemented by the university as well as revenue from the market and food services. Around half of the harvest is sold at the Wednesday farmer’s market on Gould Street. The rest is divided between campus services and weekly veggie boxes for volunteers who sign up for the community-supported agriculture (CSA) program. CSA is a financial model traditionally used by small-scale farmers to share the risk and reward of their harvest with consumers. In RHG’s case, each of the 20 working members puts in three hours per week at the farm and takes home a basket of food for $5. 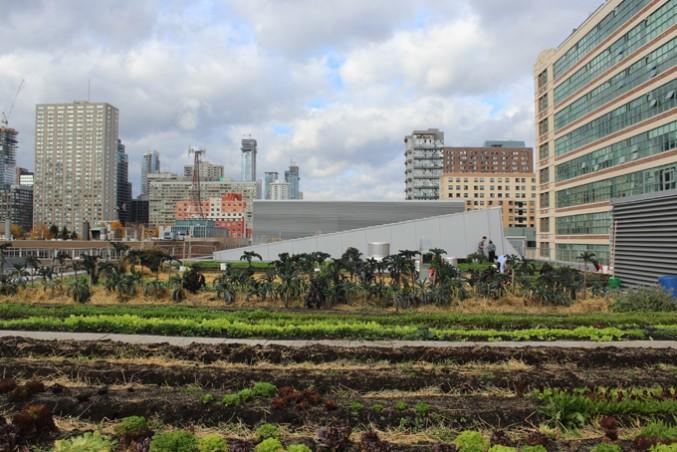 “It’s fun to mimic a farm — our whole thing is that we want to be just like a small-scale farm so that’s why we have a five-year crop rotation and a CSA and we’re going to market and doing all this stuff because I think it’s exciting for people to be able to engage with that farm culture right in the city,” Throness says.

Farming is risky business. Throness says because urban agriculture is a new field born out of the nonprofit sector, most people working in it struggle to make a living wage.

“You have to love the lifestyle because you’re not going to make a lot of money and you’re going to work really hard. It’s really hard work,” she says. That’s why CSA is essential to keeping the farm in operation.

“It can be really stressful not knowing if you have a job the next year,” she says. “Hopefully when [volunteers] put Rye’s HomeGrown on their resume it will have weight or resonance in them getting jobs and helping build similar projects in other places.”

Throness says she has been involved in far too many farming projects with people who had no idea what they were doing — that’s why she got her agricultural degree. But when you’re around someone like Throness it’s not hard to learn. “That’s a really fun thing about farming, that you can really learn by doing and seeing and observing and chatting while you’re working … you don’t even know you’re learning.”

On the roof, Spencer Quinn helps us turn huge compost piles, throwing earth with wriggling worms on the mound of decaying plants as we shovel it with pitchforks. He is kind and quiet, offering the odd suggestion and answering our questions. He sympathizes when dust blows in our eyes and mouths, kicked up by the high winds on the roof, like it’s happened to him hundreds of times.

Quinn was the gardening coordinator intern for RHG for the 2015 season after volunteering consistently last year. He helped out with volunteer sessions in the on-ground gardens and monthly First Friday events like this one, worked the market stand on Wednesdays and knows the inner workings of the rooftop farm.

“I like being outdoors and there’s just something about growing food that intrigues me,” Quinn says. “I also like how it sort of connects people to the food that they’re eating whereas maybe there’s some sort of disconnect if you’re just going to the grocery store and buying your food.”

Quinn, who received his certificate in food security at Ryerson two years ago, has his own 250 square-foot garden at his house where he grows vegetables. His favourite thing to grow is potatoes because it’s always a surprise digging them up.

He says the key to helping people grow food in cities is space — community gardens and institutional programs like RHG help with this. Quinn is one of the four interns, the other three with positions in communications, outreach and programming. Quinn isn’t sure if he will return to the roof next year. He hopes to have a market farm of his own in the future.

Among the thick stalks of kale, the 20-foot bean fence and leaves glowing emerald in the sunlight, we dive into a mini feast of baba ganoush, kale pesto, celery sticks and sliced daikon radish, all from the garden and prepared by Throness. It’s early November now, the end of the growing season, and most of the crops have been harvested. In the empty beds, the team has planted cover crops — winter rye and clover — which protect the soil and pull in nitrogen over the winter. The team will finish harvesting within the next few weeks. In February, they will begin work in the greenhouse, planting seeds.

As the sun goes down over the city the team munches silently, tired after several hours of work. For Throness, eating is the best part.

“I think what’s kept me going over the years is that the reward of growing food is eating it, and sometimes that’s all the reward you need in life,” she says. “It’s so satisfying — immediate gratification. That’s what food is.”