They found an arm in the garbage can with it. People saw bones in there. It was the size of a small child’s heart.

These were all of the inaccurate details Joel Andrew Clifton, a second-year photography student, read about the pig’s heart he had left in the Ryerson garbage can — the same heart (and two brains, and another heart) that caused the panic on campus on Nov. 18. Unaware of the hubbub and at work, Clifton had no idea his art project was being covered by almost all media and had inspired a police investigation.

“One of my friends from school called me because she knew I was doing the project and said, ‘Is that your heart they found?’ and I said ‘What are you talking about?’” Clifton says. “Then I went on the internet and saw that it had kind of like blown up in the media.

“I felt terrible that Chang got disrupted, the police had to come down and waste their time, people on campus were freaking out,” he says.

It began when two of Clifton’s friends bought a chest that housed a bunch of old letters and photographs of a stranger’s romantic adventures in 1950s Europe.

“[My friend] selected 15 couples that she knows to create a piece of art for each letter to sort of express what each letter expresses,” he explains. The photos are destined to be displayed at an arts exhibition this weekend. “My girlfriend and I made [the photo] as a metaphor. When you fall in love it’s a balance of your heart and your mind. You feel tugging from every direction. That’s what we were aiming to do.”

“One of my friends from school called me because she knew I was doing the project and said, ‘Is that your heart they found?’”

So they bought some organs at a Chinatown grocery store at the corner of Dundas and Spadina, and did the photoshoot on Monday night. When they were done, they wrapped the organs in plastic, wrapped that in construction paper, taped it, wrapped it in a garbage bag and threw it out.

They never meant to incite a campus-wide panic attack that saw parts of Victoria Street — in front of the Chang School — roped off with yellow caution tapes, while the police waited for a coroner.

At 8:45 a.m. on Wednesday, the police got a call about bodily organs that had been chucked into the trash in front of the Chang building. A groundskeeper had been changing the garbage when they spotted it, panicked (obviously), called the police (obviously) and left it untouched on the pavement while the cops checked that it wasn’t a human heart (obviously).

Some cops suggested the heart was too big to be human — Ryerson tweeted that it was probably a cow’s. By the time Clifton found out, the coroner still hadn’t given an answer.

“I called the police right away and I called campus security, sorted it out,” Clifton says. “Then I finished my work day and went down to the police station and gave my statement.”

The cops had a great sense of humour about the situation, apparently.

“The shoot went really well, I’m really happy with it,” he says. Clifton considered asking his professor for an extension on the still-life photography assignment he planned on using it for, and shooting something else. He handed it in anyway.

“Shooting these kinds of things isn’t like unusual for here,” Clifton says. “I’ve seen people bring in lots of dead animals and stuff.”

The photos will be on display on Nov. 20, at the Black Cat Gallery at 2186 Dundas Street West. 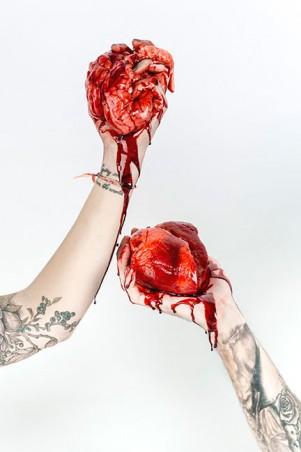