Ryerson’s campus radio station, CJRU 1280AM, known around campus as The Scope, officially launched onto the AM dial on March 31.

As part of their debut, the day was filled with festivities in downtown Toronto, both on and off campus, including an open house in the Student Campus Centre (SCC) which in celebration of its 11th anniversary, along with a build-your-own radio workshop, a flashy musical bike, a drum workshop, live music performances and much more.

“I felt like all 99 watts of power this morning,” said CJRU 1280AM Manager, Jacky Harrison. “It’s wonderful.”

The show was officially on-air at 6 a.m. with the first voice being second-year journalism student, Bryce Turner and ran throughout the day until midnight. 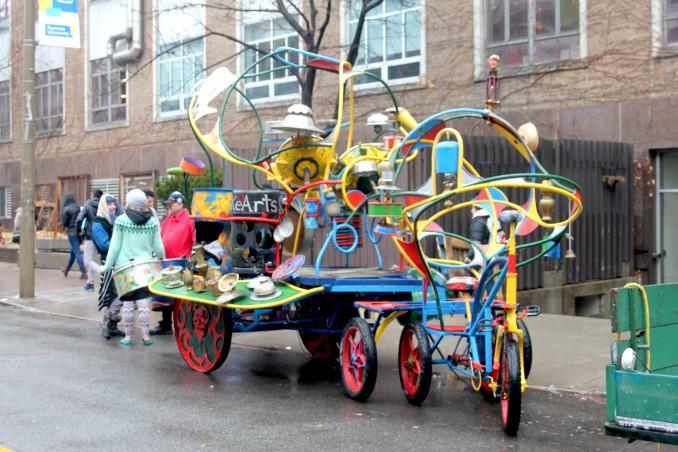 The headlining event of the launch was a concert with The Airplane Boys, Cheap Flights, Ashton Beaudry and other artists at the Smiling Buddha on College street in the evening. There were also performances from local musicians throughout the day in the SCC as part of the anniversary open house which featured Charlotte Fabro, Milan Boronell and Adam Kurgatnikov.

Aiming to expand their campus station, CJRU applied for an AM license in 2013 and received it in 2014. The rest of that year was spent doing technical work and programming to build up the volunteer base.

“It can be a lengthy process, you have to wait for a frequency to be available, a place to put the tower, these are all things that take time,” said Harrison.

Along with their AM station, CJRU 1280AM also introduced their collaborative app enRUe, which allows hundreds of citizen journalists to upload audio and edit on one file.

“It’s basically like google docs, but audio,” said  Harrison. “We tested it last month at PodCamp, and if anybody wants to be part of the testing group, they should get in touch with us and email us because we’re continuing the test all spring.”

The project was supported by the Community Radio Fund of Canada.

CJRU 1280AM also has several community partnerships. They are working with CultureLink, a local settlement agency, where they plan to produce radio programming that trains and empowers new immigrants and refugees in Canada. Additionally, they have partnered with LIFE institute, which provides high quality education for older adults. They will be working on a seniors radio club at the station.

“We love partnerships because we have a campus and community license,” said Harrison. “Our staff is made up of 50 per cent students and 50 per cent non-profits or volunteers.”

Emily Joveski, a Ryerson journalism alumnus, is the News Director of CJRU and has been a part of the station since 2013.

“When we first started, we were in a little room in [the] SCC,” said Emily Joveski, CJRU 1280AM News Director. “It’s crazy to see how far we’ve come, it has been a long time coming.”

Currently, Joveski is working on starting up a feminist radio collective considering that CJRU 1280AM focuses on having more diverse voices on-air.

“Part of the collective is that we’re doing a show,” said Joveski. “We want to have more voices of women, especially women of colour, non-gender binary people, trans people.”

Being a campus and community radio station, they heavily rely on volunteers to take on roles at the studio. The staff at CJRU 1280AM aims to build contributors from the ground up by mentoring them and giving them the opportunity to try new things.

Zach Abraham is an Accounting and Finance student who has been volunteering at the station. “The best way to put it is, at The Scope, I don’t think there’s anyone who’s too good for a task,” said Abraham. “As a volunteer and an intern, this has been a very unique opportunity because not only am I working for the school, I became part of a community.”

Abraham will be hosting his own show, which will focus on entrepreneurship topics such as teaching students how to save money and financial literacy. Little hacks such as where to get free food and cheap transportation options will be some of the topics covered on the show.

“This is an opportunity that all students and community members have available to them, you don’t have to be a journalism student or an RTA student,” said Joveski. “You can be a nursing student or a business student, everyone has a voice and an opinion.”