Tim Commandeur poses with his $500 winnings.

All photos by Funké Joseph

The room was filled with tension, high stakes, and arcade sticks at Ryerson’s first Mortal Kombat tournament this past Sunday.

“The pressure is real. You have your opponent beside you, and a crowd watching your every move. You don’t have the same comfortability as if you were in your house,” says Pierre St. Rose, founder of Canadian Gaming Tournaments.

St. Rose is collaborating with Daniel Silva, the vice president of Gaming and Multiplayer E-sports of Ryerson (GAMER) club, to organize this event. He runs tournaments like these because he finds that online gaming has detached a lot of people from the nerves that arise when people compete. He wants to replicate those situations in the classic face-to-face gaming environment Mortal Kombat is known to have.

The first Mortal Kombat game was released in 1992. It was one of the first fighting games, and was an instant hit, selling over 35 million copies. Since then, it’s become an arcade classic and a favourite of many fighting game fans.

The players competing at Ryerson’s tournament are playing Mortal Kombat X. It’s the tenth game in the long running franchise, and it’s introduced the series to a new generation of gamers. 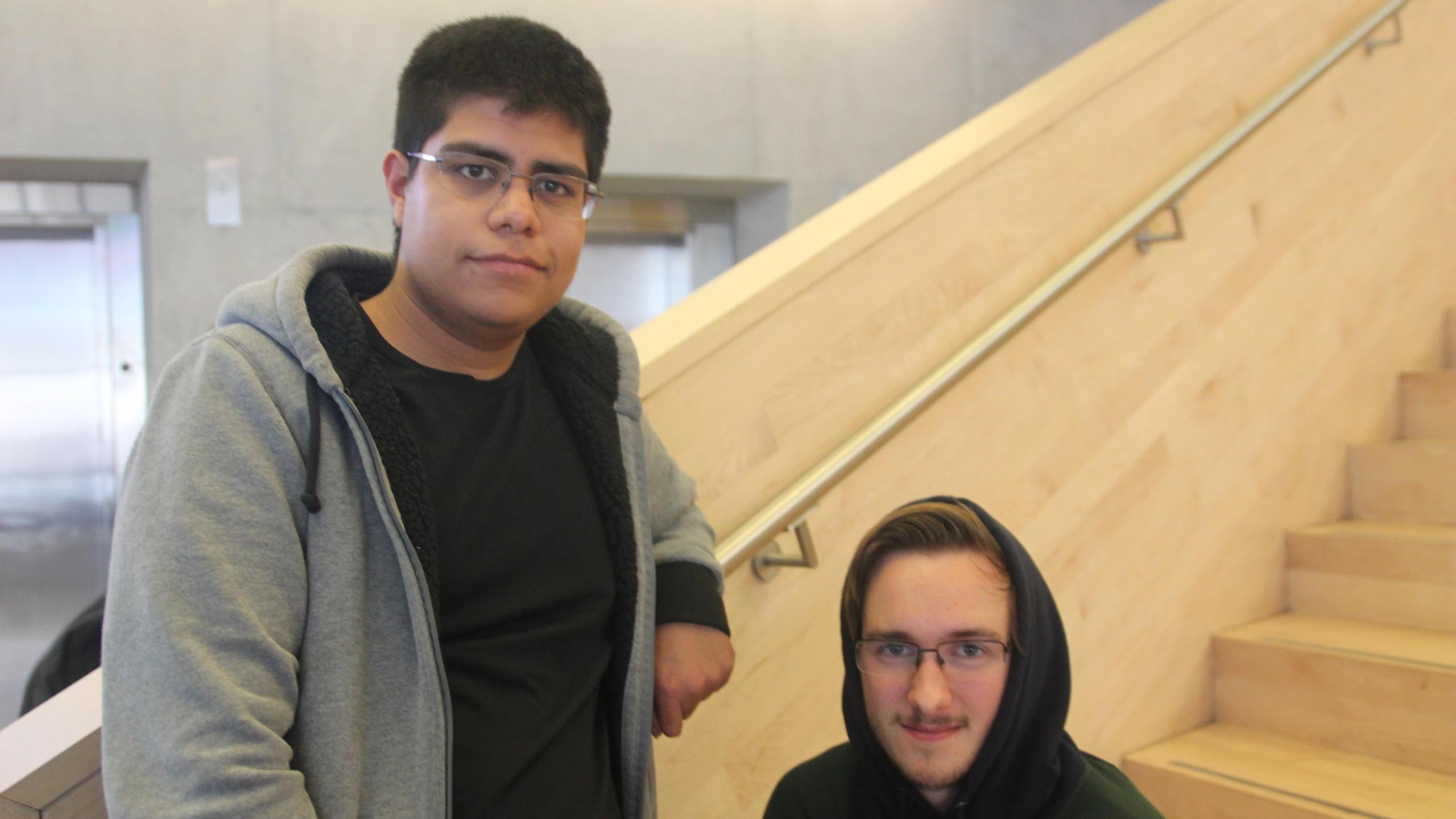 Among that new generation are William Argueta and Chris Albanese, two high school students from Brampton who entered the tournament because of their love for the game’s distinct style.

“I play practically everything. Not as much as I play Mortal Kombat, though,” says Argueta while he was waiting for the tournament to get started. “Mortal Kombat kind of changed the genre, and made it more intense. It’s much more aggressive, which is how I like to play games.”

Argueta and Albanese can’t wait for the first match to start. They’ve been training hard ever since the most recent update for Mortal Kombat X released. It changed a lot of the in-game mechanics and patched in lots of new content. The change to the game was so radical that they even decided to pick up new characters.

Mortal Kombat X has a roster of 33 eccentric fighters, ranging from aliens to movie stars. Right now, Argueta plays Sub-Zero, a ninja with a collection of ice powers. Albanese plays Kano, a deadly mercenary who specializes in throwing daggers and shooting lasers.

Everyone is itching for a battle and when a tournament volunteer grabs the mic, it’s go time. The 16 players that entered can now officially start the battle for the $500 prize pool. 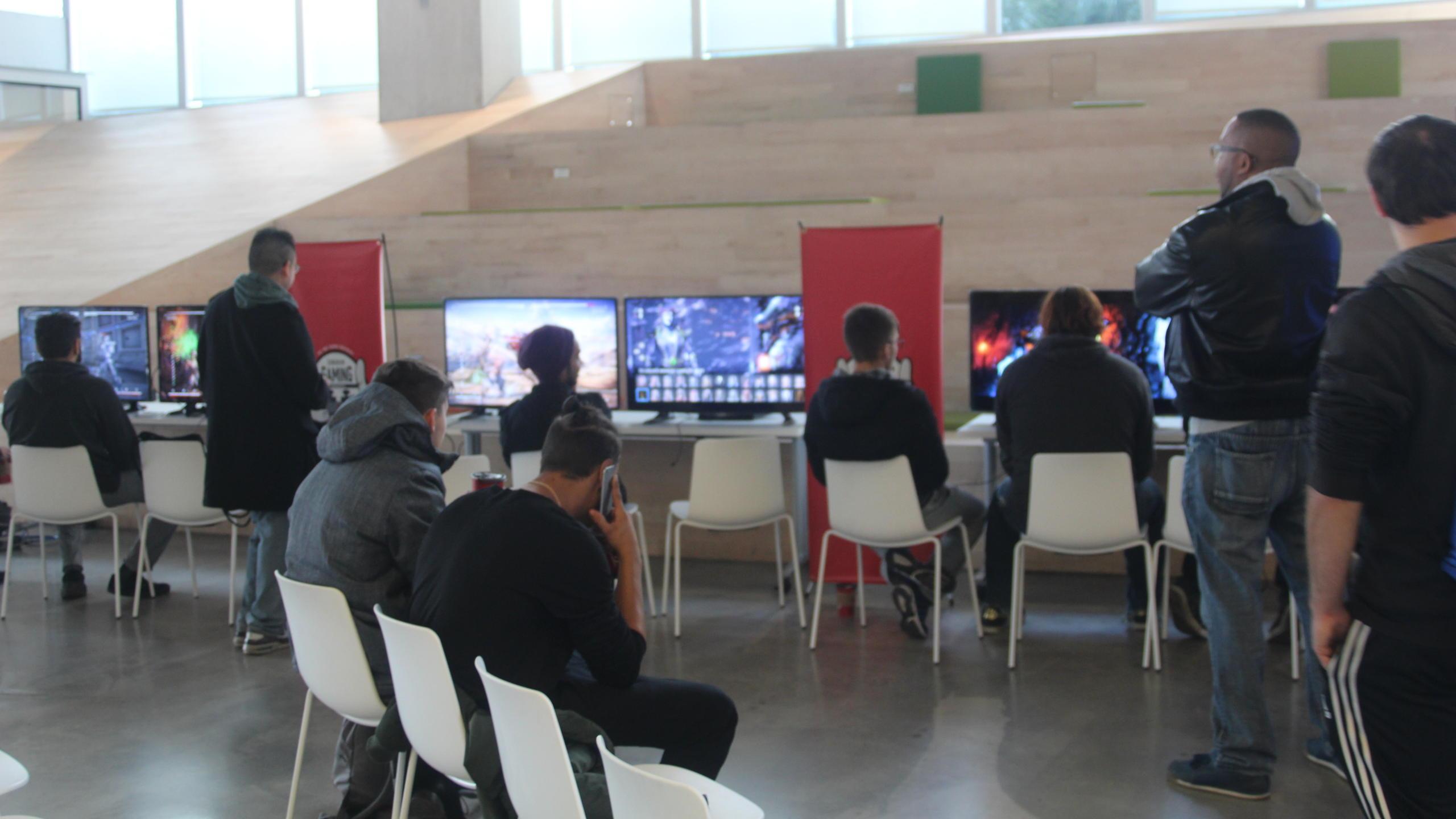 The tournament took place in the amphitheatre of the Student Learning Centre.

But the excitement comes to a halt when players pick up the controllers and realize that the PlayStation 4 consoles aren’t up to date. This means that everything players like Argueta and Albanese have learned in the last month goes down the drain.

“It’s not the most recent patch, so everything we learned is kind of useless,” says William. He says he’s a bit frustrated with the patch issue, but he says he’ll still have fun.

Argueta starts his first round against a player who loves to use Takeda Takahashi, and it’s just not going well. Every move Argueta throws out seems clunky and predictable. His opponent seems to have clear control over the match, and soon seizes the victory.

After his match, Argueta says the update might have helped his chances in the fight.

“Of course, I just keep forgetting the patch we’re playing on is different,” he says. “It is frustrating getting your ass handed to you, but whatever it’s fun and games.”

This was a common case in most of the matches. Characters that players had spent so much time practicing with over the last month fell short because the PlayStation consoles were out of date. It was an issue for a majority of players, and some just couldn’t recover from it.

A few sponsored Mortal Kombat X players including Tim Commandeur, who is better known through his tag “cR HoneyBee” came to the tournament. The patch didn’t affect them directly because of their character pools, but they still urged St. Rose and Silva to address the issue.

“A lot of these players have been pouring hours into this game over the past month, and not having the latest patch messes a lot of things up. The frame data, viable characters, and available characters are just a few things that patch has changed,” says Commandeur.

St. Rose and Silva welcome these complaints and learning what problems they have to solve. They say that since it’s the first tournament in this setting, it’s a growing experience.

“It’s all part of the learning process,” says Silva. “They’re just things that happen, and in a sense they’re good because you’ll learn a lot from these things. But in the moment it’s gonna be heated, and you have to figure it out quickly.”

Regardless of the technical difficulties, players were still giving it their all. Both Argueta and Albanese are eventually eliminated, but they stay anyways and join in the crowd’s excitement.

“I don’t really go to tournaments, but it’s definitely a different experience. Like I could play some of these people online, but it wouldn’t be the same,” says Albanese. “It allows you to try things out and learn what works best, all while you’re fighting new people.”

The brackets were skimmed down and it came down to the final four. In one of the semi-final matches, Commandeur faces off against the player that eliminated Argueta. 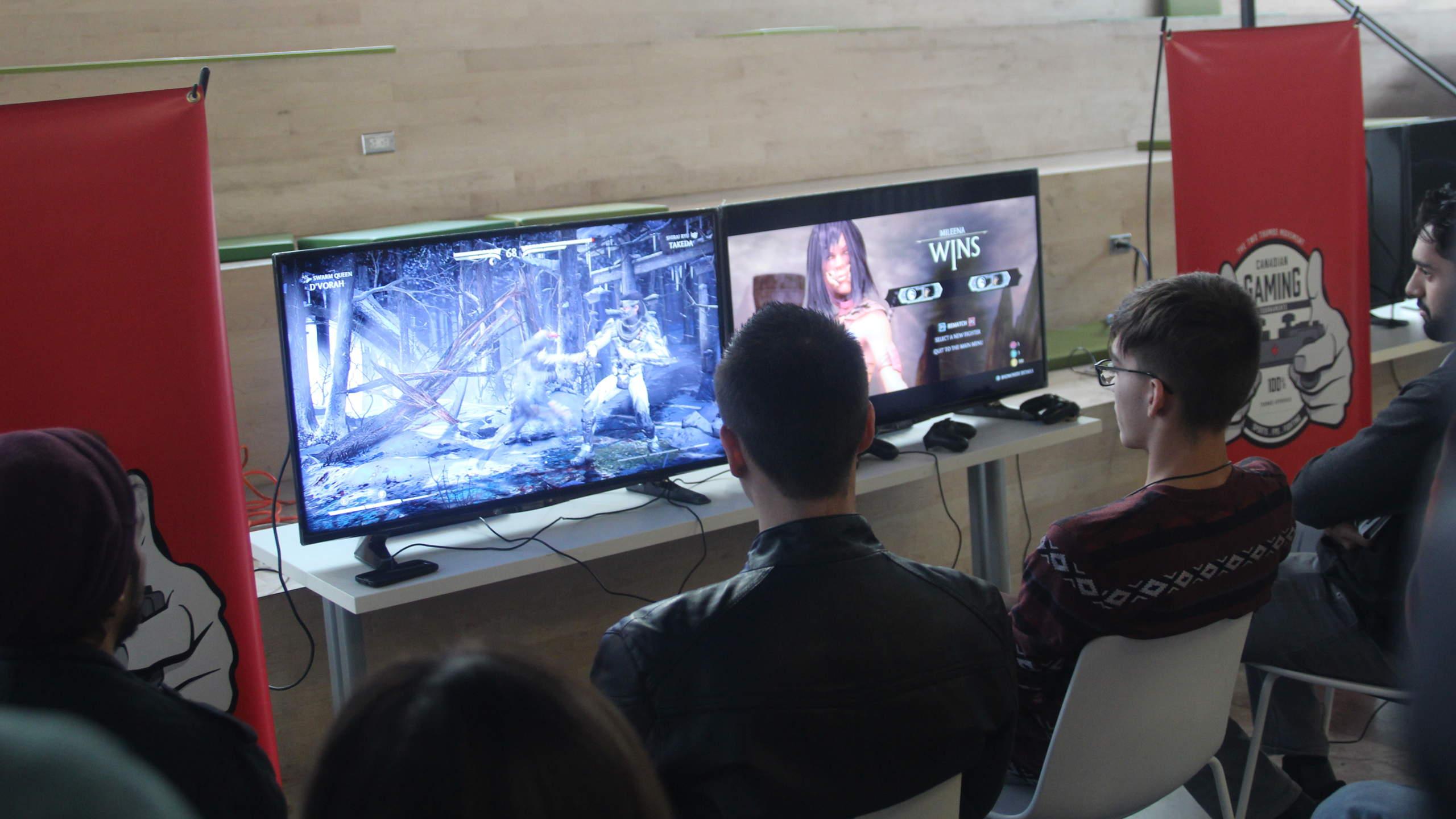 It’s a an exciting battle for those watching. Both players have won clean 5-0 victories up until this point, and everyone wants to see who would make it to the finals. Tim pulled out D’Vorah (who is probably an inspiration for his tag because she’s basically a giant bug lady), and his opponent sticks with his good ol’ Takeda, they pressed start and it began.

“Oh Tim. Tim is definitely gonna win this,” says Albanese. “[The other guy] is good but Tim is on another level, man.”

He’s right. Commandeur wins. He knows how to do things a lot of his other opponents just don’t comprehend.

Albanese explains that one of Commandeur’s tactics is called “footsies.” It’s a technique used in fighting games like Mortal Kombat and Street Fighter where players move back and forth slightly, attempting to bait out one of their opponent’s moves so that they can capitalize on that mistake and land a counter-attack. Doing so requires a strong knowledge of every character’s moves and a quick reaction time.

Commandeur gets to the finals with ease, and it seems like he’s only started trying in the last couple of rounds. The same is true for the other player in the finals, Saqib “Sacky” Mirza. They’ve fought each other in tournaments before, and each time it’s a different winner.

There are some laughs and groans in the crowd when Commandeur picks Kuatan Jungle as the arena for the match. Someone even yells out, “What a cheese pick!”

Commandeur wins the first match, using the map to his advantage. It’s a 50/50 chance that the stage will be Commandeur’s pick for Kuatan Jungle, or Mirza’s pick for a safer stage, but it keeps landing on Kuatan Jungle.

Sacky’s Quan Chi casts a spell on the ground as his last saving grace, but D’Vorah flies over it and stings him for the victory. Commandeur wins the tournament and receives the $500 prize pool on a big cheque.

“It was a fun time. These guys put on a great tournament, the only thing they need to work on is staying up to date with the most recent patches,” says Commandeur. “I’ll be back for the next one.”

This is the first of four tournaments that Ryerson GAMER and Canadian Gaming Tournaments will be running. The other three include Street Fighter, Call of Duty, and FIFA.