Paradise Comics tells the story of a broken family in which the father has left the home while his thirteen-year-old daughter is left to deal with the loss, through theatre. In remembrance of her father, all the girl has left is her father’s comic book shop named “Paradise Comics” (not to be confused with the comic book shop on Yonge Street) which is filled with collections of comic books which once brought them together. The play is produced by the Toronto production company  Filament Incubator,  as part of their “8 Plays in 8 Months” initiative.

Making Paradise Comics come to life was a very long process for the playwright and Ryerson alumni, Caitie Graham.

“I started writing this play in 2012 at Tarragon Theatre’s Young Playwright’s Unit. This is the first play I had ever written. The readings of the play started in 2013 and from there has been a lot of remounting,” said Graham. “I first showcased this play at Ryerson’s New Voices Festival which is a showcase at the end of your four years at Ryerson’s performance acting program.” 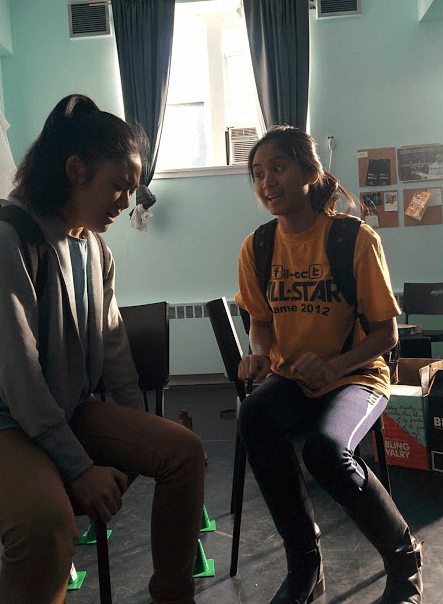 “After losing the person that kept them together, the mother and daughter have to cope with the mechanisms that go with one another,” said Graham. “Beans, is thirteen-years-old and she is dealing with this huge loss in her life while she is growing up. And this incident shapes who she is as a person and what she cares about.”

According to Graham, the play revolves around how one moves on with life, following some sort of loss of paradise. It answers the question of how to maintain relationships with people you love.

Graham also explained that the play is not “all that sad”. Beans has a friend named Hannah who tries very hard to make her best friend feel better. In her pre-pubescent way, Hannah tries to make Beans feel better through introducing her to the world of boys and crushes. This aspect of the show brings a humorous light to a story of loss and grief, according to Graham. After all, the girls are still growing up, explained Graham with a chuckle.

The venue is set in a “versatile and intimate” setting in the basement of Kensington Market, explained Graham.

Darwin Lyons, the director of the play explained that this is “not a traditional theatre venue”.

“It is more like found space,” says Lyons. “We had to embrace what is there and really embrace the architecture of the venue as the basement is gloomy. It is not like when you walk into a traditional theatre when the curtains go up. It is on open ground in setting.”

Graham further explained that is it very exciting to be one of the very first production teams to use the “brand new space”.

“It provides for a very intimate experience with the audience,” said Graham. “The venue can fit up to thirty-eight people. And being in the basement of Kensington Market, it really makes you feel a part of Toronto because new art is always emerging from that area.”

“Caitie approached me after she saw a play I co-directed named Wellborn,” said Lyons. “We know each other through a mutual friend.”

Lyons said that the script drew her to direct the play as it is very truthful and funny.

Graham said that she does not really know where the inspiration came from for the play.

“I haven’t experienced this type of loss. I have experienced loss through friends who have had their loved ones pass away when I was younger,” says Graham. “I remember the feeling of loss in those moments, not knowing how and being afraid.”

However, Graham says that her father is a comic book aficionado. “I use to accompany my dad to comic book stores. So there is a connection that this play is loosely based on. I was thirteen at the time as well and it brought me closer to [my dad].”

Graham believes there is definitely a nostalgia aspect to the play. “In terms of certain era, it has to be 2007, so about ten years ago. People like me, who are in their early 20’s can reflect on this, the moody and awkward times of that year,” said Graham through giggles. “[Paradise Comics] plays into my own moodiness and awkwardness at that time.”

In the direction of the play, Lyons said she wanted to get into the characters and portray what the characters are going through, which makes the play very much a situational study.

She explained that the feeling of the characters is that of grief as the protagonist, Beans’ father has run away from home.

“I wanted to take that feeling of grief and bring it alive on stage,” said Lyons.

In terms of her acting experience, Lyons as the director hopes she knows what the actors are going through.

“I think (I hope) I know what the actors are going through. And be understanding of the acting process. This way I can really see the arc of each character,” said Lyons.

Graham says her acting training as a student “really informs her work”.

“It gave me a sense of being present, like when things are truthful or not. The [writing process] took hours alone in my bedroom. This gave me time to think whether things were organized and not imposing,” said Graham. “[Acting training] made the writing process more natural like what’s underneath the line, the full body of the scene. It gave me more faith in the actors.”

Graham also found it nerve wracking to see her play come to life on stage.

“It is thrilling to see the range of work and how people enrich what I have written. It is humbling to see as they are treating [the play] with respect,” said Graham. “Like I said, this was a lot of writing by myself in my bedroom.”

According to Lyons, that the cast and crew really is a “dream team”. “Everyone wants to investigate what’s going on in the play.”

“This play makes connections to the fandom of comic books and how it brings people together,” said Lyons. “Comics are a sort of escapism and they are a source of fantasy. When life gets tough you come over it [through comics].” 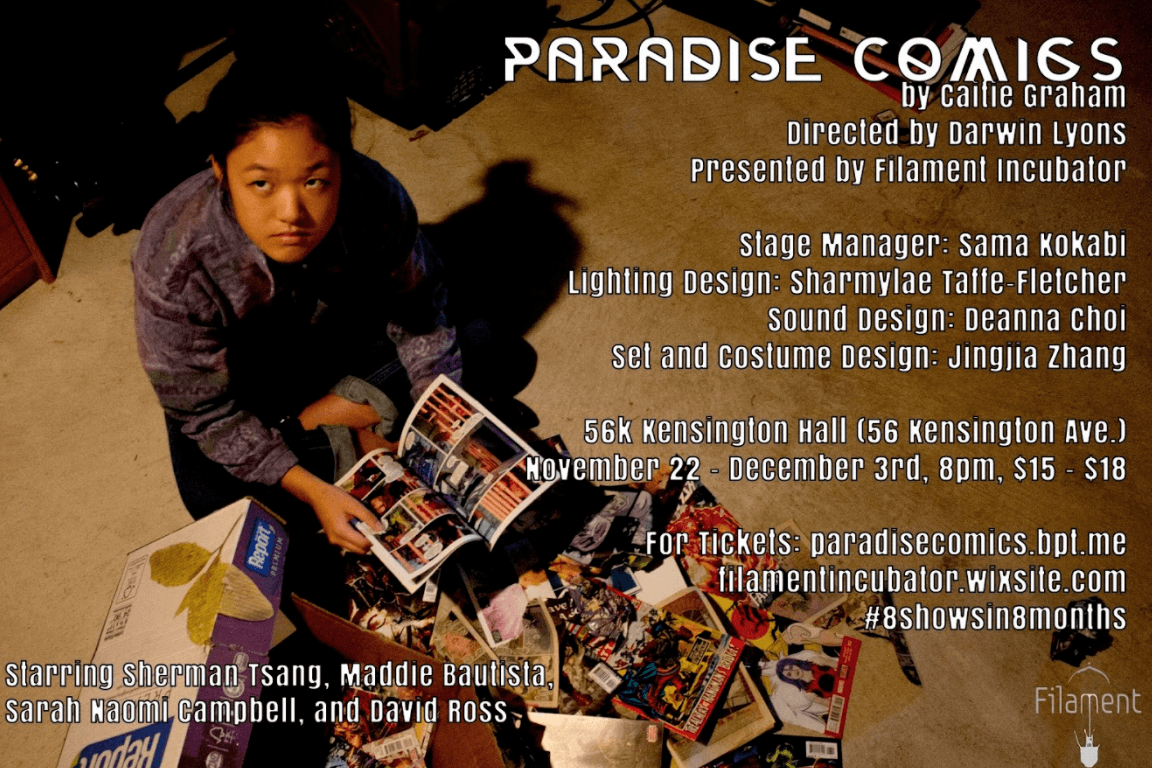 The exact location of the venue is 56 Kensington Hall. The preview of Paradise Comics is Nov. 22 at 8 p.m. The opening night is Nov. 23 and it runs through to Dec. 3, closing night.

Tickets can be bought at www.paradisecomics.bpt.me.