Ryerson journalism student Andrej Ivanov headed down to Washington on Jan. 21, to take in the Women’s March on Washington. Photos and words by Andrej Ivanov:

After the Women’s March on Washington “ended,” (I’m not even sure when people dispersed completely), I sat down, exhausted in a restaurant and started talking to a few people who attended. I asked them: “How would you explain this to a child? How do you explain it to someone who wasn’t here?” 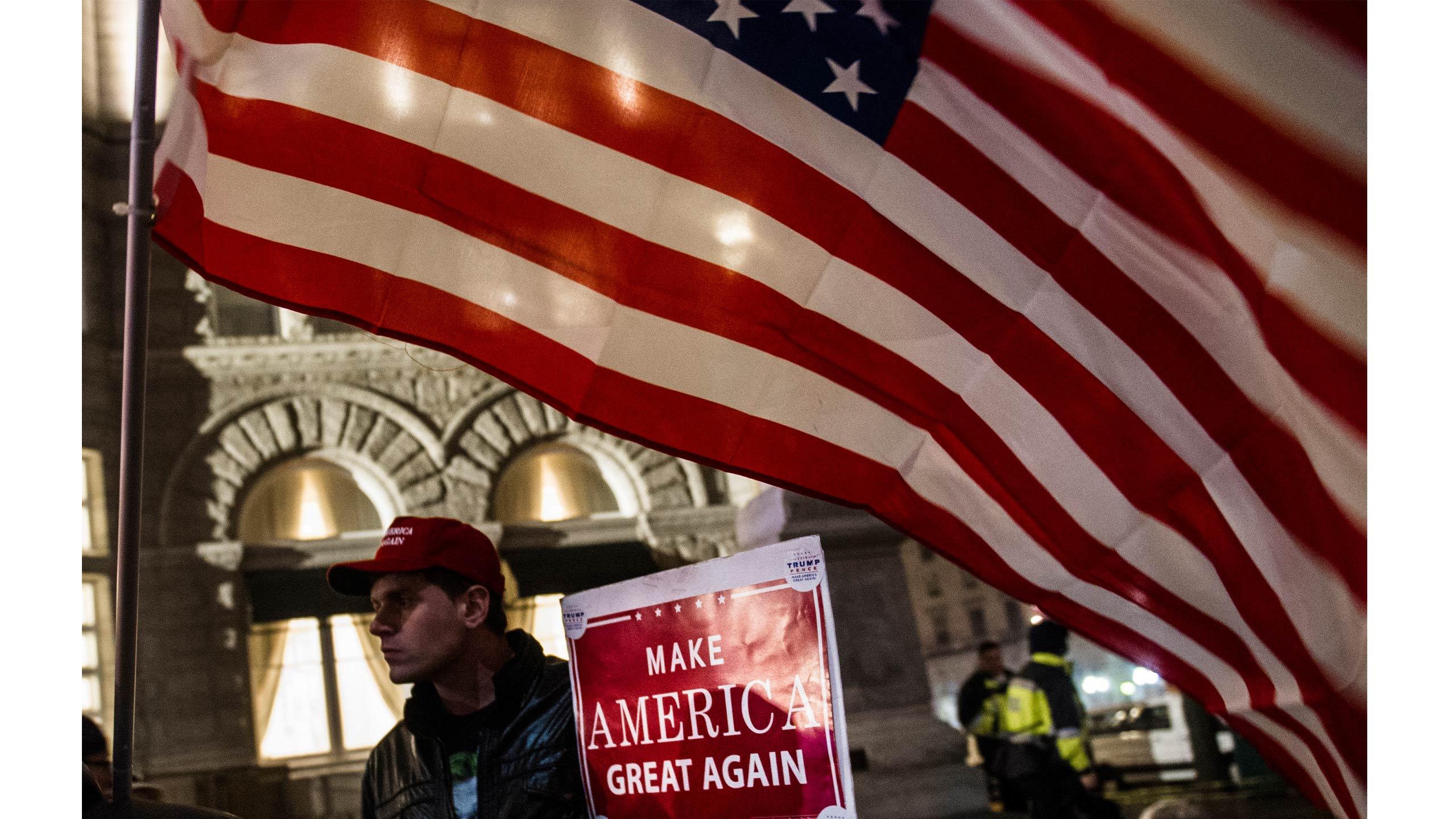 A pro-Trump demonstrator stands with his group in front of the Trump International Hotel in Washington, D.C. on Saturday evening. Several pro-Trump demonstrators were at the Women’s March on Washington. They were dwarfed in numbers compared to the upwards of 750,000 people that showed up from all over the U.S. and Canada to march. (THE EYEOPENER/Andrej Ivanov)

No one was able to come up with a concrete answer, except maybe a college teacher who said, “Well I would tell them to take the size of the room we are in and multiply it by several thousand.” And I think that was the point: It’s very hard to explain that sensation of being engulfed in a sea of people. It’s a mix of overwhelming and unity. When you find yourself in a sea of people of that magnitude, you experience a lot of emotions at once: sometimes it was calm, sometimes agitated; other times I would be in an open space; and at other times I was getting pushed from both sides by passersby or trying to fall into different groups walking around. I saw a woman even have a slight claustrophobic panic attack and the entire crowd around her turn around and do what they could to help her.

Being surrounded by this incalculable mass of people was probably one of the single most unforgettable experiences. It is both parts humbling and empowering. There was another small facet that may go unmentioned: It was a little nerve-wracking to go down there, because of all the reports and stories of people getting turned down. I was getting ready to go down there, I had been reading and hearing of people being turned away, and getting fingerprinted and photographed (which means pretty much being banned). I’m sure that anyone who read these reports got a bit nervous, and I was doubly nervous because some journalists got turned down, too. 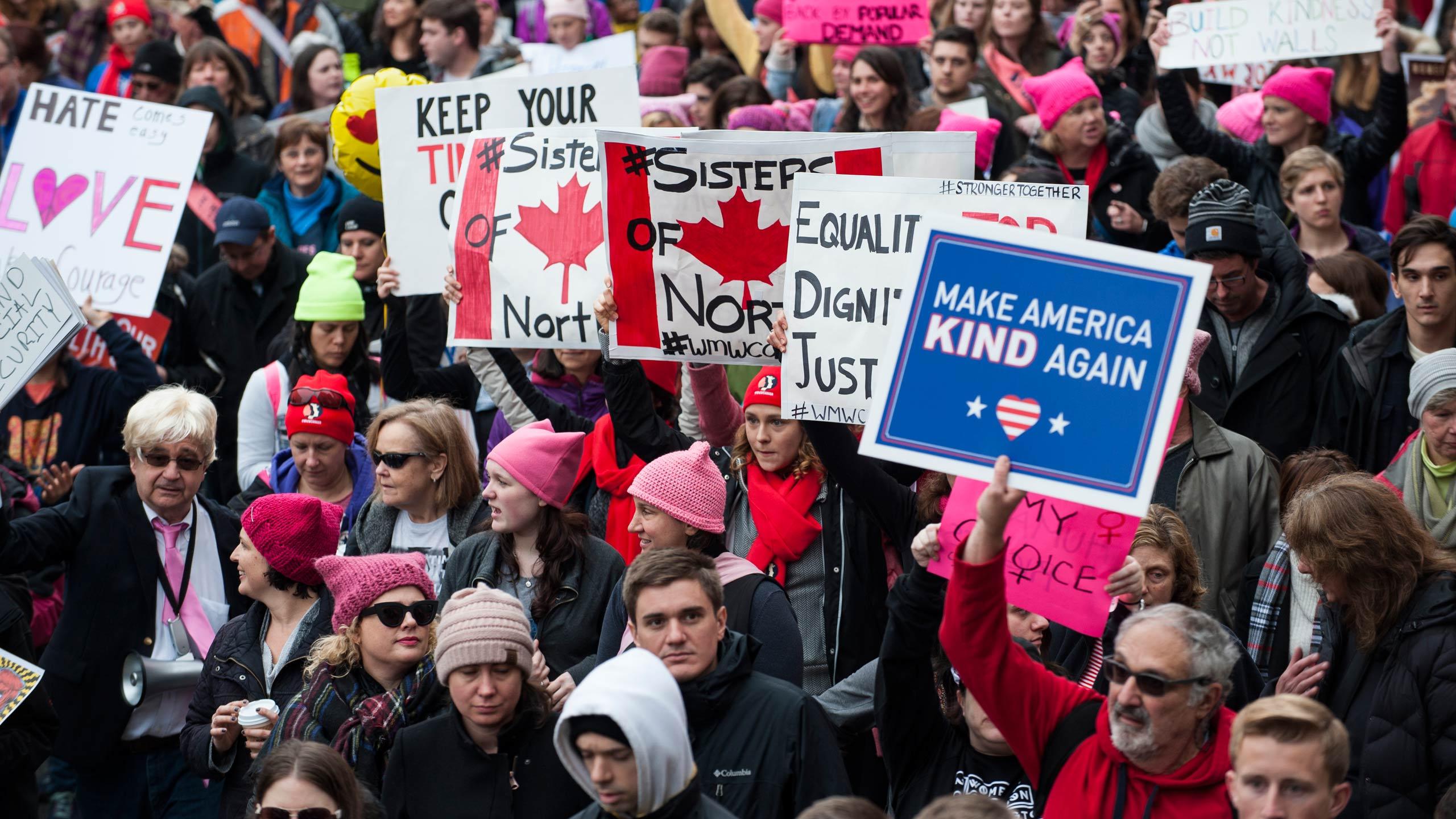 The Canadian Delegates participate with the at least half a a million attendees of the Women’s March on Washington on Saturday. (THE EYEOPENER/Andrej Ivanov)

Once we crossed the border, everything was fine; we got to D.C. and fell into the crowd. Everyone somehow went their ways and completely separated, within the hour. Some of us met back at the end of the night and talked about our day. Some marchers moved with the mass of people; others came and went from the march, sometimes leaving to sit down. I stuck around the entire crowd and constantly moved around, trying to get as much as I could. Our individual paths were all so unique, but we all walked away quite happy with our day.

I would like to add one important detail: I don’t think there was a single cause-oriented group that was absent. Every group in the LGBTQ+ community was there, those against the Dakota Access Pipeline were there, Black Lives Matter, Canadians, Americans, men, women, children, and I am sure I am forgetting a few. The point is that it didn’t matter who you were—everyone was there for one thing: human rights.