Andrea Elliott was the busiest spectator in the stands when Ryerson’s men’s basketball team won the school’s first-ever Ontario University Athletics (OUA) championship. It was a gold medal game for the ages. Ryerson stormed back from a 13-point halftime deficit to set up a nail-biting finish in front of an electric home crowd at the Mattamy Athletic Centre’s  Coca-Cola Court. But Elliott was barely watching.

It was March 12, 2016. After dominant regular seasons, both the men’s and women’s basketball teams were playing in OUA gold medal games. The men were hosting the Carleton Ravens, a perennial powerhouse and the defending provincial and national champions. The women’s squad was at the University of Ottawa, facing the Gee-Gees in Ryerson’s second gold medal game appearance in as many seasons. The games were on the same night. At the same time.

The women were still playing in Ottawa as the final buzzer signaled the men’s first OUA title. Elliott was supposed to be covering the women’s game, taking in the live stream on her laptop, and it looked like Ryerson would emerge victorious. But as the men’s home crowd rushed onto the court and the gymnasium descended into euphoric, champagne-soaked chaos, she knew the contest in Ottawa would have to wait.

Her boss was overseeing the men’s game, but there were post-game interviews and photographs to coordinate; athletes to assuage and reporters to wrangle; not to mention updates to be sent across the Rams social media platforms. She handed her computer to her boyfriend, frantically told him to keep an eye on the women’s game, and rushed to join the fray.

When Elliott returned  to her laptop, her night became even more hectic. Looking at the screen, it took her a moment to realize that Ryerson’s women’s team had triumphed in the nation’s capital. Just minutes earlier, Ryerson had exactly zero OUA championships to its name. Suddenly, the Rams had two. 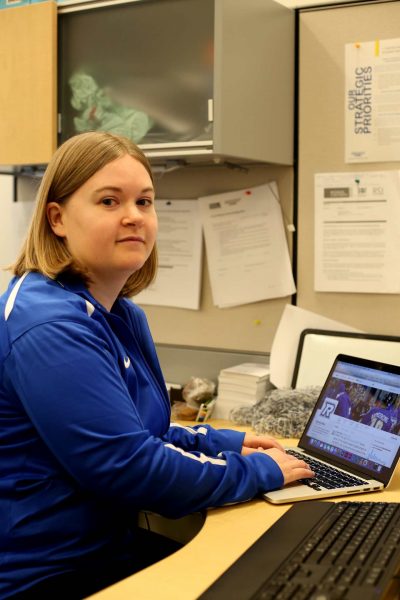 “I came out of the celebration, came over to the laptop and realized the women had won, so I was like, ‘Oh my God, what do I do?!’,” says Elliott. “We hadn’t really planned for that scenario, to be honest.”

As the men’s team celebrated with their fans on the court, the women’s win in Ottawa was announced over the PA system and a fresh wave of cheers and applause engulfed the gym. Elliott calls it a “crazy night,” and her favourite memory in five years as a sports information specialist for the Ryerson Rams.

Elliott joined the Rams at the start of one of the most interesting and exciting periods in Ryerson athletics: her first year was the inaugural season of Ryerson’s tenancy at the MAC. It was the culmination of a multi-year, multi-million dollar acquisition and renovation of the old Maple Leaf Gardens, a project that was followed closely in Toronto and across Canada. The move brought the school’s volleyball and basketball programs out of the low-profile confines of Kerr Hall’s gymnasiums and ended the hockey teams’ exile to George Bell Arena in Toronto’s west end, thrusting Rams athletics into the national university sport spotlight.

For Elliott, though, it’s less about the headlines and more about the individuals making them.

“They’re people who have great stories, and I like to be able to tell those stories and get to know them outside of being an athlete,” she says. “When I came here, one of the [hardest parts] was that I was on the ‘other side’ and that I had to not be afraid of athletes and getting to know them and talk to them as people.”

Elliott works on both sides of the media when it comes to Ryerson’s varsity teams. She writes game recaps, news releases and other articles for the Rams official team websites. She helps run the Rams official social media accounts and is involved in the marketing and packaging aspects of Ryerson athletics. She coordinates post-game media scrums and fields requests for interviews, accreditation and other general inquiries from external media outlets like campus papers. The job keeps her busy—her work weeks usually end up totaling around 50 hours-—and it’s likely that it will only keep getting busier.

Growing up in Ajax, Ont., Elliott always loved sports. She played rep. softball for eight years, and was a multi-sport athlete in high school, playing volleyball, basketball and running track and field. That affinity for athletics eventually led her to pursue a kinesiology degree at Wilfrid Laurier University.

“I wanted to stay involved in some sort of active field, and so that seemed like the best fit for me at the time,” says Elliott, sitting on the steps of a maintenance staircase in the bowels of the MAC. Just a few minutes earlier, she was directing athletes and reporters to their respective post-game interviews following back-to-back men’s and women’s basketball games. It’s nearly midnight on a Friday, and her work isn’t done. While some might find her schedule unappealing, Elliott knows that it’s standard procedure in the sports world.

During her time at Laurier, Elliott got a job with the event staff that organized and executed home games for the Golden Hawks. It sparked a passion that eventually led her to Ryerson.

“I fell in love with the university sport atmosphere,” she recalls. “So I kind of wanted to stick to that field.”

After graduating from Laurier, Elliott did a one-year postgraduate sport business management degree at Durham College, culminating in an internship with the Ontario Hockey League’s Guelph Storm in 2011. Her position at Laurier had given her plenty of experience with game operations, so she used her time with the Storm to try something different: media relations.

“I’d always liked writing when I was younger, so when I started that internship it came back [because] I got the opportunity to do game recaps and stuff for the Storm, so it piqued my interest again” says Elliott. “I think if you asked my mom, she always knew that I would do something like this.”

After her internship, Elliott secured a one-year media relations contract with the OUA for the 2011-2012 season through the connections she made at Laurier and Ontario Lacrosse, where she worked for three summers. Working for the OUA, she met Jim McLarty, the communications coordinator for Ryerson athletics. The next summer, McLarty reached out to Elliott to tell her his assistant was leaving Ryerson. McLarty asked if she’d be interested in the position, and Elliott the Golden Hawk became Elliott the Ram.

“I’ve been lucky in a sense, that people have helped me out along the way to get where I am,” she says. “That’s one of the things I always tell people: make good connections where you are and pay back favours and don’t take anything for granted, because you never know what somebody will do for you down the road.”

The Rams have become a force to be reckoned with since Elliott first came to Ryerson. Some Rams teams, like the men’s hockey squad, have earned their first-ever national rankings. The volleyball teams have made the OUA finals and the men’s team has gone to nationals, while the basketball teams have won the school’s first silver and bronze medals at national tournaments, in addition to Ryerson’s first OUA championships. 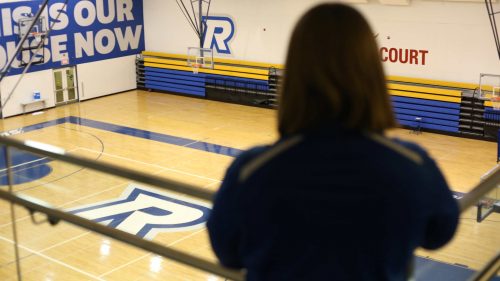 Between the opening of the MAC and the success of Rams teams over the past few seasons, Ryerson athletics has seen its profile and exposure increase greatly. That growth has only been exacerbated by the launch of Ryerson’s sport media undergraduate program—the first of its kind in Canada—in 2014.

“I think the biggest thing that’s changed my job is the emergence of the sport media program,” says Elliott. “The [locker room] hallways used to be empty and it was The Eyeopener and The Ryersonian—maybe—covering the games. It’s great that we have this program that teaches the students how to do interviews and all that stuff, but it’s [also] made more people aware of what’s going on.”

Ryerson has seen its athletic history rewritten again and again in the past few years as its teams reach new levels of success. And that’s just perfect for a self-proclaimed statistics fanatic like Elliott.

This fall, Ryerson unveiled redesigned websites for its athletics and recreation departments. Most Rams teams now have online databases that include year-by-year records, all-time player records and timelines of significant moments. Elliott spent hours compiling this information, scouring school records and pouring over old data in the OUA archives to retrace Ryerson’s athletic history as best she could.

“I was always trying to access that type of information because that’s the kind of stuff that I like to look for, and it didn’t exist,” she says. “It became a summer project because I wanted to be able to reference something.”

Elliott doesn’t wear a Rams jersey or coach a Ryerson team, but she’s a part of Ryerson athletics on a level few can match. It’s a good fit, one that she’s hoping won’t change any time soon.

“I find that in the [university] sports information world … it’s one of those things where people love it so much that they stay there forever; there’s not a lot of movement,” says Elliott. “So it’s not necessarily that it’s ingrained in me that I have to stay here forever, but I also am in no rush to go off somewhere else.”