The Eyeopener brings you the second installment in our series examining the stories of Ryerson’s varsity team captains. This week, Brenda Molina-Navidad explores the forces that drive women’s hockey captain Stephanie Chiste as a player and a leader.

When Stephanie Chiste was a child her family would play hockey in the basement of their home using tennis balls and ministicks. Eventually, Mattamy Home Ice—the NHL-sized rink at the Mattamy Athletic Centre—became Chiste’s home ice, where she would lead the Rams women’s hockey team during her final year at Ryerson.

Chiste is graduating from the university’s environmental and urban sustainability program this year. Over five seasons, the defender has made a name for herself in Ryerson’s athletic history. She was named team MVP in her rookie season and became an alternate captain during her third year with the team—the same season the Rams secured a spot in the Ontario University Athletics (OUA) playoffs for the first and only time since they joined the league in 2011.

The Rams were unable to make the playoffs this season. They finished the year in 11th place in the 13-team OUA after winning seven of their 24 games. It’s the fifth time in six seasons that the team has finished in 11th place or lower, including last-place showings in the seasons preceding and following their lone trip to the postseason.

The team has had their fair share of ups and downs, struggling to find consistency as a young program in a competitive league. For this season, her teammates and her coaches chose Chiste as the leader of the pack.

“[Being captain] means that people believe in me, said Chiste. “[They] believe that I’m doing the right thing.”

The story of the quiet girl who picked up her first ministick when she was learning how to walk starts in Nobleton, Ont.—an hour-long drive from campus. 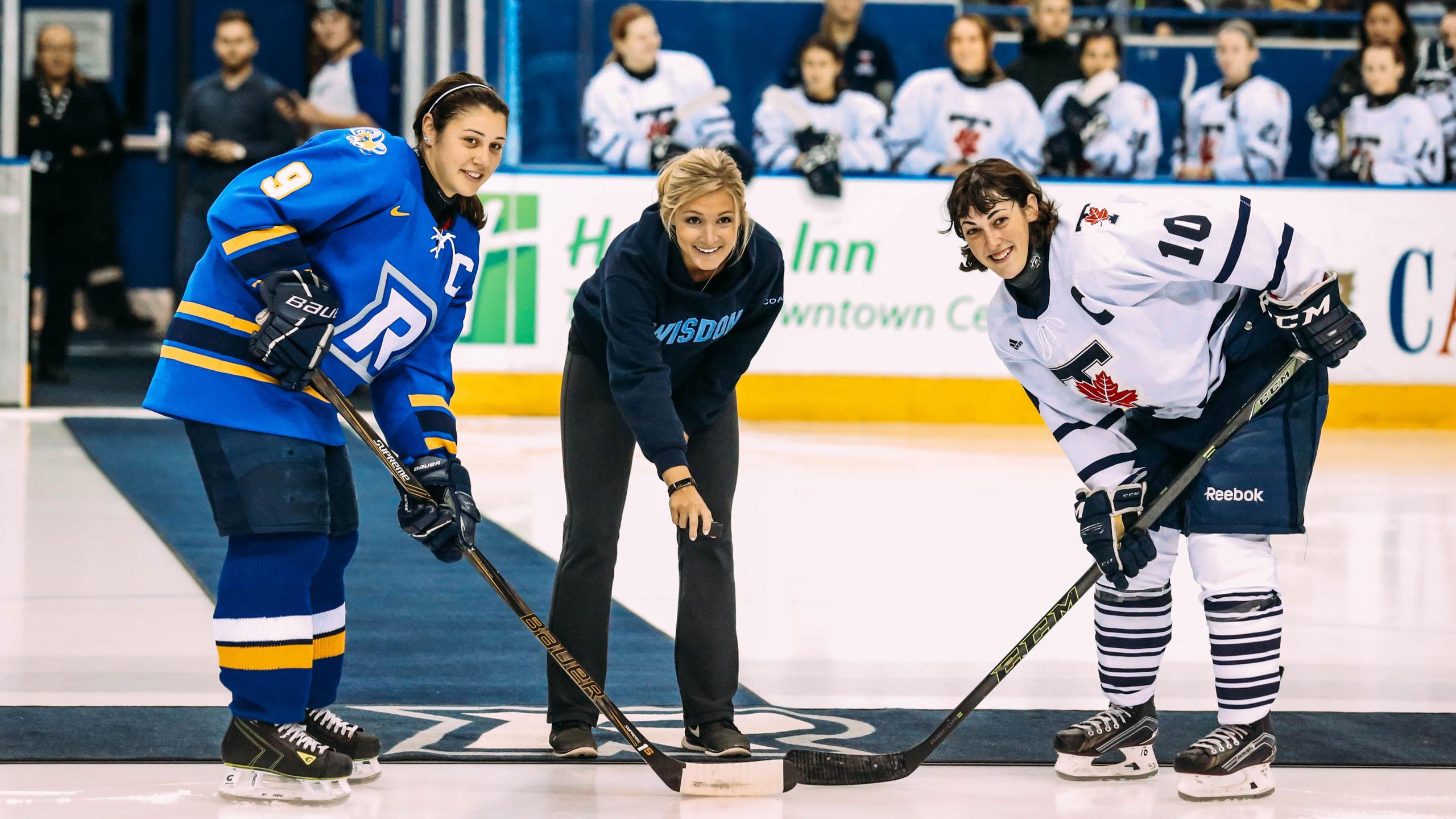 Her first minor hockey team was the Nobleton Knights. The Knights would compete against nearby towns like King City, Ont. and Schomberg, Ont. wearing the same jersey in different colours. Whenever and wherever she had her jersey and gear on, her family would be there to cheer her on.

“It’s always been a part of my family,” she said. “My dad played hockey so he made sure his kids loved hockey as much as he did.”

Her family’s role in her athletic career was so influential that Chiste’s go-to jersey number is the family’s lucky number, a symbol of the day her parents got married. Chiste needed to have a nine on the back of her jersey throughout her athletic career. As a rookie with the Rams, she wore number 22—fellow rookie Maddison Clouthier wore nine—before returning to her tradition in her sophomore season.

Chiste’s father was her official coach up until grade seven. Afterwards, he was her unofficial coach, giving direction and advice from the stands.

“He always stands in a spot where I can see him because I always look to him to see if I’m doing well.” She said. “He never sugarcoats anything and I like that; I like knowing what I need to do and he has these hand signals for when I’m doing something wrong.”

During Chiste’s time representing Ryerson, her parents have made it out to every game. Her father gives feedback while her mother provides support, always rooting for her. They were there at her first regular season game for the Rams—a 2-1 overtime home win against crosstown rival Toronto. It was a game she remembers feeling nervous for at first, but once the game started her nerves turned into excitement; she was always for high-energy and emotional games.

Chiste didn’t record a point in that game against the Varsity Blues, but she did pick up a pair of penalty minutes, giving Rams head coach Lisa Haley a glimpse of an impressively aggressive brand of hockey from her future captain—one that led her to a tie for this season’s OUA lead in penalty minutes with 48.

“Her style of play stood out pretty clearly,” said Haley. “Stephanie is a very powerful player with a great shot. I think she was able to compete in a very fast and physical style of game that we hadn’t had [from] anyone in our program yet.”

Although Chiste is the captain, she has support from her three alternates: Ailish Forfar, Alex Rodriguez and Kryshanda Green. Chiste calls them a “complete group” who compliment each other: Forfar has a positive and outgoing personality; Green is good at communicating advice to her teammates and reading the game; and Rodriguez—the only other returning player to wear a letter on her jersey—is funny and leads by example. It’s a similar style to Chiste’s, according to her coach.

Haley said the 22-year-old captain leads by example on and off the ice through her work ethic and consistency. “She’s more of a quiet person and carriers a big stick if you will,” she said. “She’s quiet but everyone listens when she’s talking, and everybody’s watching what she’s doing and they follow her lead.”

Haley added compassion to the list of descriptors, especially towards the players she leads.

“I can tell you one thing, nobody’s going to take any liberties with her teammates,” said Haley. “she’s very much ready to stand up for her teammates in any situation.” 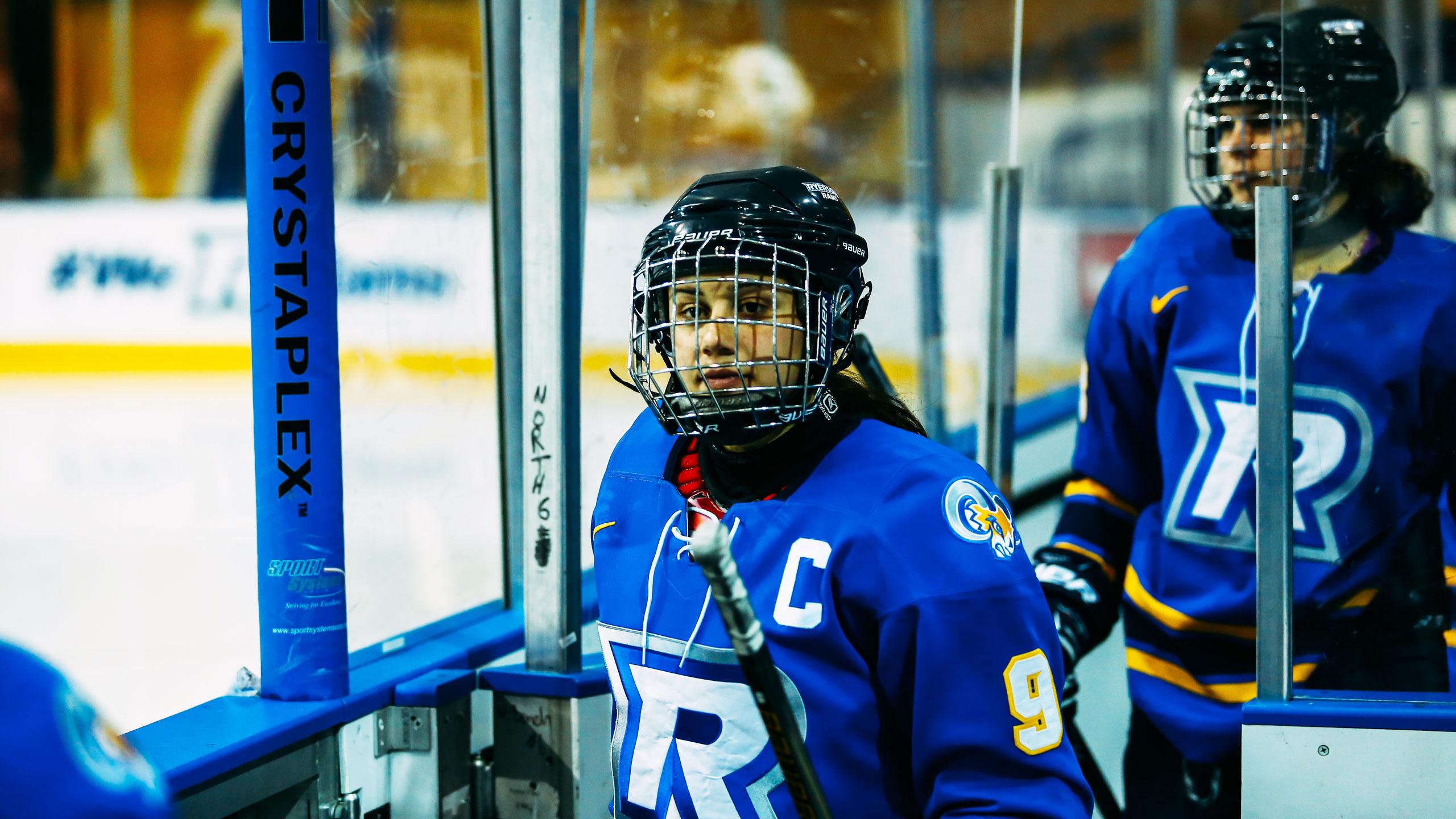 With a personality described by both Chiste and Haley as quiet, the captain said she found confidence through hockey, especially during her senior years. She said she has seen herself “break out of her shell” and feels confident in other areas of her life outside of hockey. She has worked to earn her team’s confidence and trust in her leadership, but said her teammates have taught her what it means to be a leader. For instance, after she was upset about the result of a game, they helped her focus on the bigger picture—playing the sport that she loves.

This year, the Ryerson women’s hockey team did not advance to the OUA playoffs. Chiste said that the pressure to make it to playoffs hindered their performance, but once the weight was off their shoulders pads, they were able to have fun and enjoy her last few games as a Ram.

Chiste has high hopes that the team can make it to the playoffs in the near future, and intends to return to the MAC to root for the Rams.

“She’s proven to be a go-to player for us,” said Haley. “Her leaving makes it big shoes to fill for anyone coming in behind her.”

Chiste does not intend on putting her name in this year’s Canadian Women’s Hockey League draft, but she does want to continue playing recreationally with her friends. She said coaching is a possible option for her future.

For now, she plans on taking a break from the sport, but hockey will always play a role in her life, just as it always has.

“Just put me in hockey,” said Chiste, recalling her philosophy as a child, one that led to a “C” on the front of her Rams jersey and the number nine on her back. “I just want to play hockey.”