The Eyeopener has confirmed that Ryerson Students’ Union (RSU) president Obaid Ullah initiated a planned walk-out with the RSU executive team at the RSU Semi-Annual General Meeting (SAGM) on Nov. 29.

The walk-out happened during the presentation of the motion for the RSU to organize a Holocaust education week. Samantha Cooper, a member of Hillel at Ryerson, proposed the motion and made an amendment to have the event be focused solely on the education of the Holocaust, and no other genocides. 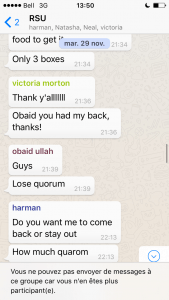 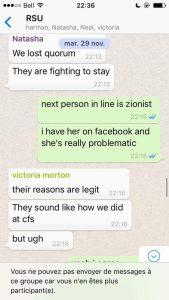 RSU vice-president equity Tamara Jones sent The Eye a screenshot of a message Ullah sent to the RSU executive team asking them to “lose quorum.” The message was sent a 9:39 p.m. and the Holocaust education motion was presented at 9:40.

According to another screenshot obtained by The Eye, Jones responded to Ullah with a message that reads, “next person in line is zionist” and “I have her on Facebook and she’s really problematic.”

According to another screenshot sent to the The Eye by a student who asked to remain anonymous, Ullah asked the student to “please leave” at 9:42 p.m.

It was also reported that a significant number of students were walking out immediately before and during the Holocaust education motion. Quorum was recounted twice and was officially lost at 10:03 p.m. The motion was later passed at an RSU board meeting.

QUORUM HAS BEEN LOST. The remaining items on the agenda are pushed to the next @RyeSU board meeting @theeyeopener #RSUSAGM

Ullah posted a statement on Facebook that read, “I asked people to lose quorum, but this was not because of the motion. I was informed about an amendment that would be brought forward very shortly before the board meeting and I was alarmed.”

“I asked a small number of people to lose quorum to end the meeting and table the remaining motions to the board meeting. The intent of me messaging people was to keep the room united and not cause heat (tension) by the amendment,” the statement read. “Now you may ask, Obaid is that really the right thing to do? No it isn’t. I should not have asked anyone to leave a RSU SAGM.”

Before The Eye obtained additional screenshots of the conversation with the responses from Jones and Morton, Ullah said in an email, “I never asked students to leave the meeting because of the motion. Any accusations that I do not support the Jewish Community is unfortunate.”

“I have always taken an effort to be there for the Jewish community.”

Students Supporting Israel (SSI) member Tamar Lyons commented on Ullah’s post that she is does “not appreciate [her] struggle being capitalized on and used as a forum for certain RSU members to target others.”

“These screenshots existed before, yet they are only conveniently being brought out now. If the execs who sent these to The Eyeopener REALLY cared about anti-Semitism, why wait until its too late to do anything about it? Why didn’t they speak out right after the AGM?”

Jones provided a statement in response to the screenshot: “To clarify my message, the person who was in line is a self-proclaimed zionist, and she does have viewpoints that I don’t personally agree with—but I would never stop her from speaking, especially to justify this motion. I was pointing out that we might need anti-harassment officer to step in if conversation got heated because I know that lot of folks are not kind to her.”

Before the remaining conversation was sent to The Eye, Jones said she went to the bathroom when the Holocaust education motion was being presented and that she didn’t check her messages because she turned off the notifications. Jones said when she finally saw the message, she “didn’t put two and two together” and that she “was focused more on addressing the issues among the students in the audience and providing support.”

“This was a gruelling 3+ hour meeting that was difficult for me on many levels. I got the text at the same time when my supporters were asking me if they could go and I’d say yes, they were welcome to leave,” her statement read. “But let me be clear, I didn’t ask anyone to leave. I didn’t see there as being any way that this motion wouldn’t pass, I genuinely didn’t believe it was controversial.”

Prior to the initial screenshot Morton told The Eye, she was disoriented when she received Ullah’s message to “lose quorum” because the motion calling for her resignation was prior to the Holocaust education motion,” she said. “It didn’t occur to me until this month that Obaid could be [involved].” However, in a separate screenshot of a conversation between Ullah and Morton, Ullah told her to “get all your people out right now.” Morton responded with, “ok trying.” 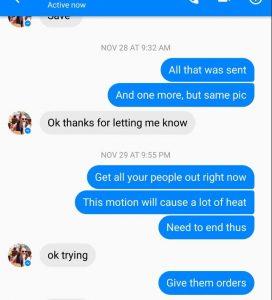 Following the SAGM, multiple news outlets, including the Toronto Star, reported on the incident, deeming it anti-Semitic. Ryerson also released a statement.

“Obaid has given an explanation that this was done to help the Jewish community, frankly I believe that this is insincere,” wrote Ryerson student Aedan O’Connor in a Facebook status. The Eye previously reported O’Connor was the social justice chair at Hillel Ryerson, but she said she wrote her status as a “Jewish activist” and not on behalf of the group.

“He only admitted to this after these screenshots were released.”

President of SSI Rebecca Katzman said, “Our pro-Israel and Jewish community remains strong and united at this time. We will not let the internal issues of the RSU deter us from educate our peers about the Holocaust and spreading our message of peace and co-existence.”

Lyons also commented on Ullah’s post that “the entire RSU is accountable and NOT just Obaid. Where were Tamara and Victoria when I reached out to them just days after the AGM?”

“RSU, you need to get your shit together, and you need to stop the anti-Semitism we have on campus. But you also need to STOP capitalizing on it. Enough is enough, and we’re not going to let people use our struggle to serve their own needs. In any other minority group, this would be considered a hate crime.”

Jones said the RSU met with members of Hillel at Ryerson and SSI to discuss how they could be supported on campus following the SAGM. “There’s a lot less talk about anti-Semitism than there is about Islamophobia within the equity service centres,” Jones said. “And that’s something we need to actively work on.”

Harman Singh, vice-president student life and events, did not respond to questions prior to publication.