Sacha Katz and Quinn Fisher met for the first time at Toronto Rock Summer Camp when they were in elementary school. Between the hours spent covering Rush songs and food fights with chocolate lava cake, the two laid the groundwork for what would eventually evolve into their current band, Greenhouse.

On March 8, the band of four will release their first ever music video for their self-titled track, Greenhouse. The video will premiere on Ohestee, a Toronto-based indie music blog. The band was also recently featured in ELLE Spain.

Greenhouse is fronted by Katz, a first-year Ryerson creative industries student. He is the vocalist and guitarist, and has been branded by his band members as the band “dad.” 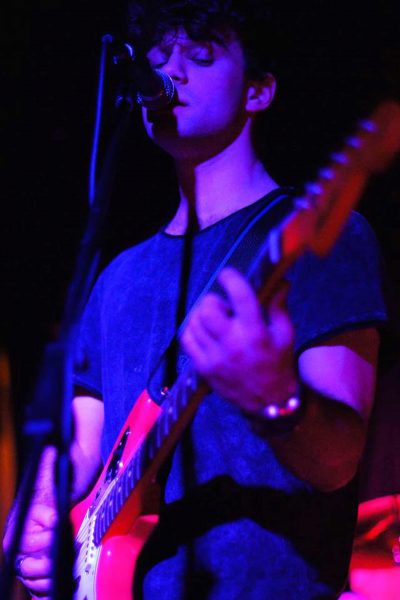 The other three members of the band are finishing high school.

Fisher is another vocalist and guitarist, Hugh Hart is on bass, and Joe Flan plays drums.

Greenhouse labels their sound as shoegaze—a motionless performing style focussing only on pure sound, originating in the late ‘80s to early ‘90s—but say they have lots of varied influences in their work from bands like My Bloody Valentine to The Strokes.

“The type of music we play isn’t easily labelled,” Fisher said. “[The style] is something we can’t really put our finger on, that’s what gives us a unique aspect.”

The featured track is about vulnerability, specifically in relationships, and the music video reflects this.

“A greenhouse is completely glass, you can see all through it, kind of like being vulnerable in front of someone else,” Katz said. “You’re allowing someone to see into you.”

The band headed up to Puslinch, Ont.—a small town in the middle-of-nowhere—to shoot the music video. The video was filmed and directed by Aidan Cheeatow, a York student and filmmaker. They filmed the video over a couple of days. It follows Katz and a girl on a drive in the country, making empty roads and gas station stops look romantic and dreamy. It leads up to a scene of the girl dancing completely freely and uninhibited in an open field.

“If you’re really in love with someone, showing them who you are is as scary as dancing,” Katz said. “But it can also be as easy as dancing in an open field.”

Greenhouse recorded their first EP almost a year ago at Candle Studios in Toronto. It came out in the summer and they have been performing it live all over Toronto ever since, along with their new songs.

They have also sold out their past couple of shows, which they said they couldn’t be happier about.

“Once my dad had to lie and say he was the guitar tech to get in because it was sold out,” Fisher said.

While filming the video for Greenhouse, the band also collected footage for their second music video, which is projected to come out in early May for another song off their EP, Part-Time.

They will be going back into the studio in April to record acoustic, lo-fi tracks.