HALIFAX—Make it seven straight national championships for the Carleton Ravens.

Ryerson’s men’s basketball team couldn’t overcome the defending champions on Sunday, falling 78-69 in the U Sports gold medal game at the Scotiabank Centre.

Barely a week after beating the Ravens on their own court to win Ryerson’s second consecutive Ontario University Athletics championship, the Rams couldn’t slay the giant a second time. It’s Carleton’s seventh straight national title and 13th since the inception of the tournament, the most of any school in the country.

[ngg_images source=”galleries” container_ids=”328″ display_type=”photocrati-nextgen_basic_thumbnails” override_thumbnail_settings=”0″ thumbnail_width=”100″ thumbnail_height=”75″ thumbnail_crop=”1″ images_per_page=”20″ number_of_columns=”0″ ajax_pagination=”0″ show_all_in_lightbox=”0″ use_imagebrowser_effect=”0″ show_slideshow_link=”1″ slideshow_link_text=”[Show as slideshow]” order_by=”sortorder” order_direction=”ASC” returns=”included” maximum_entity_count=”500″]“It is going to take some time just to heal these wounds,” said Rams guard Myles Charvis, who finished with nine points, two rebounds and a pair of steals. “When we get back to this point, we know what to do and we know the feeling that we want. We want to see the cameras facing us and not facing the opposite direction.”

Trailing 60-36 with three-and-a-half minutes left in the third quarter, the Rams put together an incredible 26-8 run in under 10 minutes spanning the third and fourth frames. Ammanuel Diressa, Keevon Small and Charvis all hit critical three-pointers to keep the Rams in the game as Ryerson shot 4-9 (44.4 per cent) from beyond the arc in the third.

It looks like @RyersonMBB are turning up the heat! Time to close this gap and take the lead! Score set at 68-62 Carleton.

“You’ve got to play four really good quarters and I don’t think we did that,” said Rams head coach Roy Rana. “We had a tough first half and dug a pretty big hole for ourselves.

“We had a couple tough possessions and they converted down in the other end and that’s what it came down to.”

Rams big man Adam Voll led his team with six points in the fourth quarter, including a pair of huge tip-ins to keep Ryerson within striking distance. But a hoop-and-harm three-point play from Ravens guard Connor Wood with 20 seconds to play put the game out of reach.

It was Wood’s biggest contribution of the game, as Ryerson held the reigning U Sports men’s basketball player of the year to just six points on 1-8 shooting, including 0-7 from three-point range. Ryan Ejim led the Ravens with 19 points while Kaza Kajami-Keane was named Carleton’s player of the game with a 15-point, 11-rebound double-double performance.

Voll finished with 12 points and a team-high nine rebounds. Playing in the final game of his Ryerson career, Adika Peter-McNeilly was named the Rams’ MVP, posting a game-high 23 points on 8-19 shooting (42.1 per cent), including 15 in the first half. He added four rebounds and a pair of steals.

The fifth-year guard fouled out with 12 seconds to play, receiving hugs from coaches and teammates and an “Adika Peter-McNeilly” chant from the Ryerson fans that travelled with the team for the tournament. It was also the final Ryerson game for Juwon Grannum, who finished with three points and three rebounds. 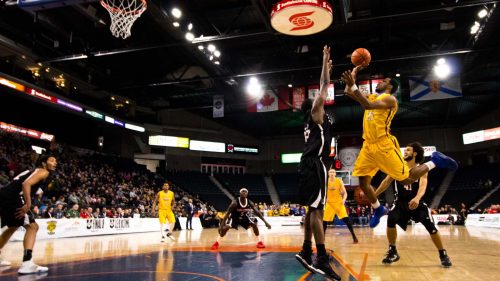 “We didn’t shoot the ball well the whole tournament and found a way to win two games,” said Rana. “Against Carleton, you have to shoot well. We did at their place when we beat them, we didn’t today and we lost in a pretty close game in the end. We fought our way back and I take great pride in that.”

Carleton’s dominance carried over into the first half of the third quarter as the Ravens opened the second half on a 21-8 run. All but three of the Rams’ eight points over that span came from free throws before Charvis hit the first of his two three-pointers to spark Ryerson’s comeback.

The Rams beat the Saint Mary’s Huskies 79-70 in the quarter-finals and edged out the tournament host Dalhousie Tigers 59-58 in the semis to advance to their first championship game appearance.

After claiming bronze at each of the last two tournaments, the second-place finish marks the best season in men’s basketball history. It’s the second national silver medal in Ryerson history after the women’s team lost their gold medal game in the 2016 tournament. With Peter-McNeilly and Grannum as the only fifth-year seniors on the team, the Rams should be a national contender again next season with most of the roster presumably returning.

“It’s bittersweet because we still made history, but we didn’t make the history that we wanted to make,” said Charvis. “We just have to keep working hard and get back to that point again.”