In my first year at Ryerson, I thought student politics was essentially a bunch of smiling students sitting around a table discussing how to organize a dance, or some sort of prom committee bullshit.

But it wasn’t until this year, when I became a news editor at The Eyeopener, that I realized student politicians actually have a lot at stake: reputations, friendships and future career prospects.

It also wasn’t until this year that people involved in the campus political scene seemed to care about my opinion. During the Ryerson Students’ Union (RSU) elections, I jokingly Tweeted about wanting to write about my experiences covering student politics. A minute later, I received responses from a few followers encouraging me to do so. So, for my three fans, this one’s for you:

Reporting on student politics is more interesting than I expected it to be. It’s essentially a soap opera with too many seasons, and I get to play Big Brother. 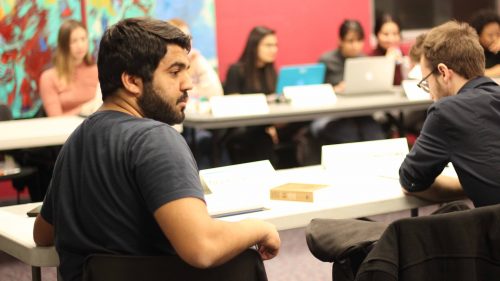 Executives snap at each other in board meetings, and board members act like they’re best friends when I know how they really feel about each other. This year especially, there is a lot of tension because of 6 Fest drama and a lack of communication and transparency with the executive team and the board. Did I mention that there’s also a massive deficit?

Some student politicians I’ve interviewed have told me that talking to reporters is like therapy. This is where “off the record” comes into play—they’re free to bitch, complain and gossip knowing that I can’t report it.

I’m not about to spill any RSU secrets (because ethically and legally I can’t), but I will say that covering student politics has changed the way I view my relationships with people. You never really know who is genuinely being nice to you and who wants something from you; you never know who’s being honest and who has an agenda.

Whenever I write a story, I have to set aside all of that petty drama and report in a way that’s accurate, fair and critical. But there’s a whole other side to everything that happens within the RSU—the things the average person doesn’t see. Relationships, personalities, ideologies and core ethical values all play a role in what decisions are made, but it’s not always easy to get all of that from reading an article in the news section. And that’s why this week, I wanted to write the feature about politics from the inside.

Do I love the drama? Yes, it’s fucking entertaining.

So no, I’m not personally out to get anyone. The RSU execs all have a salary of about $36,000 each—not criticizing them would be irresponsible.

With all of that being said, I’ll continue to sit through dramatic board meetings, I’ll keep Tweeting about the “revenge” sweater that vice-president operations Neal Muthreja wears on the regular, and I’ll keep trying to hold these people accountable. I’ve been doing this for long enough now to be able to distinguish between gossip and the things you deserve to know about.