Ryerson graduate Cleopatria Peterson is being featured in the Toronto Comics Anthology’s fourth volume. Peterson, a graduate of the fashion design program, completed illustrations for a story written by her friend Jeff Estrella.

Caddy is the story of two Scarborough boys trying to steal a Cadillac as a ritualistic step to get into a gang. The comic explores their relationship, as one character is in love with the other.

Estrella chose Peterson as an illustrator because both had an upbringing in Scarborough.

“We both come from a similar background…when I’m telling a story she kind of gets what I’m trying to say and the visuals that I want to portray into the story,” Estrella said.

The story echoes Peterson’s priority for representation in stories. According to Peterson, representation is also reflected more and more in every anthology released per year.

“Diversity is really important to me [in] media that I interact with and the work I want to put out because I feel like we need more diverse storytelling. So it is something that I try to be very conscious of when I am producing my work now,” Peterson said. 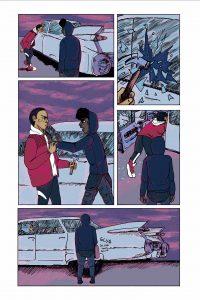 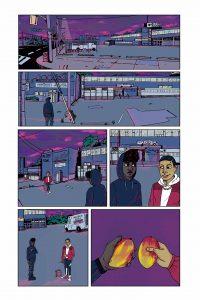 Peterson described her artistic style as detail-oriented with a focus on line-work. She said nature often comes up in her personal work, as it is a good way to explore different textures. Peterson has been illustrating since a young age, and was introduced to working with comics around three years ago.

Peterson was able to explore different ways to tell stories while at Ryerson. Learning halfway through her degree her interest was not in fashion marketing, she took illustration and transmedia classes and did some work in comics and storytelling.

“[The program is] so wide in what they taught us. Like now, I know all sorts of things that I wouldn’t have before and you can put that into your work in different ways,” said Peterson.

Peterson is currently working on illustrations for an upcoming zine. After doing three comics projects including both the third and fourth volumes for the Toronto Comics Anthology, she said she is looking to take a break from them to pursue other illustrations.

A collection of comics from local artists, illustrators and writers, the Toronto Comics Anthology is an annual crowdfunded series. This year’s edition will be released at the Toronto Comic Arts Festival in mid-May.