Abdallah El-Chanti pushed the Ryerson Rams past the University of Ontario Institute of Technology (UOIT) Ridgebacks, scoring in the game’s dying seconds to secure a 3-2 win.

Back on their home field at Downsview Park, the Rams’ men’s soccer team continued their undefeated streak against the Ridgebacks. After notching their first tie of the season last weekend against the Carleton Ravens, the Rams got back to their winning ways on Saturday.

“It was a great moment for the team,” said El-Chanti.

The Rams made their offence felt early, scoring the game’s opening goal in the first five minutes. They kept their 1-0 lead throughout the first half, and then added another thanks to striker Nick Lambis, who scored in the 51st minute. 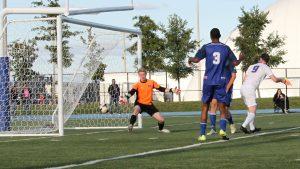 But the Ridgebacks didn’t give up. Striker Fabio Campoli scored, and his goal was then followed just four minutes later by defender Quintyn Walcott, who scored in the 63rd minute.

The Rams and Ridgebacks would turn up their physicality once they found themselves at 2-2. They combined for six yellow cards, with the Rams receiving four of those bookings.

El-Chanti would ultimately emerge as the game’s hero by scoring in injury time. But even with the win, and a No. 1 seed in the OUA East, Rams head coach Filip Prostran wasn’t impressed.

“After we scored the second goal we lost focus,” said Prostran following their 3-2 win. “We were really fortunate to come away with three points today.”

“We have a lot of work to do,” said Prostran. “We’re far from where we need to be for sure.”

UP Next: The Rams will be facing the Trent University Excalibur on Sunday Sept. 10 at Downsview Park starting at 7:30 p.m.