“He’s an absolutely unique player, the type I’ve never really had the opportunity to coach for a season at any level,” Rana said in a press release. “He’s seven-foot-two, very long, can shoot it and is athletic. He’s a legitimate pro prospect at the highest level.”

“We’ve always dreamed about having an international player as part of our program, but we’ve never really found a way to make it happen,” he said.

Ngom hasn’t arrived in Toronto to meet his teammates yet, but once he does, he will be hard to miss.

Other new Rams include Zubair Seyed and Liam O’Leary-Orange, two players who arrived at Ryerson with high expectations.

Seyed, a five-foot-11 point guard from Cambridge, Ont., will provide depth at the point guard position after former Rams recruit Jordan Henry announced he was transferring to the Western Mustangs. During his senior year of high school, Seyed set an Ontario Federation of School Athletic Associations record for most points in a gold medal game with 52. 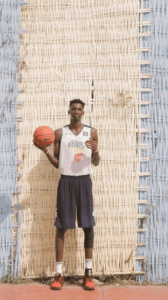 “He’s got the right attitude and he’s pretty tough and talented and I think he’s got a tremendous future here,” Rana said.

O’Leary-Orange has already spent a full year with the Rams, but couldn’t play last season due to his transition to full-time studies. Rana has confidence in the six-foot-eight small forward to succeed in 2017-18.

“He basically toughed through a year last year to get himself ready academically and I think he grew as a young man and as a basketball player,” said Rana. “He’s an absolute tremendous athlete; his numbers, especially explosiveness, is amongst the highest I’ve ever seen. It’s a really nice story for us to be able to start his growth and journey with our team.”

Ngom, Seyed, and O’Leary are not the only recruits ready to join the two-time Ontario University Athletics (OUA) champions. In addition to the three aforementioned players, the men’s basketball team will be bringing in Nathan Culbreath, Nikola Urosevic, Jayden Frederick, Oluwakayode Fakomi, and Jean-Victor Mukama.

Culbreath is a transfer from York University who will be in his fourth-year of eligibility this season. He will bring experience to the Rams as well as some pedigree, having been named to the OUA All-Rookie Team in 2014.

Urosevic is seen as a versatile player who can play multiple positions with ease. Despite suffering an ACL injury last year, Rana has faith he’ll be a big addition to the Rams.

“He’s going to be a big piece to our program for multiple years,” said Rana. “He can play multiple positions and is very athletic and long and is a great student.”

Frederick and Fakomi won’t be eligible to play for Ryerson until 2018-19 due to OUA transfer eligibility rules, but both will gain valuable insight on the team this year.

Mukama is not regarded as a recruit, but rather a returning member who missed last season to focus on his academics. After helping Ryerson win their first Wilson Cup in 2016, he’ll bring the team a much-needed boost with his leadership.

The Rams and their new recruits will begin U Sports play on Oct. 7 when they take on the Saskatchewan Huskies in a pre-season matchup. The OUA regular season commences on Oct. 27, when the Rams hit the road to face the Algoma Thunderbirds.