All photos by Brent Smyth

I stepped on the mound and felt myself freeze.

In baseball—as in life—things don’t always go your way. You hit a perfect line-drive, but it’s right at the third baseman; you paint the outside corner of home plate with a sneaky slider, and the umpire calls it a ball; and other times, like during our preseason opener, your coach hands you the ball in an emergency relief situation with two outs in the bottom of the ninth.

“No pressure, just throw a few strikes and your job will be done,” he said.

During my warm-up, I was pitching worse than ever before. Something wasn’t right. I tried to shake the feeling, but it got worse the more I thought about it. And then the batter stepped into the box. Suddenly, for the first time in my baseball career, I forgot everything I knew about pitching, a task I’d been trying to master for 10 years. I experienced a feeling of self-doubt I’d never felt before, and the game I loved turned against me, leaving me out on the mound alone and stunned, with a batter staring me down from 60 feet and six inches away.

Baseball is a simple game. I mean, as a pitcher, I know what I’m throwing and the other guy hasn’t a clue what’s coming.

“I experienced a feeling of self-doubt I’d never felt before, and the game I loved turned against me”

After all these years, it shouldn’t be challenging to hit the catcher’s glove. After all the countless hours I’ve spent working on this exact motion, you’d think this wouldn’t happen, yet there I was, frozen.

Everything stood still. On the mound, I questioned everything I knew about playing baseball; as my coaches, friends, teammates and father watched, I felt the pressure and doubt build steadily.

I was shocked. After I started taking medication for depression and anxiety in February, I was throwing some of the best bullpen sessions of my life heading into the season. Now, I couldn’t even hit the strike zone. 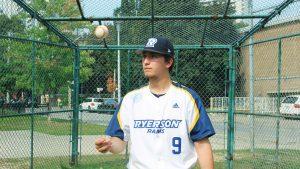 The game had always been my escape, my sanctuary. Baseball used to be natural. It was hits, walks, strikes and steals. When I was depressed, it wasn’t.

Something wasn’t right with me anymore, and I felt myself spinning out of control. After months of not playing, I was really looking forward to coming into the season and hitting the ground running. But, standing there on the mound in that opening game, I didn’t think I’d ever get out of the inning.

All I needed was one out; I couldn’t even throw one strike.

Similar to my battle with depression in general, my pitching struggles came out of nowhere, and I felt like there was nothing I could do to beat it. I wasn’t myself, things weren’t going the way I wanted them to, and in a matter of minutes, my confidence—something I thought I’d never lose—was gone.

“Baseball used to be natural. When I was depressed, it wasn’t”

It’s amazing what you convince yourself of in times like these: I’m not good enough. I deserve this—I did something wrong and this is my punishment.

Any sense of negativity becomes true. You tell yourself this is the lowest you’ve ever felt and it’s not going to get better. You think back to good memories and say they don’t matter. And with all this going on in my head, I still had to pitch and prove to my coach he could trust me on the mound in the ninth inning.

My former solace was now a part of the problem. On the field, I told myself the inning would never end, and even if it did that the next time out on the mound would only be worse. I almost hit a couple batters, tossed several pitches way outside and, at one point, threw nine balls in a row. My anxiety rose with each missed pitch, forcing me to abandon my curveball.

I decided to just throw fastballs and hope for a pop-fly. Five batters later, I threw a heater and the batter laced it up the middle. It zoomed past me, and I prayed my middle infielders would make the out, and thankfully, they did. I took my glove off, put my head down and walked off the mound. And just like that, I was back in the dugout surrounded by my teammates, and I no longer felt alone.