In the first meeting of the 2017 season between Ryerson’s women’s soccer team and the Carleton Ravens, the Rams surged to victory with a pair of late goals to drive a comeback win in Ottawa.

At Downsview Park on Sunday afternoon, Ryerson had a different plan, routing the Ravens 5-1 on the strength of a relentless attack that began as soon as the referee blew the opening whistle and didn’t stop for the rest of the match.

Just 30 seconds in, the Rams got the better of Carleton’s keeper, taking an early lead on a gorgeous goal by Victoria Watson—the rookie’s fourth marker of the season and her first of two on the day.

From then on, the Rams kept up the pressure, firing on net at every opportunity they had.

Ten minutes after Watson opened the scoring, Ryerson added to their lead, thanks to the boot of another rookie.

After Ryerson was awarded a free kick just outside the box, Savahnna Robinson stepped up to and blasted a mighty shot over the wall and into the top corner. It was a milestone goal for Robinson as it was her first of the season and first-ever career collegiate goal.

The Rams could’ve sat back, but instead, kept their feet on the gas pedal. Minutes later, Watson struck again, burying her second goal of the game and her team-leading fifth of the season on a breakaway.

“Today I showed I’m a team player, striker and that I can score if I put my mind to it,” Watson remarked after the game. 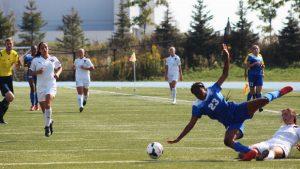 Victoria Watson eyes the ball as she tumbles to the ground. (Photo: Sarah Krichel)

Only 16 minutes into the match, Ryerson had scored three goals, as many as the team mustered in their previous four games combined.

In the 21st minute, Carleton’s Cheyenne Bent slid a shot past Rams goalie Elisa Lapadula’s far side on a give-and-go play to cut the lead to two. The Ravens got some momentum after the goal, but couldn’t beat Lapadula again for the rest of the match.

Alessia Carvalho restored the Rams lead to three just four minutes later with her second goal of the season.

By halftime, the Rams had scored an astounding four goals; in nine games this season, they had only scored seven.

The second half was more of the same for Ryerson, and in the 58th minute, Katherine Sollbach scored the team’s fifth and final goal of the day.

The Ravens tried to chip away at the Rams’ commanding lead. But even when awarded a penalty kick, Carleton was unable to convert. It just wasn’t their day. 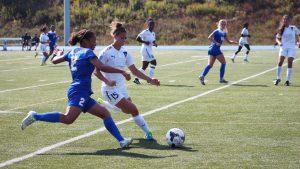 Rams defender Katherine Sollbach battles for the ball in the second half. (Photo: Sarah Krichel)

Behind a powerful attack and solid goaltending by Lapadula, the Rams closed out the game, by far their strongest performance in recent memory.

With the victory, Ryerson improved to 4-4-2 on the season and the team now sits in fifth place in the OUA East division.

The Rams also moved five points ahead of Carleton in the standings, a major boon as the two teams will likely be battling for playoff position as the season winds down.

“We knew how important today was as Carleton was one point behind us in the standings and if we allowed them to take the win today it would flip the table,” associate coach Tina Cook said after the match.

UP Next: The Ryerson Rams will return to action next weekend as they head to Kingston for two matches. First, they will take on the Queen’s University Gaels at Richardson Stadium on Sept. 30. The following day, Ryerson will go toe-to-toe with the Royal Military College Paladins, the OUA East’s only winless team.