Posed between two microphones, four comedians took to the stage at the Ram in the Rye late Thursday night to tackle racist stereotypes and ignite contagious laughter.

As the closing event for DisOrientation—a week long event hosted by the RSU to highlight prominent social issues—Shade, Varsity Edition was created and produced by former Ryerson student Anasimone George as her way of pushing boundaries and creating a platform for comedians of marginalized groups.

George began Shade, Varsity Edition on Jan. 12, 2017 in hopes of promoting comics of colour and comics in the LGBTQ+ community in a field where “they don’t get a lot of say, so people don’t know that their comedic material exists.”

“I wanted to make a space that included all of us and a space where good comedy could be produced.” George said. “When you make fun of pain, it makes it easier to digest. People are hungry for diversity, and we’re happy to give it to them.”

Most of the comedic acts throughout the night included content involving racial stereotypes and jokes that subtly combated racial issues under the veil of light-hearted comedy. 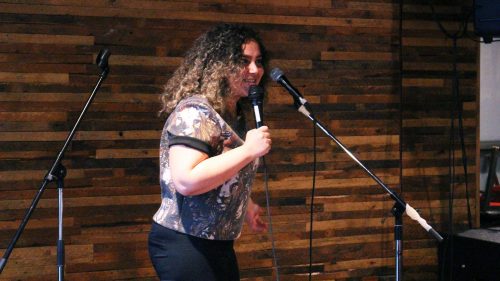 Anasimone George, creator of the event, took to the stage with her own comedic act

Comedian Hoodo Hersi, halfway through her act, began to playfully poke fun at some common stereotypes. “I feel like sunburns are nature’s way of telling white people that you’re immigrants too,” Hersi said. “Like, go back to where you came from—England is cloudy for a reason.”

The third act of the night, performed by Salma Hindy, got a rise out of the audience as she told many personal stories about her experiences as a visible minority. One story included her experience of breaking her nose when she missed her bed when attempting to lie down.

“The medical team that was looking at me was whispering to each other like, ‘So…do we call the cultural barbarics hotline now or..?’” Hindy said in her act. “As visible minorities, we have to deal with these kinds of stereotypes our entire lives.”

Despite race sometimes being a touchy topic, the audience was lively and animated through the duration of the performance, absorbing the relatable, sharp, and sometimes explicit material with warm laughter.

“Racism traumatizes us. It weighs us down. For us to be able to joke about that, we take back some power,” said fifth-year student Vajdaan Tanveer. “It’s saying we’re not going to let racism get us down.”

As the night came to an end, the crowd began to filter out in noisy, excited chatter.

“I think jokes about race might make people uncomfortable sometimes,” Tanveer commented as the Ram quieted down. “And I want that. Discomfort is the root of change, it gets us thinking about why people might do or say these [racist] things, and then maybe realize how wrong it is and begin to change things.”