Last season, Ryerson’s men’s hockey team looked to be on the verge of unprecedented success.

The Rams finished with a 22-6 record to lead the division with 46 points. Forward Aaron Armstrong led Ontario University Athletics (OUA) with 29 assists and 46 points in the regular season. Defenceman Alex Basso, this year’s team captain, was named an OUA first-team all-star after netting 18 points in 20 games.

But the Rams quickly learned that stellar regular season performances can be wiped away in an instant when the team was swept by Windsor—a team five seeds beneath them—in the divisional semifinal series.

“It was obviously such a frustrating way to lose after having such an outstanding regular season,” Ryerson assistant captain Lucas Froese said a few weeks before the start of the 2017-2018 season.

During the regular season, the Rams beat Windsor with relative ease, outscoring them 13-3 in two matchups. But once the playoffs started, that dominance became a distant memory.

It’s hard to pinpoint exactly where the Rams went wrong, but newly minted team captain Alex Basso thinks the team might have been too confident in their formidable skill, and not hardworking enough to earn success when it mattered most down the stretch.

“I think [last year] we had a lot of talent, which sometimes isn’t a good thing… You can get a lot of difficulty working as a team because when there’s so much talent there’s a lot of guys who aren’t sure of what their role is,” the 24-year-old captain said.

This year, to stave off a similarly disappointing postseason exit, Basso said the Rams will look to establish each player’s role, with Froese, Basso and Armstrong leading the team by example.

In a three-game series, Basso says goaltending is key to make it past the second round this year, but there’s more to it than just that if the Rams want to win their first OUA Queen’s Cup in program history and qualify for nationals.

“In the end, it’s all about hard work. You see a lot of good teams fall short because they don’t want to put in the effort and the teams with less talent win in the end because they just seem to mesh and there’s a lot of positivity and hard work,” he said.

This season, the team expects nothing short of making it past the second round of the playoffs. A commitment to defence, blocking shots, zero undisciplined penalties and executing on the powerplay and penalty kill are the small areas that will ultimately win hockey games, head coach Johnny Duco said.

An even greater commitment to conditioning was something the Rams fell short on last year, partially due to an academic policy within the team. Players who fell within a certain threshold had playing time during games and practices reduced. As a result, the Rams had lots of players bouncing in and out of the lineup.

“Our premium on fitness kind of went away because we were trying to preserve our players, and come playoff time, I felt that we may have lost a bit of that step,” said Duco.

This year’s recruiting class of 10 new players is talented and skilled to say the least. David Miller had a career-high 22 goals and 37 points in his final Ontario Hockey League (OHL) season; Steven Harland put up 105 points in 121 OHL regular season games; and Kyle Tibbo was named player of the year in the Maritime Junior Hockey League last year.

“We have outstanding individuals… the players are buying into some of the team culture that we have set and we’re getting a lot more buy-in than I’ve seen in the past. I think that will hopefully translate to some future success,” said Froese, who has his eyes on an OUA championship ahead of his final season.

While Ryerson consistently attracts top talent from Ontario and Eastern Canada, they’ve left the west untapped, which is a major reason why the arrival of Cavin Leth, a former Western Hockey League (WHL) standout, has Duco excited for the season to start.

“I’ve been really impressed with [him]. He gives us an unbelievable skill set, great leadership, and he’s a hard-working kid… the fact that he’s not an Ontario kid, that has given us a bit of a different look and I like that,” said Duco.

Leth said the WHL taught him a more physical game where he uses his body to create havoc on the ice. While the WHL experience could provide some edge for the Rams, the youngster still has areas of his game that he’s looking to hone in the OUA.

“Something I want to improve is my face-off and my defensive game. You can never be too defensive. It’s a good attribute to include in your game,” the 21-year-old rookie said. 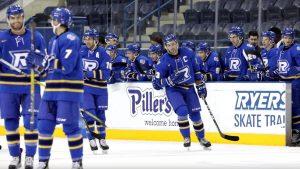 This year, Armstrong is focused on ensuring the team doesn’t cut corners and works hard every day. Beyond bringing high-energy to the ice, the 25-year-old veteran is looking forward to standing alongside the younger guys on the team.

“You have to put more of a focus on trying to show them some tips here and there and when they come to you with questions and concerns they have… it’s just trying to help them along the way with that,” he said.

An emphasis on team camaraderie and unity is intact with the leadership and veteran presence on this team. Duco said when the team “stays within [themselves],” they have seen a lot of success in the past.

Basso’s experience with Team Canada at the International University Sports Federation Games and having to create a bond with teammates over the course of only a few weeks has given him some ideas of how to bring the Rams closer together come playoff time.

“I got a lot of team bonding things in mind that we did for [Team Canada] that I can eventually bring to the table in the playoffs to kind of bring everybody a little closer together… It’s about focusing on one particular thing as a team and working toward that,” said Basso.

The combination of veteran presence and eager rookie players might give Ryerson—a team in need of redeeming itself from last season—the edge they need to live up to expectations this time around.

On Oct. 12, the Rams will open their regular season in Guelph, facing the Gryphons at 7:30 p.m. Their first home game is the following Sunday.