The Ryerson men’s basketball program didn’t have to look far to find the newest member of its coaching staff.

Less than a year after winning the first national silver medal in program history, Juwon Grannum, a former forward and co-captain for the Rams, is Ryerson’s newest assistant coach.

“It was never my intention to be on the staff, but… I’m just so close knit with all the guys on the team that it only seemed right,” said the 24-year-old Grannum.

Grannum played the five-year maximum amount of seasons allowed in U Sports. Despite being in his fourth year of his business degree, Grannum is no longer eligible to play for the Rams.

The basketball aficionado couldn’t quite walk away from the team or the game just yet. He originally thought of being around practices and helping out with general tasks, but during the summer, Rams head coach Roy Rana suggested his former captain join his staff while completing his degree.

“I was like, ‘Sure, why not?’” said Grannum, who always thought of getting into coaching, but never thought it would happen so soon.

Grannum thinks coaching is a great way to stay involved in the sport. His father, Fred Grannum, currently coaches with Ontario Basketball and was head coach of the U15 Ontario team that won gold this summer at the Canada Basketball national championships.

Grannum describes his role as an assistant coach for the Rams as the “liaison from the team to [Rana].” In addition to working closely with players—specifically with the Rams’ post players— Grannum is focused on player development, community work and helping players academically.

“He’s going to help us in so many different ways. He’ll certainly help us technically on the court, but also in many other larger ways off the court,” Rana said.

Beyond that, it’s about sharing his knowledge and being a leader. With five years of experience with the program, Grannum knows a lot about the team and said he wants to share what he’s learned over the years.

“It’s [about] anyway I can help the guys, whether it’s showing them how to do something or giving them tips—anything like that,” said Grannum, who has the most player wins in program history. He also averaged 10.4 points and 4.8 rebounds per game last season.

The transition from player to assistant coach hasn’t been difficult for Grannum. He was a captain of the team in his final year as a player and has naturally adapted to the role of a leader without a jersey.

“It’s really no different than when I was playing because I was already [taking a leadership role]. Now it’s just coming from a familiar voice, but I just have a different title to my name,” Grannum said. 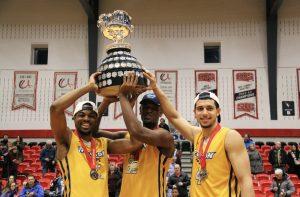 Rana describes Grannum as someone who has “a keen eye for the game,” but beyond that, his leadership abilities involve more than just his basketball IQ. Second-year player Warsame Mohamed, who has been working closely with Grannum to develop his game, can attest to that as well.

“I learned from Juwon that whether you’re having a good game or a bad game, communication is the number one thing that can keep you at a great space in the game,” said Mohamed.

Mohamed was happy to hear Grannum was coming back because if there’s one person who understands basketball at Ryerson, it’s Grannum.

Some people still think Grannum is a Rams player, and he may need some time getting used to his new title as a coach, too.

“Some of the first-years we got are like, ‘Coach! Coach!’ and I’m like, ‘Oh, you’re talking to me?’” Grannum said. He’d rather they not call him by that name.

“He’s the same guy. He’s just doing it in a different way,” said Rana. “He has to contribute in ways when he’s not on the court playing with us. He has to bring his energy off the court, on the bench and in practice, and just share his knowledge and experiences.”

Grannum is excited to give support to the team this season and to continue contributing to Rams basketball.

“I believe this group truly has a great opportunity to be playing for gold come March, so I think it’s going to be really special,” he said.