Many would agree laundry is one of the most boring domestic tasks. Mani Jassal believes otherwise. 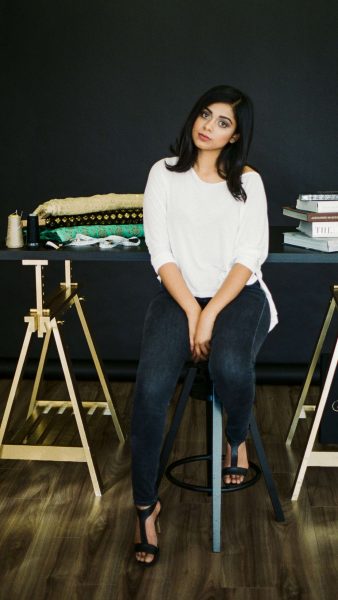 Mani Jassal in her element.

“It seems funny but I saw all the colours mixing in the wash and was inspired to create my [Alamārī] collection,” recalls Jassal, who doesn’t like to force the design process, but lets inspiration come to her.

The popular collection, full of unlikely colour and pattern combinations, speaks to her South Asian roots while presenting sexy and rebellious bridal and evening wear. Alamārī bears its name from the Punjabi term for ‘closet’ and is derived from wanting to create non-traditional looks. Her work, which has appeared on the BET and Emmy red carpets, has also been pulled by Beyonce, Kendall and Kylie Jenner—a dream for most young designers.

Yet, when Jassal began studying fashion at Ryerson in 2009, she knew it was a shot in the dark—could she really make a living as a fashion designer? Was her “passion for fashion” simply just a passion? She was good at math and science and considered studying aerospace engineering, a career that was deemed much more stable by her parents. But when she was accepted to the Ryerson School of Fashion, Jassal was ecstatic. She knew she had to follow her heart.

Four years down the road, Jassal attributes a copy of Vogue India as an influence in the development of her personal style; she saw the craftsmanship that went into the garments. Because of that, Jassal experimented with non-traditional bridal wear for her collection at Mass Exodus in 2013, citing Toronto and hip-hop culture as inspiration. When her parents saw she was thriving in a field she loved, they came around.

It hasn’t always been easy for Jassal. Like many working in the creative industries, she struggled to find a job when she graduated. “I tried applying to brands like Joe Fresh, but I could only find design jobs in New York and London, which were unpaid internships…it’s just not practical at all.” She worked retail at Burberry, but after spending four years studying design, she realized she wanted something more than setting up fitting rooms and standing behind a counter taking people’s money.

Cue the rise of her label, Mani Jassal, which was developed from her Canadian-Indian background. “It started when I was asked to make a prom dress for someone, then someone asked me to make a gown for a wedding…it just grew from there.”

When asked about her biggest challenge, she notes it’s finding where she fits in. “I’m a Canadian-Indian, but I feel like the fashion industries in both countries don’t accept me completely.” In the Canadian design industry, she says she’s seen as “too ethnic” and presented as a designer for Indian women only. In the Indian design industry, she’s too Canadian.

Jassal considers her greatest achievement as “doing what she loves to do and succeeding at it.” In the future, she hopes to show four collections a year, have stores in major cities, publish her work in Vogue magazine and have celebrities wearing her creations.

Jassal’s advice to young designers is to “stick to your style, find your aesthetic and don’t be afraid to be unique.”

It certainly paid off for her.