The Ryerson Rams came close but fell just short in their home opener against the Brock Badgers, losing by a score of 80-75 in overtime at Coca-Cola Court.

With the loss, the Rams slide to a 2-2 record, taking them to ninth overall in Ontario University Athletics (OUA) and sixth in the OUA East division. Meanwhile, the Badgers keep their undefeated season alive— maintaining their spot at the top of the standings with a perfect 5-0 record.

The Rams received a strong outing from fourth-year forward JV Mukama, who led his team with a career-high 23 points on 7-19 shooting from the field along with a game-high 13 rebounds. But it wasn’t enough for Ryerson to secure a win on the night they unveiled their 2016-17 OUA championship banner.

Despite a slow-scoring first half which ended with Ryerson up 36-35, the matchup quickly turned into a game of momentum swings and shot-making. Both teams had their fair share of positive moments during the contest, making clutch buckets when it mattered most.

For the Rams, it was guard Myles Charvis who did most of the damage during the late stages of the game. With his team down 67-62 with under three minutes remaining, the crafty scorer took over—dropping six of his 18 points in the last four minutes of the fourth quarter to tie the game up for his team with just 2:45 minutes remaining.

A series of scoring opportunities arose for both squads, but no one would score for the rest of regulation, leading to overtime.

Despite another slow start, the Badgers eventually made the baskets they needed late in the extra frame. Third-year forward Cassidy Ryan went on a personal 6-0 run to give Brock a six-point cushion and to ice the Rams.

Wednesday’s result is the second consecutive overtime loss for the Rams, after they fell to the Western Mustangs 62-59 on Nov. 4. 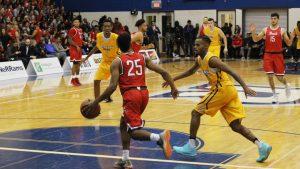 Despite their physical style of defence, the Rams weren’t able to prevent the Badgers from gaining high-scoring opportunities, allowing the road team to knock down 46.2 per cent of their shots throughout the extra frame.

The Badgers took a page out of the Rams’ book, utilizing a stiff defensive approach that limited the Ryerson’s high-speed offence to 35.3 per cent shooting as a unit, to go along with 23 turnovers.

On the bright side, the Rams did receive position outings from Mukama and Charvis. Tanor Ngom, Roshane Roberts and Filip Vujadinovic were also bright spots for Ryerson— combining for 26 points on 9-22 FG and 12 rebounds.

Up Next: Knowing that they were only a few shots away from winning this one, the Rams will definitely look to make their presence felt in their next game. The Rams will look to move past the loss to Brock when they take on the on the McMaster Marauders (1-2)  at Coca-Cola Court on Friday. Tip-off is set for 8 p.m.