A good ol’ motivational halftime speech by interim head coach Borko Popic was a key reason the Ryerson Rams ended up defeating the Wilfrid Laurier Golden Hawks by a score of 80-70 on Saturday night, according to Ryerson guard Myles Charvis.

“To be honest [the speech] really got us going,” said Charvis. “[Popic] just said ‘Let it be known that we’re a team that needs to play like we are a top team in this league and we need to trust each other and just hone in on defence,’” the star guard said.

While Charvis scored 17 of his 19 points in the first half alone to push them to 41-38 lead, the rest of the team wasn’t playing at the tempo they wanted. Laurier’s defence was of an “in-your-face” style, creating havoc in the paint. Ryerson looked rattled, and frequently throughout the first half, Popic had to tell his team to “calm down.”

But coming out of the gate in the second half, the Rams finally hit their next gear en route to their sixth win of the season. At 6-2 Ryerson now sits tied with the University of Ottawa for third in the Ontario University Athletics East, behind the 6-1 Laurentian Voyageurs and the 8-0 Carleton Ravens. 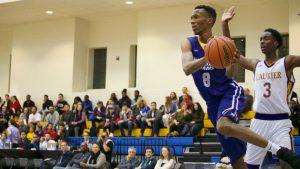 “We really took onus on that and we just wanted to perform in the second half, and I think we did a good job,” Charvis said.

As the third quarter went on, the two teams traded nine and 11 point runs, respectively, but no matter the margin of the lead, it was apparent Ryerson had gotten their mojo back.

“I thought the guys came out [after halftime] focused and locked in— I mean, Laurier is a good team,” said Popic. “They score the ball really well but I thought in the third quarter we kinda had another level of intensity, and yeah, we came out firing.”

The shots started falling in the second half, as Ryerson shot an impressive 40.5 per cent from beyond the arc, with guard Manny Diressa leading the way as he went 2-3 from the three-point line. Diressa finished the night with 24 points, seven rebounds and seven assists.

“I thought we were moving the ball a lot,” said Diressa. “People were passing and giving extra passes and giving up open shots for even better shots.”

Even with Rams’ head coach Roy Rana on temporary leave, there’s no lack of unity amongst this Rams squad, Popic said.

“The process and the culture doesn’t change when coach Rana isn’t here,” said Popic. “That’s a testament to (the players) and the entire staff.”

But Popic said Rana is set to return to the Rams’ bench Wednesday, as Ryerson takes on the University of Toronto Varsity Blues.

“We play U of T next on Wednesday, we’ll see the [scouting report] that the coaches give us and prepare, take a day of rest, and then get at it for practice Monday,” said Diressa.

Up Next: The Rams take on the Varsity Blues on Nov. 29, at UofT’s Goldring Centre. Tip-off is set for 8 p.m.