Sofia Paska dominated in the post for Ryerson Friday night

After a bombastic win in their home opener against the Brock Badgers on Wednesday, the Ryerson Rams defeated the McMaster Marauders 83-71 Friday night to improve to 3-2 on the 2017 season.

The Rams came out of the locker room firing on offence, leading the Marauders 19-15 in the first quarter. A weak three-point showing stifled McMaster early on, as several wide-open threes were missed in a quarter where the team had 10 solid looks from beyond the arc.

McMaster eventually got their act together and tied the game up at the end of the first half 34-34, all while still shooting an abysmal 14 per cent from deep in the second quarter.

In the 3rd, both teams cracked 20 points for the first time in the game, but McMaster held the edge thanks in no small part to Hilary Hanaka and her 12 points in the quarter. The Marauders led 57-54 going into the 4th.

Ryerson was determined to not finish behind, holding the Marauders to only 14 points while scoring 29 of their own in the final stanza. Ryerson guard Cara Tiemens’ defensive prowess was essential in closing out the Marauders down the stretch. Tiemens collected five steals by the time the game ended. 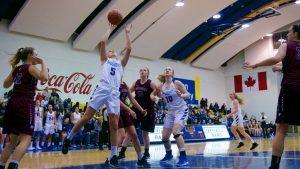 To Rams forward Sofia Paska, Tiemens was essential in swinging the game in Ryerson’s favour.

“I think Cara did a great job on defence, like she was really bringing a lot of ball pressure getting on the floor so I think our defensive momentum just switched and they couldn’t really get any shots up,” Paska said.

Paska led the offensive charge for the Rams, finishing with the game’s only double-double—sporting 18 points and 10 rebounds—while also leading Ryerson in minutes played.

Ryerson now sits in third place in the OUA East, while McMaster drops to 2-2 and fifth in the OUA West.

Up Next: The Rams next matchup is on November 15 in Guelph against the Gryphons. The Gryphons are currently 2-3 after winning their last two games in a row.