The last time the Ryerson Rams and the Waterloo Warriors met, the two teams played a close game that ended in a 3-2 overtime win for Ryerson. In their second meeting of the season on Wednesday, it proved to be a more high-scoring affair.

Though they were outshot 41-27, the Rams defeated the Warriors 6-4 at the Mattamy Athletic Centre to improve their record to 8-3-0, good enough for second place in the Ontario University Athletics (OUA) West.

Ryerson rookie forwards Kyle Tibbo and Mitchell Skapski were instrumental in the win. Tibbo and Skapski finished the night with a goal and an assist each, each netting their first-ever OUA markers.

Tibbo was relieved to get the monkey off his back. “I had the chances all year but couldn’t get the right bounces,” he said. “It’s definitely a weight off my shoulder.”

Ryerson assistant coach Nathaniel Brooks was pleased with his rookies’ contributions.“As a team with a lot of first year guys, we’re learning along the way,” he said. “We’ve been able to pull out of tight games as we did tonight, so I’m overall happy with the win.”

The Rams looked great to start the game, pouncing on the Warriors early with a goal from forward Devon Paliani that beat Waterloo goalie Trevor Martin a little over two minutes into the first period.

About four minutes later, Ryerson scored again after a great Skapski pass behind the net set up Tibbo.

Shortly after a Rams power play that led to a few shorthanded chances for Waterloo, the Warriors got on the board after Zac Coulter tipped in a Michael Siddall shot from the point to beat Rams goalie Taylor Dupuis and cut the deficit to one heading into the intermission.

A little over a minute into the second period, the Rams struck again as John Carpino jammed home a loose puck past Martin. Nearly three minutes later, the Rams added another goal by Jared Walsh from a great backhand pass from Tre Folkes to make it 4-1.

Midway through the middle period, the Warriors scored two quick goals 19 seconds apart to cut the deficit to one.

The Rams defence wasn’t at their best during this game, and it’s something Brooks said the team will look to improve moving forward. 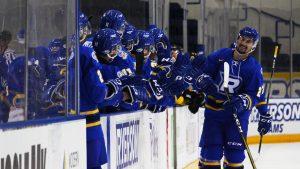 Toward the end of the period, the Rams had separate 5-on-3 power play chances. On the second one, Ryerson captain Alex Basso scored to put the Rams up 5-3.

In the third, the Warriors came out flying. Dupuis remained steady, stopping a flurry of shots from Waterloo.

With roughly two and half minutes remaining, the Warriors pulled within a goal after Joey Champigny tipped in a shot from the point. The Warriors tried their best to tie the game late, but the Rams sealed the victory with an empty net goal by Paliani in the last second to make it 6-4.

Ryerson’s now won five of their last seven games. Brooks said he feels great that the team is off to a good start to this season.

“We’re extremely happy about it,” he said. “We just got to continue because it’s a long way to go.”

Up Next: The Rams will look to continue their winning ways when they head to Windsor to take on the Lancers at South Windsor Arena Friday. Puck drop is scheduled for 7:30 p.m.