The Rams show off their newest hardware

“It’s bitter, not bittersweet. It’s just bitter,” said Ryerson captain Kyle Stewart with a provincial bronze medal hanging around his neck. “I’ll be 100 per cent honest with you: We did everything we could.”

Stewart, at the end of his ﬁfth and ﬁnal Ontario University Athletics (OUA) Final Four, couldn’t help but think of what could have been for himself and the Rams men’s soccer team.

They beat McMaster to capture bronze, their second best ﬁnish in program history, but their loss to York the day before in the semiﬁnals was still on their mind, and for good reason.

“It’s nice to get the bronze, but we were all disappointed after the result yesterday,” said fifth-year forward Nick Lambis. “But it shows the character of this team to come back today and play hard to get bronze. At least we have something, something to look back on for this year.”

Against McMaster, the Rams were determined to finish their season with some hardware, even though they failed to reach the national tournament in British Columbia.

Arya Hemati opened the scoring in the 11th minute off a free kick. Then, Lambis soon followed with an insurance goal almost four minutes later, after the Rams were able to pull Marauders goaltender Jesse Di Domenico away from his net. It left a wide-open target for Lambis, who capitalized to put Ryerson up 2-0.

McMaster responded by upping their pressure, but a dirty tackle by Yunus Mollayev to the shins of Ryerson’s Mohamad Abdallah would result in a red card. It would leave the Lions one man short for the rest of the match.

The Rams defence held their own, able to manage the pace with their two-goal lead, holding off the Marauders, who finished second in the OUA West during the regular season. McMaster continued to fight, but Ryerson’s Daniel Merean knocked in the team’s third goal of the day in the 90th minute to put the match fully out of reach.

“I knew this team would come out and bounce back, and have an edge on our shoulder,” said Rams head coach Filip Prostran. “That’s exactly what they did. They did what they did all year: play strong defensively, took our chances and that was it.” 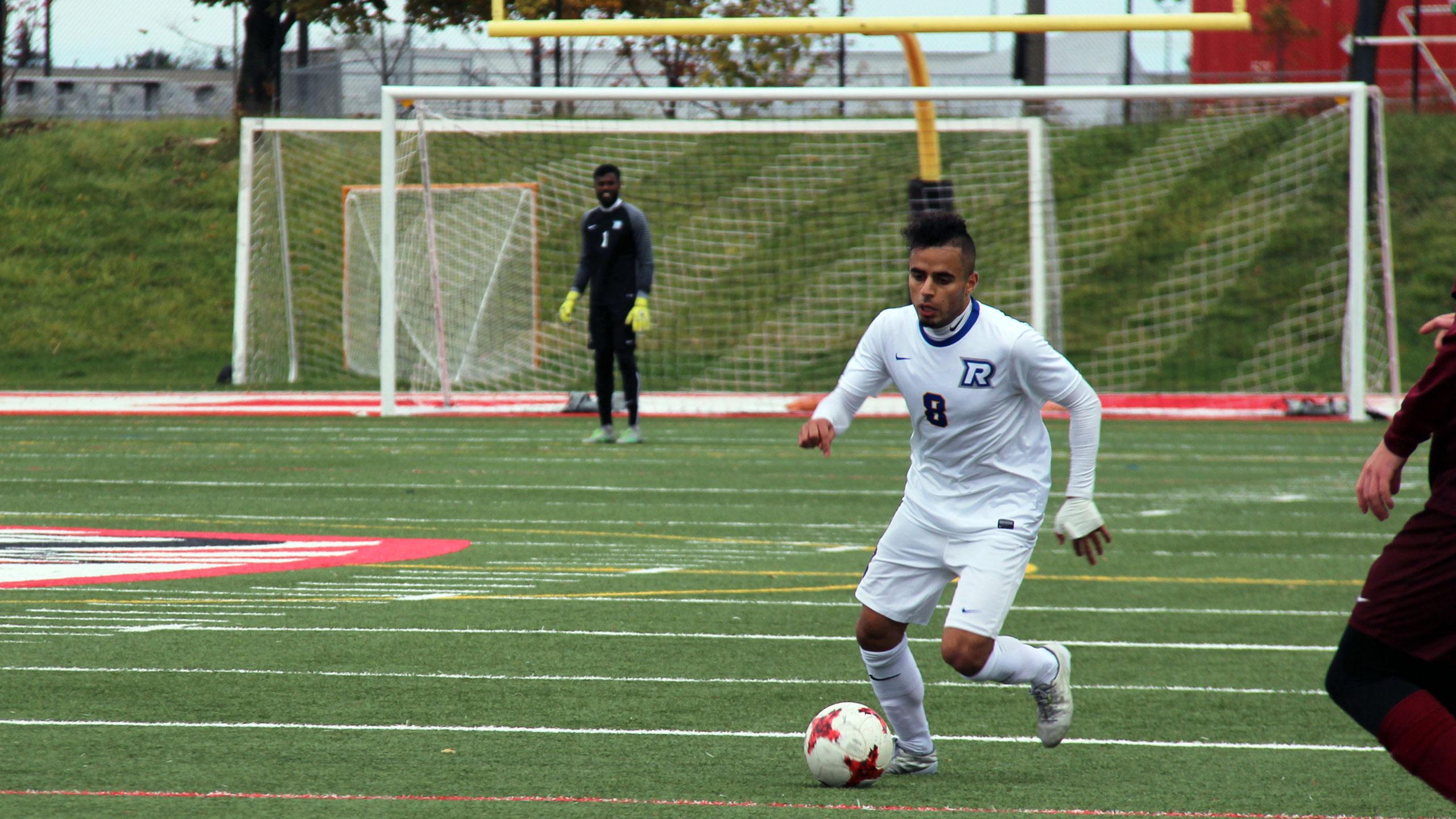 The Rams were able to secure bronze with a 3-0 win, their second best finish in program history behind a silver medal in 2013, which booked their most recent national tournament appearance.

Against York, a day before their match versus McMaster, Ryerson watched their dream slip away as they tried to return amongst the nation’s best. They were up 1-0 against the Lions, who’ve won four of the past ﬁve OUA titles.

“There was only 30 seconds left till we booked our ﬂight to British Columbia,” said midﬁelder Abdallah El-Chanti. In stoppage time, the Lions made one last push in the match’s dying seconds, tying the game after the Rams had controlled a single-goal lead since the 23rd minute.

No one else scored until the teams entered a penalty shootout, which the Rams lost 5-4 in heartbreaking fashion.

“During the York game, there were moments where we were like, ‘God, this is what we’ve been waiting for, we fought so hard all season,’” said El-Chanti. “It was honestly too good to be true.”

In September, it didn’t look like Ryerson was even going to make the playoffs. They had to retroactively forfeit their ﬁrst six games after ﬁelding an academically ineligible player.

They went from ﬁrst in the OUA West to eighth. They needed to ﬁnish at least fourth to make the playoffs. It was a crushing blow, with the team looking to redeem themselves after an early 2016 playoff exit following their best regular season in program history.

Upon announcing the deﬂating news, Ryerson athletic director Ivan Joseph said, “Maybe in two months I look at this as perhaps the start of what could be a really great story.”

The Rams went on to prove Joseph right, winning nine of their next 10 games, to go along with a tie, propelling them to a third seed ﬁnish by the end of the season.

Without the forfeitures, the Rams wouldn’t have lost a single regular season game. “A lot of people didn’t believe in us at ﬁrst,” said Stewart. The Rams carried that chip on their shoulders into the playoffs.

By the time they reached the quarterﬁnals, they were up against the University of Toronto Varsity Blues, the same team that had beaten them three straight times in the OUA bronze medal match. The Rams came away with a win in a penalty shootout, and it looked like they were ﬁnally over the hump until the ﬁnal 30 seconds of the match against York.

“We deﬁnitely deserved a gold medal,” El-Chanti said. “Our goal is nationals next year, 100 per cent. All offseason we’re going to work hard and come back stronger. Teams will be scared to play us, I promise you.”