Ryerson’s EcoStudio and the Endeavour Centre, a Peterborough-based design firm, have collaborated on a green building project, designing a rental unit that uses sustainable energy for power.

The ZeroHouse is a townhouse prototype based on the concept of net-zero energy.

The net-zero building philosophy is to provide housing space that offsets its energy consumption with the amount of renewable energy the home is able to produce.

To make this possible, the team set out to decrease energy consumption, carbon footprints and construction waste. 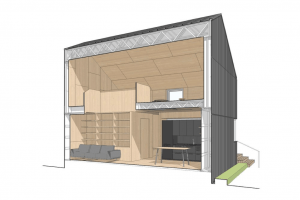 Cheryl Atkinson, the director of Ryerson’s EcoStudio said that her goal was to provide affordable family housing that was based on the net-zero philosophy. She took it a step further, wanting to

focus her efforts on how this concept could benefit an urban area.

“A target we had was to make it urban housing, rather than detached family housing. We thought it absolutely critical because most other competitions focused on net zero housing, treating it like single-family houses, free-standing, on large plots of land. It’s not a sustainable typology,” said Atkinson. “Given that we’re an urban university we wanted to work with a denser model.”

The final model is 1,000 sq. ft. and constructed with prefabricated materials, saving time in the erection of the site, as well as providing an energy-efficient solution to construction waste. The use of these materials also makes the house more affordable for consumers.

“A normal house is built of individual pieces of lumber, and carpenters gather and frame it up from scratch, layer over insulation and wiring, and it’s an additive process of small pieces,” Atkinson said.

“What we did, in this case, was design the project so it could be constructed very quickly out of very large panels. More like building a large version of a cardboard model of a house.”

The entire assembly of the house took only two weeks to complete.

Homebuilders are increasingly focused on energy efficiency to add value to their properties and limit greenhouse gas emissions.

Chris Magwood, an instructor at the Endeavour Centre, says developers need to acknowledge carbon emissions as closely as they do energy efficiency, or there may be no emission reductions at all.

“While it makes sense to look at the energy efficiency of the building once it is built, if we don’t look at the carbon in the materials, it’s quite possible to build a very energy efficient house that’s responsible for so many carbon emissions in construction,” he said. “It won’t really save any emissions for 10 to 30, sometimes up to 60 years.” Applying this thought process led his team to use plant-based materials in construction, like hemp, straw and mushroom root.

“All of those materials are about half carbon by weight,” said Mag- wood. “So by putting them into the building where they’ll stay for 100 years we’re effectively taking that much carbon out of the atmosphere, and sequestering it into the building.”

Affordability in homebuilding is currently a contentious issue. Last month, the Ryerson City Building Institute reported that Toronto would need 8,000 new rental units per year in order to stop the city’s reliance on high-cost, high-carbon footprint condos in Toronto.

EcoStudio is hoping their production design helps to offset this number.

“After looking at the production costs for this building, we determined that it would be no more expensive to build a net-zero version than it would to build a custom single-family home of the same size,” said Atkinson.

“It was built by amateurs, it’s something that could be shipped off to different communities and people could build it themselves. It could solve a lot of problems.”