Ryerson’s Sofia Paska could not be stopped Saturday night.

Ryerson’s record now stands at 6-2 after reeling off four consecutive wins, and if Paska keeps playing like she did against Laurier, the Rams should continue to climb in the Ontario University Athletics (OUA) East standings.

But despite their fourth-year star’s career game, Ryerson’s performance was far from perfect against Laurier. The Rams shot poorly from three, connecting on only 3-11 attempts from beyond the arc, and turned the ball over 17 times, leading to 16 points for the Golden Hawks.

The Rams came into halftime with a comfortable 18-point lead, but soon, their faults came into focus and the Golden Hawks began to claw their way back into the contest. In the second half, Laurier managed to outscore Ryerson, but it wasn’t enough to erase the lead.

Ryerson guard Cara Tiemens and forward Katherine Follis were also instrumental in the win, chipping in with a combined 22 points on 9-21 shooting from the field. Like Paska, Tiemens and Follis are also in their fourth seasons as Rams, and against Laurier, their veteran savvy came in handy. 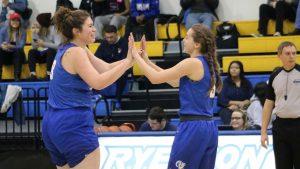 On the defensive end, Ryerson held the Golden Hawks to a cringe-worthy 18.2 per cent (4-22) outing from beyond the arc, which was essential in keeping their lead down the stretch. Before Saturday’s loss, Laurier had averaged 70 points per game this season.

Laurier’s Nicole Morrison, who came into the game as the second highest scorer in the OUA, had a characteristically strong night, putting up 22 points, eight rebounds and four assists. But in the end, it was Paska’s night to shine as Ryerson celebrated Pride Night, while she eclipsed her old career-high (28 points) that she set last season against York.

The two-time OUA first team all-star is now averaging 19.5 points per game, sitting right behind Morrison for second in the OUA. Paska’s enjoying her best season yet for Ryerson, and the Rams are hitting their stride just in time to take on the University of Toronto Varsity Blues, their crosstown rivals, on Wednesday night.

Up Next: The Rams will head on the road and take on the Toronto Varsity Blues at the Goldring Centre on Nov. 29. Tip-off is scheduled at 6:00 p.m.