It can take a whole day to get that perfect shot. The one that leaves your mouth watering while on the subway or while flipping through a magazine in a waiting room. Hours of preparation go into that photograph, but the shot itself is over in seconds.

The day starts with the prop stylist. After shopping for the best plates, linens, silverware and other accessories, the stylist goes into the studio and begins building the shot. Once the setting is prepared, the photographer goes in with stunt food—which can be anything from a brown paper bag to a plastic variation of the dish—and rehearses what the shot will look like. Different angles, lighting and poses are played out until everyone on set is satisfied.

Once the photographer is ready, the food stylist is given a cue to start cooking the“real” food. There is a picky process for cooking food specifically for photography in order to bring out all its texture and colour. Once it’s ready, the stylist replaces the stunt food, and the photographer only has a few seconds to take the shot before it wilts away. 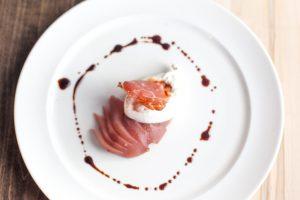 For something that takes hours to prepare, seconds to achieve, and costs hundreds, sometimes thousands, of dollars, food photography has grown to be a highly crafted art form in the food media industry. Ranging from corporate to editorial, the process and technique behind food photography is intense. As the competition in the food industry increases, so does food photography.

Rob Davidson has worked in the field of food photography for around 30 years since studying photography at Ryerson.

“In order to shoot food you really need to understand food,” Davidson says, who is now an instructor at Ryerson’s Chang School. In order to take the perfect photo, he has to bring out all the senses—texture, taste, smell and atmosphere—and craft the experience of eating.

Working alongside Davidson and most photographers is a stylist, who’s responsible for making the food appear as beautiful as possible for the photo.

Stylists use various techniques to prepare the food: This includes knowing how long it should be cooked to achieve the perfect shade or texture, how it should be plated and proper portion size.

“In order to shoot food you really need to understand food”

There are also many industry tricks to help the food look its best and survive longer shoots. According to Davidson, when shooting a turkey, food stylists won’t cook it all the way through in order to avoid wrinkling and shrinking. Instead, they’ll cook it in the oven until it starts browning, and add a browning agent. A popular choice is a sauce composed of caramel with vegetable flavourings. The turkey would then be topped off with a plumbing torch to leave the skin deliciously crispy. 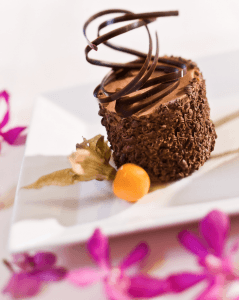 Other tricks include using a combination of animal lard and icing sugar to create unmeltable ice cream, or glue instead of milk. Stylists will do whatever it takes to make the photo look delectable, even if it means making the food inedible in the process.

Davidson says one struggle he faces is convincing his clients, who range from chefs, restaurateurs, or corporate brands, how vital stylists are.

In 2010, he was working with a client in Whistler, B.C. who was the chef and owner of a Korean restaurant. As the chef, he felt the need to cook himself and photograph them the way they’re served to customers. In order to prove his point that the meals should be prepared by his stylist, Davidson suggested they take two shots of the meal; one cooked by the chef and the other by the stylist. His dish of choice was a Korean seafood pancake, made with octopus, mussels, scallops and other types of seafood, fried in a crispy batter.

When the pancake was prepared by the chef, he was solely thinking about flavour and in the process, hid all of his ingredients in the batter, leaving the pancake looking flat and colourless. When the food stylist cooked the same recipe, they prepared it while thinking about appearance, and made sure the dish was as textured and colourful as possible with all the ingredients visible.

“We’re going to start preparing it that way in the restaurant,” said the chef to Davidson after seeing how well it came out in the photos.

Tracy Cox is a Toronto-based food photographer who works mostly for large corporate clients, such as Loblaws and Pusateri’s. She’s been in the industry for around eight years and works out of a high ceiling studio outside the Junction. With an array of lighting equipment, software and her towering black steel studio stand, Cox’s process is thorough and involves a great amount of technique. This includes never depending on natural light for a shoot.

“You can’t really say to your client, ‘Oh, it’s 4 o’clock, we have to shut it down now, we lost our light,’” she says. Cox usually sets up her studio the night before a shoot in order to save time and ensure the process is roughly ready for the next day, which is often chaotic, especially with bigger clients.

Other tricks include using a combination of animal lard and icing sugar to create unmeltable ice cream, or glue instead of milk

One of her most memorable shoots was with Pepsi in 2016. It involved 17 people, forcing Cox to rent another studio in order to avoid a cramped space. Food and prop stylists, art directors, corporate representatives, brand managers and assistants were all simultaneously working.

But not all food shoots involve dozens of assistants, brand managers and heavy equipment. Libby Roach, a former Ryerson student and food photographer, prefers to only use a tripod, white reflector and camera to keep the photos as natural aspossible.

On a Wednesday afternoon in early November, Roach had a shoot booked with Maiz, a Latin-American restaurant by Yonge  St. and Lawrence Ave. They initially met with the chef and social media manager who spoke on the restaurant’s history and their fusions of Peruvian, Mexican, Venezuelan and Latin American food. Roach then decided to set up the shoot right on the table they were sitting at because it was facing a window and got the best light.

She set up her tripod five-feet away from the table, facing away from the big window. One by one, dishes started being laid out in front of her. Colourful and fresh plates of guacamole, crispy arepas and tortilla soup were all moved around until Roach found the perfect layout. Simply for the aesthetic, the social media manager also brought out a beautifully decorated Michelada and a Maiz’s beer cocktail which is a frosted bottle of Corona tipped into a glass mixed with lime, chipotle chilli, sea salt and Tajin. Roach made sure to place it right by the window, making it glisten in the sunlight. 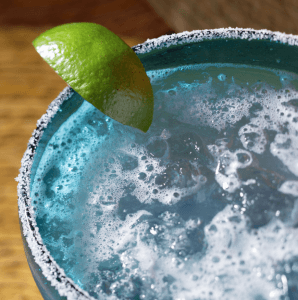 Mid-shot, the social media manager Alexis asked Roach why she enjoys food photography, and without missing a beat she said, “because food doesn’t talk back to you,” with a laugh. In fashion shoots, she later explained that you have to direct the model and convince them they look good. You have full control in a food shoot and can do whatever you think looks best, without the subject questioning you.

She was done half an hour later. Once she put her equipment away, Roach and her business partner Sonya smiled at one another and sat down to feast on the leftovers. When asked if they eat the food after every shoot, they laughed and said “everytime.”

For restaurant shoots, Roach is often more laid back with the process and likes the food to look as natural as possible.

“It’s a lot nicer to shoot something natural than make it look hairsprayed,” she said, but in shoots that involve hot or cold dishes that begin to lose their form over time, unconventional techniques are necessary.

Roach said that for hot dishes like soup or coffee, she boils a tampon in a kettle and lets it sink to the bottom of the cup or bowl, causing it to release steam for 20 minutes to half an hour.

Cox also brought up that when photographing frozen products, she is sometimes forced to embellish the product to make it sellable for the client.

For that reason, she doesn’t do a lot of food packaging shoots.

“I’ve opened up the package and it just looks like cat food or dog food,” she said. “There’s hardly anything there you’ve got to work with.”

In those kinds of scenarios, she’s sometimes told by the client to cut fresh fruit instead of using their frozen product, or she’ll look through multiple packages of the frozen dinners in order to find the most appealing pieces of food.

Roach said that while recently there’s been an over-saturation of ‘photographers’ on social media and popular sites like Narcity and BlogTO—where she got her start in 2011, the competition doesn’t bug her. She still manages to find work and focuses on her own craft and style, which she knows is of high quality.

Her passion for the beat dates back to her time at George Brown College and resonates through every photo she takes.