By Annie Arnone and Noushin Ziafati

The room rose to their feet as members of the Anishinaabe, and other Indigenous communities engaged the crowd in a drumming and singing ceremony, opening the 36th Canadian Federation of Students (CFS) National Annual General Meeting (AGM) in Gatineau, Que. The songs were incredibly welcoming; everyone in the room tapped the left side of their chests, patting their heart to mimic the beat of the honour song as directed by one of the performers. Never had we seen student politicians so unified.

Unfortunately, the feeling did not last long. 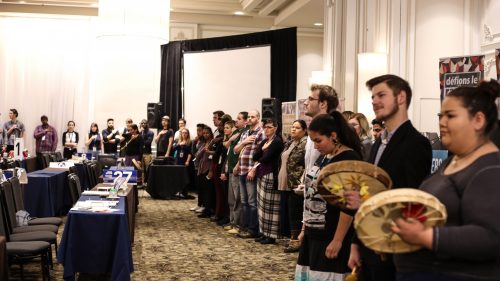 The CFS is the largest national student association in Canada, representing more than 650,000 college, undergraduate, graduate, part-time and international students. The Ryerson Students’ Union (RSU) has been a member of the CFS since 1982. This year, the RSU is paying a total membership fee of $536,000 to the CFS and CFS-Ontario, which goes towards funding campaigns intended to reduce and eliminate tuition fees, while fighting racism, ableism, colonialism and all other forms of oppression that act as barriers to success for students at Ryerson and across Canada.

Major decision-making by the CFS is made at annual national and provincial meetings. These meetings take place twice a year and allow students to examine and debate motions that centre around the policies, direction and priorities of the federation. Last year, it was discovered at the AGM that the CFS has a secret bank account, containing purchases that had little, to nothing to do with the Federation. This year the AGM ran from Nov. 17 to 20.

Motions were initially introduced at opening plenary, which took place on the first day of the AGM.

We immediately witnessed a clear split among undergraduate and graduate student unions represented by the federation, also known as member locals, including Local 24–our RSU. The RSU has been consisted of split slates in the past—but not like this. This year, the RSU is comprised of a president and vice-president equity, who ran on a pro-CFS slate called Elevate. The remainder of the RSU executives ran on an opposing slate, Spark, which was known to be anti-CFS, ultimately making this weekend, as well as the entire school year, all the more controversial due to conflicting points of view.

Member locals announced their presence at the opening plenary during a roll call—a form of taking attendance. Some did so in the form of song, others by way of chant. The RSU made sure to stand out. RSU vice-president student life & events Lauren Emberson raised her member local card and said “unfortunately, here,” leaving students in the room, including RSU president Susanne Nyaga, with a look of awe on their faces.

Sitting alongside Nyaga and Emberson was RSU vice-president operations Ali Yousaf and Board of Directors (BoD) Senate representative Razi Syed. Vice-president education Daniel Lis eventually joined for the closing plenary, but missing from the team was vice-president equity, Camryn Harlick. The RSU team was clearly divided by way of their split-slate nature–comprised of delegates who ran for the RSU elections on pro- and anti-CFS slates. This split was directly translated in their voting throughout the weekend, and lack thereof.

According to Nyaga, the best way to represent Ryerson students at the AGM was to abstain from voting if the table did not agree on a motion. Due to differing opinions among the group, the RSU abstained from several motions during the weekend—including the motion to release the full forensic audit of the CFS hidden bank account and the ruling of the chairperson for the entire AGM–does this sound familiar?

“The way we voted was essentially understanding that we’re all there to represent students and because the way in which the agenda was given to us, we didn’t have time to consult students on how they felt about particular motions,” said Nyaga.  “When we didn’t have consensus amongst each other, instead of privileging one voice over the other, we decided to abstain.”

This ideology to abstain, however, was not shared among the group, resulting in tension among RSU delegates. Emberson said that she thought it was “unreasonable to abstain,” adding that “there’s no way that every single person on the campus would mutually agree on everything.”

After the lengthy roll call process, everyone made their way to a short anti-oppression workshop, intended to outline a set of rules on how to behave in a civilised manner throughout the weekend.

As the room began to clear, we approached the only remaining RSU executive in the space, Yousaf, and briefly interviewed him–for about 3 minutes–about what occurred during roll call. As we wrapped up and turned off our recorder, we were approached by CFS national communications coordinator, Juhi Sohani, who immediately asked us to delete the file in front of her. We were told that the CFS does not allow any interviews to be conducted until closing plenary ended, on the last day.

We deleted the recording, although it was problematic not to be able to talk to the executives that represent our readership, whose membership fees to the RSU go towards paying half a million to be part of this federation. As the only media outlet present–from all across the country–as far as our empty media table illustrated, we couldn’t wrap our heads around why this was a problem.

Upon following up with Sohani, we were told that it was “just a rule.” 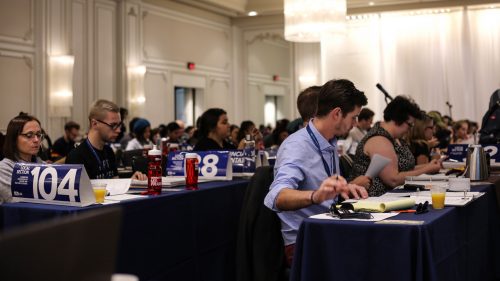 A motion that was heavily debated during the opening plenary was for the national executive to release the full, un-redacted forensic audit of the CFS secret bank account that was discovered in 2014 and discussed at last year’s AGM. Throughout the weekend, the national executive repeatedly mentioned that the full forensic audit of the bank account could not be released as it would put the federation in a position of legal liability. Their legal counsel also advised against it.

Yousaf said that the failing motion to see the full report was “really disappointing.”

“Not everyone, but [a] few of us, are asking for the full audit report that has not been provided for years,” he said.

Other delegates in the room, including those from B.C., mirrored Yousaf’s beliefs, while seemingly pro-CFS members on the opposing side agreed that the possibility of putting the CFS into legal harm was not worth the report.

The right side of the room we so happened to be placed in was filled with students making up the B.C. component, yelling and cheering as motions were struck down, or passed—we couldn’t deny that they were the outcasts in the room, given the multiple times that the national executive and B.C. delegates debated over defederation processes and accountability within the federation. Delegates from B.C. became so fed up with their treatment, that at one point a member addressed the room, condemning their behaviour and lack of inclusivity.

Another contentious motion surrounded Selkirk College Students’ Union, also from B.C., wanting to defederate from the CFS–in other words, wanting to disassociate with the federation.

But the national executive said that because Selkirk has not paid their membership fees to the national component they are unable to leave the CFS.

“If you want these spaces to be less toxic, then why don’t we let the people that have already voted on their campuses to leave, and then you can have your productive discussions,” she said.

Simka Marshall, chairperson of the British Columbia Federation of Students said the confrontations with B.C. was hard to deal with.

“Coming from B.C., it was a very frustrating meeting. There were a lot of comments that were made directly against British Columbia, by the leadership of this organization in these spaces, and there wasn’t any opportunity for British Columbia to respond,” Marshall said.

She added that this perpetuated a very “negative and sometimes hostile” environment for B.C. delegates, and that they did not feel welcome in the space. “We have some serious and legitimate concerns that we’ve been trying to address for two and a half, three years at this point…coming into these spaces and trying to have those conversations because we’re completely directed by our entire membership in British Columbia to be doing that, is really frustrating when it’s not being received.”

Within the question period on the last day, national treasurer Peyton Veitch addressed the estimated outstanding amount of membership dues that B.C. owes the CFS—totalling in $1.7 million. He added that the $1.7 million is being “held in trust” by the British Columbia Federation of Students (BCFS), and that there are member locals from B.C. who have remitted their fees. Oddly, this remark was not in response to a question regarding B.C., but one regarding the York Federation of Students’ debt.

Tracy Ho, relations and membership outreach coordinator of the Douglas Students’ Union, said that the confrontations with B.C. began way before closing plenary.

“The opening remarks began with the erosion of the students federation, basically it was blamed on B.C., that set the tone for the entire meeting, that allowed everyone else in the room to vilify and come after delegates from B.C.,” said Ho. “We have delegates that are brand new, coming here with an open mind….it’s shameful that the leadership of the organization encouraged this behaviour.

On the second and third days of the AGM, motions that were introduced during opening plenary were then discussed in closed door constituency group meetings, caucus meetings and subcommittee meetings—where suggestions are made for closing plenary, which followed the next day. The motions discussed in these meetings pertained to CFS campaign strategies, the release of the full forensic audit of the CFS hidden bank account and the budget of the federation, among other things. The idea behind these meetings is to allow delegates to discuss motions within smaller groups and for motions to be examined and discussed from a diversity of student perspectives, such as in the Racialised Students’ Constituency Group and the Queer Students’ Constituency Group.

Nyaga said that having to go through each motion individually in these closed door meetings allowed delegates to “more critically analyze” motions in-depth. She added that she enjoyed the Racialised Students’ Constituency Group meeting, as members were able to discuss inter-community issues between racialised communities, but also to discuss ways to move forward as allies and in solidarity with one another.

The closing plenary, which was as heated as the opening, saw the room divided. A series of motions for progressive campaigns passed, such as an anti-fascist motion to condemn the actions of University of Toronto professor Jordan Peterson and a “reconcili-action” campaign, pushing for reconciliation efforts at universities. However, the more contentious motions–such as the one pertaining to the CFS hidden bank account and defederation processes–that went through several rounds of debates, either did not pass or were pulled from the closing plenary agenda. This left a lot of things ultimately unresolved.

We watched as delegates asked questions to the national executive and did not receive answers, we witnessed delegates–who are the leaders on our campuses—take shots at one another for having opposed views, and hostile back-and-forths that dragged out discussions, but ultimately got nowhere. At the end, we left the AGM feeling disappointed, to say the least.

Tension persisted throughout the four-day-long meeting and from an outsider’s perspective it’s safe to say the overall feeling shared as a result of the meeting was bittersweet.