I hate Julie & Julia. Yes, I’m talking about the 2009 romantic comedy starring Meryl Streep and Amy Adams. The premise of the movie is that Adam’s character Julie, decides to cook every recipe from Julia Child’s cookbook “Mastering the Art of French Cooking.”

I hated it for several reasons. The plot is dumb (the main character’s life falls apart just because she cooks everyday), Streep’s acting is a joke and the food didn’t look that great. But I mostly hated it because it would never happen to me. My name is Premila. My name is so uncommon that everyday my phone autocorrects it to “Premolar”, so the chances that I’d find a cookbook, or anything else with my name on it, is pretty unlikely.

Apparently, I was wrong.

I found “Premila Lal’s Indian Recipes” while going through old cargo boxes my family forgot to unload when we immigrated to Canada. The boxes had been left untouched for eight years. My parents put a lot on the line when they decided to move to Canada and the first few months of our lives here were consumed by job searches and finances. They were so stressed out that we never completely unpacked.

It was a little book wrapped in yellowing cellophane paper. The cover had an illustration of an Indian woman serving food. It had the musty old book smell and had been cracked open so many times that it falls open flat in your palm if you let it. It was almost falling apart but I didn’t care. It had my stupid name on it.

Cooking is a way of communicating with their kids

I can’t find much about Premila Lal on the internet. The inside cover said she was a columnist for a couple of women’s magazines and one of India’s “leading writers on cookery.” It only takes a few sentences to figure out Lal isn’t kidding around about Indian cooking.

“This book has not been planned for the inexperienced cook,” she says right away in her introduction. It’s the kind of thing that would make you put the book away, but Lal explains why you shouldn’t.

“The art of cooking, like the art of loving, can be perfected only after a lot of practice and a lot of heartache.”

The book is divided by chapters—”Rice and Dhal”, “Fish, Chicken, Pickles”—each the base for a plethora of Indian dishes. Each chapter opens with some historical background on the dishes paired with a neat illustration. Lal explains in her introduction that she does this “to appreciate the art of Indian cooking truly and to eat in the spirit with which food is prepared in India, one must have some feeling for the people and their customs.” 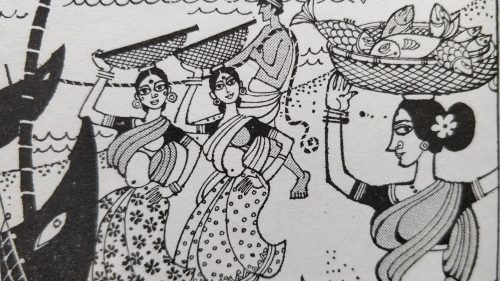 Wherever she is, Lal probably wouldn’t be pleased with the television ‘chefs’ who throw curry powder on some chicken and call it Indian food. But I can only speculate.

I decided I was going to have my own Julie & Julia moment. I mean, a less intense version. I tried to cook a Lal recipe every week that summer.

I decided my first recipe would be a simple chicken curry, chicken korma. The process went smoothly enough. I ground together ginger and garlic (ingredients so vital to Indian cooking that sometimes recipes don’t feel the need to mention it), sliced some onions and chillies (don’t rub your eyes at this part) and marinated the chicken with a spice mix stirred into yogurt.

My dad kept on checking in during the process. First, in confusion. It was a Friday night and his 19-year-old daughter was in the kitchen massaging chicken. I told him I just wanted to learn some new stuff. But then he kept coming back, pestering me about the details. My onions weren’t sliced evenly, the flame was too high and why was I using measuring spoons?

“You just need a teaspoon of that,” he said.

“Okay, a heaping teaspoon, or a regular teaspoon?”

“The teaspoon in the container.”

He was talking about the white, plastic spoon, snapped off on one end so it would fit into the old instant coffee bottle that had been repurposed to hold a load of spices. The spoons were from different takeout places, and they were all different sizes. Only my parents had figured out the conversion rates between them, but they wouldn’t let anyone in on the secret.

I threw away my measuring spoons because I wanted to be more authentic and went on with the recipe. I followed Lal’s recipe as closely as I could, even when my father popped in with alternative suggestions. After 45 minutes of chopping and marinating and stirring, I was done. It looked so good and smelled incredible.

But it tasted disgusting.

It was so bitter, I couldn’t get the taste of cumin or garlic or the subtle sourness of yogurt. It was just this bitterness that filled your nostrils and burned down your throat.

I flipped through the recipe to see if I had missed anything. I checked my spices, I went over the order I put everything together, I added salt. Nothing helped.

I gave in and called my father. He took a piece of bread, dipped it in and took a bite.
“Onions,” he said, barely two chews in.

What? No way. I added the onions. I spent 15 minutes slicing and grinding and crying over those goddamn onions. It couldn’t be the onions.

“Did you brown the onion paste before you added the chicken and yogurt?”

I hadn’t. Lal’s recipe just said to “add” it in. I told my dad this and he laughed.

“You always brown it, everyone knows that.”

Everyone. Not me, not the inexperienced cook who hadn’t had enough practice and heartache to know better. 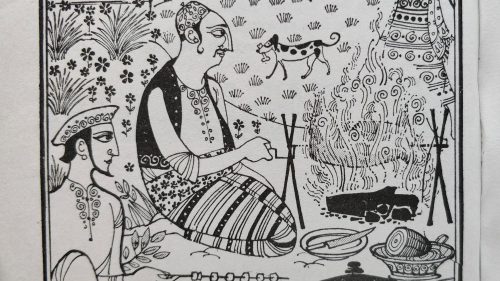 I hadn’t always felt so passionately about Indian food. In fact, for a few years of my life, I despised it. When I was a new immigrant, the chapatis and curries I was always so excited about were the same things that would mark me as “different.” I never said much as a new awkward kid in Canada but a lot of things would speak for me. My clothes were different, my hair was slicked back with coconut oil and I was transitioning out of an accent.

The worst of these little details that screamed “I’m a new immigrant” were my lunches. Indian food, for better or worse, smells strong. Those smells used to comfort me, but now they drew too much negative attention. The attention of young, mean kids with Wonder Bread sandwiches who didn’t understand dishes with more than six spices in it.

The tone of their “What’s that?” was never out of curiosity. It always came with the implication—”Why are you eating that disgusting and weird food?”

So I always hid my lunches, sometimes not opening my lunch because I didn’t want to deal with it. I also used to get angry at my mom. Why couldn’t she just pack me pizza pockets instead of pulao?

With time and maturity, my outlook change. I also just realized those kids were ignorant and Wonder Bread sandwiches are the saddest type of food. I grew more obsessed with holding onto my Indian identity. Immigrating here so young put me in a weird spot—I was so eager to assimilate as a young kid that I found it harder to relate to my Indian parents and the family I had back home over time. I became the “Canadian kid” they joked about—the kid in the family that couldn’t speak a lick of Hindi and said every Hindi word she knew with the wrong accent.

Over that summer I came home every week and picked a page from Lal’s book. I messed up a couple more times (“Coconut milk and coconut water are not the same thing,” Lal warned me). I wasn’t at my parents level, and I doubt I’ll ever be. But there was something about trying to cook like them that made me understand them more. And their parents before them.

My dad always talked fondly about his mother coming home after a long day running the bakery she owned and pulling together a prawn chilli fry that would satisfy her seven children. I never understood why that story mattered until I made my first prawn chilli fry. It’s tedious work. You have to devein and clean the shrimp, then dice onions, potatoes and chillies small enough that they’re visible but melt in your mouth. You have to stand there when you stir it all together, so that you cook the potatoes fork-tender but don’t overcook the shrimp. My grandmother did this in a tiny kitchen in India, sometimes without light, her small hands already aching from hours of kneading bread.

“The art of cooking, like the art of loving, can be perfected only after a lot of practice and a lot of heartache.”

Indian cooking is so much more than an extensive list of spices. It’s about family and love and it came out of a country that suffered decades of atrocities. Indians are particular about their food because we fought to hold on to it. And when you cook a chicken curry or palak paneer for someone, it’s because you’re fighting for them too.

Even after hours of working at their minimum wage jobs, my parents come home and make us Indian food, whether it was a simple dhal makhani (curried lentils with spices) or a green beef curry with spicy chapatis. Cooking is a way of communicating with their kids, who now speak with thick Canadians accents and can’t name a cricket player to save their lives.

My nights with “Premila Lal’s Indian Recipes” did more than help me put together a three course Indian feast. It taught me about history and the importance of holding onto the things that matter. My father hasn’t been home near his family in decades, but he’ll always have his mother’s prawn chilli fry recipe when he needs it, on the days where everything gets a little too intense. And I will always have this musty, little book written in 1974 for the days when I’m continents away and I need a taste of home. 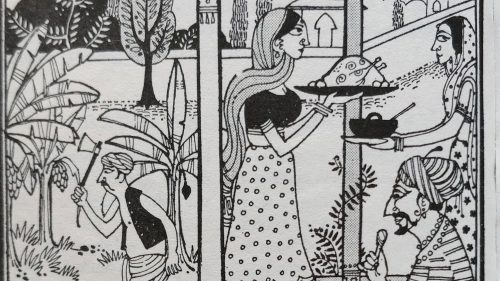