Even before the game began at Ryerson’s Coca-Cola Court on Friday night, it was clear from the Rams’ faces that the task they were about to take on—facing off against the Western Mustangs— was a daunting one. Ryerson’s men’s volleyball team was playing with only nine players on its roster, and of those nine, many had barely stepped on the court this season.

Eleven Ryerson players, along with coach Adam Simac, missed the game due to suspension. Andrea Elliott, a sports information specialist for the Rams, told The Eyeopener that the suspensions are effective between Jan. 10 and Jan. 24. “The only explanation I can give you at this time is that the suspended players were found to have violated the student-athlete code of conduct,” Elliott wrote in an email.

Without the 11 players and Simac available, the Rams were in tough, and it showed on the court: Ryerson opened the second half of the 2017-2018 season by dropping the match in straight sets, giving Western its fourth straight win, and they did it with less than half their roster in uniform.

Despite being short-handed, the nine Rams opened with a hard-fought first set, playing point-for-point with Western and eventually tying the score at 23. Soon, two unanswered kills by the Mustangs’ Bryn Ramsey led the visitors to an opening set win, and after that, Western took control. 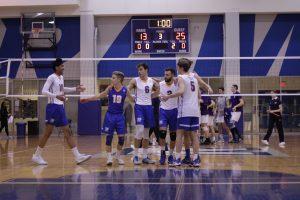 Collectively, Ryerson’s active roster had only played 13 games this season. Saying this roster was inexperienced would be a gross understatement, however some Rams rose to the occasion. In just his fourth game of the season, rookie Jordan Baric burst onto the court, leading the Rams with 9.5 points and nine kills, besting his career point total of 6.5.

The Rams were unable to emulate their success from the first set, losing 25-13 in the second and third, but the remainder of the game was filled with exciting rookie play. Zack Underhill, a second-year playing in just his third game as libero, totalled nine digs in the match and was constantly resurrecting play back to the Ryerson offence. 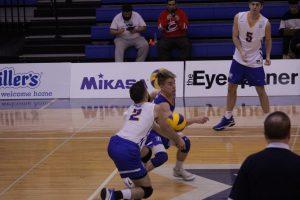 In the end, neither Underhill nor Baric could carry the team to victory. Despite the loss, the biggest takeaway from the match was the amount of skill Ryerson has to compete with in their young players, which will give Ryerson an edge over other teams in the OUA come playoff time.

With the loss, Ryerson has been bumped down to second in the OUA East, and with the straight-sets victory, Western shot up to second place in the west.

At the end of the match, Ryerson assistant coach Matt Harris declined to answer any questions posed by the media regarding the match or the suspensions.

UP NEXT: Ryerson can look forward to playing with a full roster and head coach Saturday night against the University of Toronto. The match begins at Coca-Cola Court at 8 p.m.