After The Eyeopener reported that the Ryerson Students’ Union (RSU) received mysterious packages from Amazon containing various electronics, including sex toys, four other student unions across Canada came to the RSU with similar stories.

Wiskar said the student union called Amazon multiple times and was told no information could be released and they “should just accept the packages.”

“The last call we made to Amazon was more fruitful. They said the purchases were all made with gift cards and the name on the orders was gibberish,” he said. “They said this happens quite often and that there was nothing to be done but for us to keep the packages.”

The sex toys and most of the electronics were then given away at a URSU holiday staff party. Wiskar said the remaining items—charging cables and iPad cases—are being used in the student union office. URSU still doesn’t know who the sender is.

“[Amazon] said this happens quite often and that there was nothing to be done but for us to keep the packages.”

“Our best guess is that we have been selected at random [since] Amazon has reported this happening to random individuals as well,” said Wiskar.

In Toronto, the RSU has received about 30 packages since September. However the student union wasn’t able to find out more information about the sender because Amazon told them releasing that information was a privacy concern. The Dalhousie and York University student unions are also on the list of student unions being bombarded with the mysterious packages. 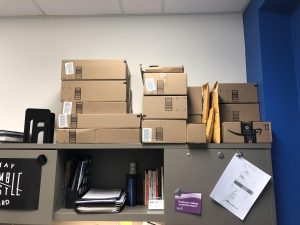 According to Amazon’s return policy on items a receiver didn’t purchase, they can return the package by using the order number that is usually on the box. However, if the item is purchased from a third-party seller, the original purchaser must be the one to return it.

The University of Manitoba Students’ Union (UMSU) is the latest student union to receive such packages.

“This is still a lot of money to be spent on an elaborate prank, if that’s what this is.”

“I have no idea who is sending this to us,” Nagra said. “We’ve only received two packages so far but this is still a lot of money to be spent on an elaborate prank, if that’s what this is.”

If more packages are sent, Nagra said she would call Amazon to try and find out information on the sender.