Ryerson’s men’s and women’s basketball teams both beat the Laurentian Voyageurs Saturday night to earn victories in their final regular season games before the playoffs begin.

The women won 83-74, and the men beat Laurentian 76-74 in a game that went right down to the wire. In both games, the Rams had to claw from behind, as they trailed the Voyageurs heading into the fourth quarter.

The women’s team’s rookie guards came up with some huge plays in the fourth quarter to push the Rams past Laurentian. Guard Leyki Sorra made three of her four three-point attempts in the quarter, while Marin Scotten scored eight points of her own to propel Ryerson to a nine-point win.

In the men’s game, the Rams faced a six-point deficit until their star guard took over in the fourth. Rams captain Ammanuel Diressa scored 17 of his 20 points in the final frame to put Ryerson over the top and earn the win.

With the victories, the women’s team closes the season with a 13-10 record and the men’s team finishes with a 17-6 mark.

It was more than just a typical game day for the two squads, as the school celebrated the graduating players with a senior night. 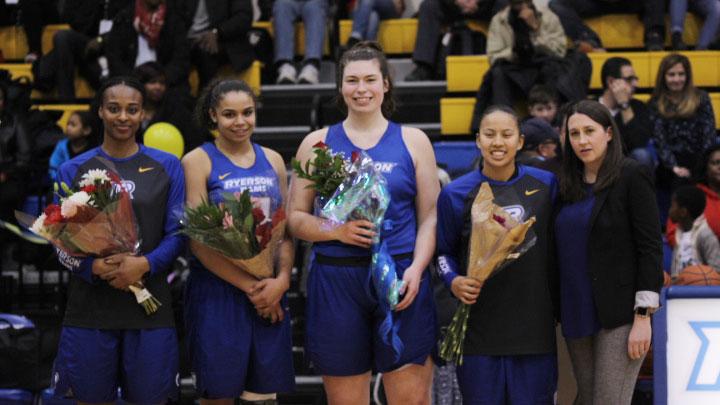 On Wednesday, both teams will host their first playoff game at the Mattamy Athletic Centre. The teams will have to deal with an immense amount of pressure, as the playoffs consist of a single-game elimination format.

The women will look to snap a two-game losing streak against the York Lions, while the men will try to grab their third-consecutive win over the Queen’s Gaels.

UP NEXT: The women’s and men’s games are scheduled for 6 p.m. and 8 p.m. respectively at the Coca-Cola Court.